We use cookies (opens in new window) for a number of reasons, such as keeping FT Sites reliable and secure, personalising content and ads, providing social media features and to analyse how our Sites are used.
Manage cookies
Accept & continue
Artificial intelligence

Google seeks winning formula for the next big thing

Google is widely considered to have some of the most advanced artificial intelligence technology. And with digital platforms like the Android mobile operating system and the Chrome browser, it has ways to reach billions of people.

But can the company find the right formula to turn these advantages into the next hit tech products?

That was the question left hanging in the northern Californian air on Wednesday after the start of Google I/O, the annual developer conference where the world’s biggest internet company previews its most important new products.

Sundar Pichai, chief executive, left no doubt about where he thinks the basis of competition in the consumer tech world is shifting: towards machine learning and other AI technologies that are putting the “brains” into a new generation of services and devices.

In the opening presentation at the event, held for the first time in an outdoor arena next to Google’s headquarters, the company gave a good outline of the “building blocks” that will define this next wave of “smart” consumer technology, according to Julie Ask, an analyst at Forrester Research.

Chief among these is Google Assistant — a new virtual assistant designed to run in the background of a number of different products, answering questions or carrying out tasks for users.

Google has some natural advantages when it comes to a creating a companion intelligence like this, says Ms Ask. It has a vast amount of personal data about its users that helps it understand and anticipate their needs. “They have my calendar, they have my email,” she says.

The company also has been working for years on natural language processing, a key technology for “understanding” people when they use normal language to communicate with machines. Microsoft and Facebook both played up the significance of “conversational” interfaces like this at their own developer conferences this year, but Google is credited with having an edge in this notoriously difficult area.

But if the internet company can boast some impressive behind-the-scenes technologies, it has not been at the forefront of defining how they are used. Instead, that has fallen to rivals, forcing Google into this week’s responses.

The groundbreaking competitors include Amazon’s Echo, a voice-activated device for the home that can be used for things like ordering groceries or summoning a ride on Uber. Though it was widely seen as an oddity when it was launched — and a sign that, without a smartphone platform of its own, the company had been forced into experimenting with more marginal products — the Echo has become a small-scale hit.

Mr Pichai duly gave credit to Amazon on Wednesday as he unveiled a copycat product called Google Home. After years of experimenting with different devices — including the Nexus Q, a media streaming gadget that was killed off even before its official launch — this one, with the new Assistant built in, may finally be a way for Google to put itself at the centre of its users’ home lives.

Facebook, meanwhile, has taken the lead in mobile messaging — which looks set to become the next mobile computing platform — thanks to its Messenger and WhatsApp services. Recent Facebook innovations include M, a service that relies on humans to answer users’ questions but which is intended to switch progressively to AI. The social network also introduced chatbots this year — automated software programs from other developers designed to provide information, help with customer service or support ecommerce.

How will robots really change our world? In this series, the FT finds out, meeting the robots and talking to people already living and working with them.

At the risk of being left behind, Google finally responded with its own messaging service called Allo. Like M, it is designed to respond to text queries with instant answers, though via the AI-fuelled Google Assistant rather than people.

As with other new products and services announced on Wednesday, however, Google did not give a date for when Allo would launch, or indicate how it hoped to win over the kind of mass market it would need to compete with Facebook.

“They don’t need to win” in messaging, says Ms Ask, who predicts that the use of text-based programs to search for information will be an interim step on the way to fully-fledged voice-response systems. She adds, however, that it is important for Google to at least have a presence in this market given the increasing popularity of messaging services.

In another response to Facebook, Google laid out its expected plans for a new virtual reality platform, Daydream. Facebook’s Oculus has stolen a march, launching its VR headset earlier this year and joining forces with Samsung Electroncs — long an ally of Google, thanks to its use of Android — for a smartphone-based system called Gear.

Though VR is still in its early stages, a rapid Google response was essential given its potential to become the next mass computing platform. It came, on Wednesday, in the form of an Android-based platform, with the promise of a number of headsets from hardware makers later this year.

Calling on its massive army of Android developers to create content for its VR devices could give it an immediate edge. However, Google risks antagonising regulators in Europe, who might take a dim view of the way it is using its dominant mobile software to move into an adjacent market, says Geoff Blaber, an analyst at CCS Insight. 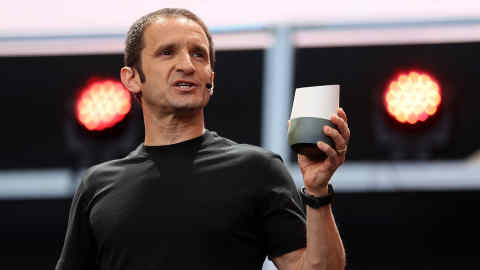 Other new software unveiled at this week’s event also showed that Google is still experimenting with ways to make its services work better in the world of mobile apps — and is willing to jettison even very recent ideas in the process.

The latest plans include a way for people to access apps without needing to download and install them first. Instant Android Apps would rely on developers writing software that essentially breaks their apps into small segments so users would only need a fraction of the software to tap into a particular feature.

The idea would remove the need to install apps — something Google had previously proposed doing by “streaming” apps over the internet from its own servers. It could also solve one of the biggest problems Google has faced with mobile apps: the difficulty of taking users directly to the content they need in an app, much as its search service works on web pages.

If it works, Instant Android Apps could represent an important way for Google to recast the app universe in the web’s image. But like much of the other technology shown off this week, it is unclear when it will see the light of day — or whether users and developers will take to the idea.