Stretching the truth in Chinese literature

The truth can seem so strange as to be unbelievable in China these days. Consider some surreal events that have made the headlines in the past year: escalators swallowing people up, sickening miasmas rising up from school running tracks, a sports stadium flooded with water like a giant swimming pool. And dissenters mysteriously vanishing, only to reappear and denounce themselves on state television.

So what is a fiction writer to do in a country where even the daily news reads like magic realism?

“Impossible things happen in China every day,” says Yan Lianke, who was born in an impoverished village in Henan province in 1958. He grew up during Mao Zedong’s Cultural Revolution, which sought to replace traditional Chinese culture with Maoist ideology.

Yan joined the army as a teenager in order, he says, to get three square meals a day. Now 58, he has become one of China’s bestselling (and most often-banned) authors. “What we see is usually the external truth; the inner truth is usually hard to find — but this inner truth is precisely what literature should grasp,” he says.

Sixty-seven years of Communist rule have provided both foil and fodder for Chinese novelists. Their work is tolerated by the state as long as subjects are tackled obliquely — and routinely banned when they dare to be more direct.

The American sinologist Perry Link coined the metaphor of “the anaconda in the chandelier” to illustrate the dilemma of self-censorship that grips China’s editors, writers and journalists. Conscious always of the beast coiled above them, most internalise the rules of what cannot be written, thus sparing the censor his job, he argued.

The incentives to self-censor are obvious. A writer whose creativity finds expression within (or just outside) the bounds of what is permissible can live very comfortably. Yan believes that Chinese literature pays a price for self-censorship, however, in terms of diminished international influence.

Chinese authors view Link’s anaconda in a different light. They focus on what they can say, rather than on what they cannot. Many writers remember a time when they could be severely punished even for what was in their notebooks. Nowadays, they say, the question is not so much what they are allowed to write but what they may publish.

In response, some aim for what the feminist novelist Xu Xiaobin describes as “a coherent story and a deeper layer for wiser readers”. Her female characters experience history that is very different from the version taught in state-approved textbooks.

Xu, Yan and fellow novelist Yu Hua have each chronicled some of modern China’s most turbulent times in their fiction. All three were teenagers during the tumultuous Cultural Revolution and came of age as writers in the 1980s, when foreign ideas of every stripe began to flood back into China. Their generation was defined by the protests in Tiananmen Square in 1989 and the bloody crackdown and years of repression that followed.

They have tested — and sometimes crossed — the boundaries of what censors will allow for most of their writing lives. Over the past three decades, those boundaries have retreated as Chinese society has liberalised at a dizzying speed. 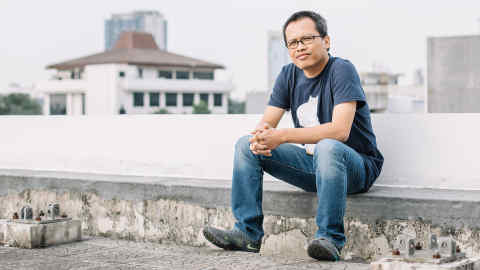 Now a new cycle of tightening has begun. Influential liberal voices in civil society have been silenced or jailed as President Xi Jinping roots out factional opponents in the party and the military. Daring publishers have been prosecuted for corruption. The Chinese internet once hosted a cacophony of voices absent from the staid official media, including witty social critique. Now it is awash with “red posts” by nationalistic leftists who denounce the intellectuals as “rightists”.

The watershed for intellectuals came in October 2014, when artists were ordered to study a speech on literature and art delivered by Xi that consciously harked back to Mao Zedong’s 1942 “Forum on Literature and Art”, which foreshadowed the Communist party’s subsequent war on intellectuals.

The text of Xi’s speech was not made publicly available until late 2015. But when it was, his take on contemporary literature caused many to shiver. The president denounced works that “ridicule the sublime, warp the classics, subvert history or defile the masses and heroic characters” and those wherein “good and evil cannot be distinguished, ugliness replaces beauty and the dark side of society is overemphasised”. Instead, he decreed, writers should produce works with “positive energy”.

Getting work published under these conditions is a game in which literary daring sometimes wins, thanks to shifts in the political winds or commercial publishers’ need for a bestseller. The existence of literate and wealthy Chinese societies just out of reach of the Communist state — Hong Kong is no longer the safe haven it once was, but there is still self-ruled Taiwan — means books banned in China can still find their way to a Chinese audience.

Authors and publishers must now reassess what can and cannot be published in China. Some, like Xu, whose writing relies on dreams and symbolism, are experimenting with genre. She has responded by trying her hand at fantasy. “Right now I am escaping a little,” she says. “I have a lot of thoughts I can’t write out.”

Chinese society is always like this. You loosen, things get chaotic. You tighten, society starts to die

Yu Hua, best known in the west for his 1990s epic To Live, believes his recent novella The Seventh Day could not be published today (it came out in 2013, just before Xi’s tightening began). It is a satirical tale of the sort of social injustice that appears frequently in the daily papers, narrated by a corpse awaiting its own burial.

But Yu is taking the long view. “Chinese society is always like this,” he says. “You loosen, things get chaotic. You tighten, society starts to die.” The idea that this phase could last even as long as a decade he views as “a little pessimistic”.

He recalls that, in 1987, his short stories had just begun to find an audience when all his commissions were cancelled following the fall of the reformist leader Hu Yaobang. In despair, the young writer walked all day across Beijing and back. “I knew if I stayed in the dormitory I could not bear it. I had to keep walking all the time. I felt that I was so close to getting famous and then all of a sudden it was all over.”

The lasting impact of the current crackdown will not be on Yu’s generation but on a younger crowd coming to grips with its own inner truth in a modern society where politics is often more unpredictable than fiction. Propaganda might be misleading but has a basis in reality, Yan says. “So many things we see on TV seem fake, but that doesn’t mean that they don’t exist.”

Get alerts on Yan Lianke when a new story is published