Is the retail industry enjoying a renaissance?

Retailers are proving that, with innovation, it is possible to thrive in the internet age
Brooke Masters

By all accounts, the retail sector in most of the world is struggling. Rising competition from online shopping has hit bricks-and-mortar retailers hard. Environmental concerns have led customers to question traditional packaging and farming practices. And the growing preference of many consumers, particularly younger ones, to favour “experiences” over stuff has eaten into overall demand.

We see the bad news everywhere: Sears, Nine West shoes and David’s Bridal all filed for bankruptcy in 2018. In the UK, House of Fraser and HMV were each sold for a song. The insolvencies are striking up and down the value chain, from designer BCBG Max Azria to discount shop Poundworld. With these failures came job losses and further pressure on malls and high streets as shoppers had fewer reasons to visit.

Yet with adversity comes opportunity. Whenever a sector is under pressure, it gives those with creative solutions a chance to shine. Amazon emerged stronger from the 2001 dotcom bust, and decades earlier the big three US carmakers ultimately improved their offerings when their dominance was challenged by better-made Japanese imports.

There is some hope that we may be seeing that kind of resurgence today. So many of the strongest candidates for this year’s Boldness in Business awards were retailers that one of the judges was moved to observe that we might be seeing a “retail renaissance”. The winners impressed us with how they have responded to everything from supply chain challenges to environmental degradation.

Two of our winners emerged from the groceries sector, which has been hit especially hard by changing shopping habits, concerns about waste and squeezed margins. Amazon’s entry into the sector, as well as the spread of discount chains such as Lidl and Aldi, have put pressure on supermarket groups to cut costs and improve convenience.

Ocado, the UK online grocer and winner of the technology category, has been around for 19 years. But it has come into its own in the past two years, winning contracts to set up robotic warehouses and e-delivery services for competitors, including Wm Morrison in the UK, Casino in France, Sobeys in Canada and Kroger in the US.

Under the deals, Ocado will roll out the robotic technology it developed for its own business to improve the online services of other retailers. In other words, it has created a bright spot in the general retail gloom by helping less technologically advanced companies adapt to the shift to online shopping that is damaging so many of its competitors.

News in-depthRetail sector
Can tech save bricks and mortar retail? 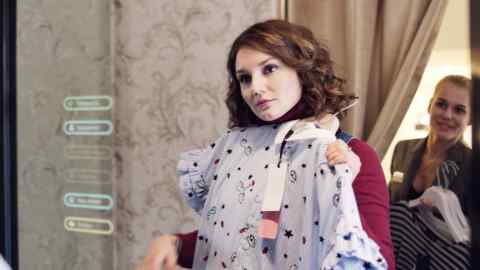 The other winner from the grocery sector, Iceland Foods, took the corporate responsibility/environment prize for its efforts to fight plastic waste and the environmental degradation associated with the use of palm oil.

Based in the UK, Iceland focuses on value and frozen food. It has long sought to woo customers concerned about health and the environment — during the 1980s it was the first big UK supermarket to remove artificial colourings and non-essential preservatives from food and to ban genetically modified food.

For this year’s awards, it caught the judges’ eye for its #TooCoolForPlastic campaign to replace all plastic in its own-brand packaging within five years. It has stopped offering single-use bags, removed plastic from 85 per cent of packaging, including egg cartons, and trialled reverse vending machines that give customers a 10p voucher for each empty plastic bottle they put in.

Fast Retailing is leading the way in automation

Iceland’s campaign against palm oil, which saw it remove the ingredient from its own-brand foods in 2018, received a big boost when advertising regulators banned its Christmas advert for being “too political”. The video, which features an animated orang-utan and highlights the problem of deforestation, has received millions of views on YouTube and social media. Iceland’s next effort will be to promote sustainable fishing by selling “by-catch” species of fish that are caught unintentionally and usually thrown back into the sea as they are considered uncommercial.

The campaigns have helped this relatively small player stand out — like-for-like sales rose 2 per cent in the last reporting period and Iceland was named the UK’s top supermarket for customer service for the second year in a row, scoring highly for “emotional connection” and “ethics”. The results suggest retailers can prosper in competitive markets when they offer shoppers a real reason to buy there.

The final retailer to win in this year’s competition, Fast Retailing, took the prize in the “Drivers of change” category. Owner of the Uniqlo, Theory, J Brand and Comptoir des Cotonniers brands, Fast Retailing is the world’s third-largest seller of casual fashion, behind Zara, owned by Inditex of Spain, and H&M of Sweden.

Unlike those fast-fashion chains, which restock daily and have been criticised for encouraging waste, Fast Retailing offers fewer but more classic pieces — ones that are designed to last several seasons but are affordable because of the company’s efforts to keep costs down. One of the first Japanese retail groups to go global, Fast Retailing is now leading the way in automation. It has set a target for annual revenue of ¥3tn ($27bn) by 2022, up from the ¥2.3tn projected for 2019.

Ocado, Iceland and Fast Retailing are all well positioned to appeal to millennial customers, who do proportionally more online shopping and place greater emphasis on wanting corporate values that reflect their own. These companies serve as a reminder that when change hits hard, well-run, well-positioned businesses are the ones that benefit.