Masters of rap could help bridge the financial literacy gap

These artists may be living large, but many of them are very financially savvy
Rhymer Rigby

Rappers are probably not the people who spring to mind first, or even second or third, when you think about who you might turn to for financial advice. In fact, quite the opposite. In the popular imagination, they are seen as the epitome of reckless consumption — driving round in Bentleys, dripping with jewellery, swigging Cristal in hot tubs on superyachts.

Take Kanye West, who is reported to spend $500 a day on haircuts and have a recreation of the Sistine Chapel’s ceiling in one of his many homes — with him as an angel, naturally. And the list of bankrupt rappers is equally storied. Probably the best known is 50 Cent, whose studio debut Get Rich or Die Tryin’ was the bestselling US album in 2003. In 2015, he filed for Chapter 11 reorganisation before later paying off his $22mn debt and securing a discharge.

Yet, I am currently watching a video in which Kendrick Lamar (who recently wore a Tiffany diamond-studded crown of thorns on stage) is paired up with Ray Dalio, the 73-year-old billionaire investor and hedge fund manager. Their mission: improving financial literacy.

Comedian ExavierTV starts with an impassioned spiel in street slang about having come into money, which he intended to put into a barber shop. He then lost it all, playing dice with a friend called Peanut. This is translated into plain English by Kendrick Lamar for the benefit of Dalio, who offers his take that you should avoid the lure of easy fast returns and exploit compound interest. “Basically, what [Dalio] is sayin’, bro, is that slow money wins the race,” explains Lamar.

Lamar is not the only rapper on a mission to educate his fans about money. Lecrae, a Christian mainstream crossover rapper, has partnered with the credit reporting company Experian. The approach here is more straightforward: Lecrae talks directly to camera about the importance of credit scores in a relatable way.

A third, slightly different example is Jay-Z and his Bitcoin Academy with Twitter co-founder Jack Dorsey — a series of courses offered free this summer to tenants of Marcy Houses, the Brooklyn public housing estate where Jay-Z grew up. Of course, the recent crash in the price of Bitcoin is not a great advertisement for crypto. But, for all its faults, Bitcoin has also reached demographics that share ownership never has, so perhaps the idea of using it as a gateway to financial literacy has value.

These make an interesting contrast to traditional financial literacy efforts, many of which can be worthy and dull. There are plenty of books. There are boosterish videos that feel like sales seminars (such as Grant Cardone’s) and which, naturally, focus on emulating the habits of Jeff Bezos and Elon Musk. You can watch speeches by Warren Buffett, and very good they are too. But somehow, I doubt many financially disinterested 19-year-olds will be doing this.

If someone can see a bit of themselves in Kendrick Lamar, then his financial advice will lodge in their consciousness a bit more

One of the more interesting initiatives comes from the bank Santander, which teamed up with British television personalities Ant and Dec to make a jokey video aimed at schoolchildren. It is aimed at a younger audience than the rappers’ videos, and the message gets a bit lost in the joke, but it is fun and user-friendly. This is the biggest challenge. Learning good money management is unexciting and easy to put off for years, so young people especially, tend not to.

Polly Gilbert, chief marketing officer at mortgage broker Tembo, says low financial literacy is a problem. “We speak to people all the time who have no understanding of the financial basics, such as how mortgages and interest rates work. It’s clear that the younger generation are not learning about this or necessarily prioritising it,” she says.

It is true that financial literacy videos featuring rappers might be seen as rather self-promoting for the artists, but I am not sure this matters. With most rappers, off-the-scale self-promotion is part of the package and, besides, with financial literacy you want to get the word out. Quite a few rappers do give something back more discreetly — Drake and Diddy are well known for their philanthropy while Eminem gives quietly without making a fuss about it.

And, although they often live large, many are very financially savvy. I recall once catching an interview with Eminem in which he started talking about his pension. The rapper-to-entrepreneur pipeline is well established. Jay-Z is a billionaire, largely through his non-music business activities, as is Kanye West. Snoop Dogg turned his passion (marijuana) into a business with his Casa Verde venture capital fund. There are dozens of others.

Are people like this more likely to cut through to those with low financial literacy than most of the Forbes rich list? I suspect they are, even if their lifestyles may seem at odds with espousing good sense around money. As Gilbert says: “If someone can see a bit of themselves in Kendrick Lamar, then his financial advice will lodge in their consciousness a little bit more.”

To find out how you can support the FT’s Financial Literacy and Inclusion Campaign, visit ftflic.com

This article is published by FT Wealth, a section providing in-depth coverage of philanthropy, entrepreneurs, family offices, as well as alternative and impact investment 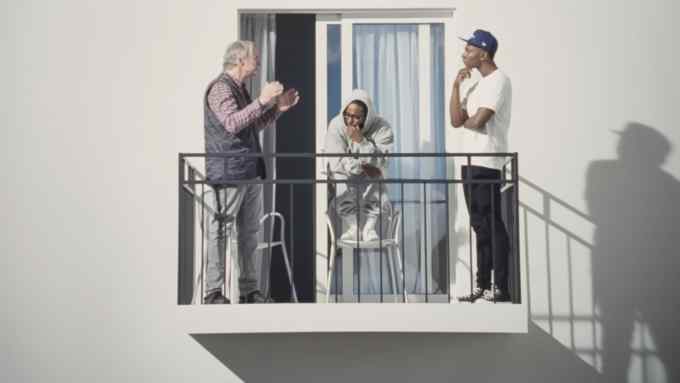