Apple’s ‘most valuable’ crown at risk

Apple is still the world’s most valuable company — by the skin of its teeth.

But Wall Street has been engaged for months now in a battle for supremacy that could see the iPhone maker lose the position it has held for the past four years in one of the tech industry’s periodic changes of leadership.

A renewed shiver of concern about the outlook for iPhone sales sent Apple’s shares down more than 2 per cent on Thursday, to $90.32, or 32 per cent below the peak they hit almost exactly a year ago.

Though the shares rebounded a bit on Friday morning, Apple’s market capitalisation of $500bn was only about $600m–or 0.12 per cent– above that of Alphabet, the parent company of Google, effectively putting the two companies neck-and-neck.

Video: Google vs Apple, Round 2

Investors have been struggling since early this year with whether the rivalry between the world’s biggest consumer products company and its largest internet concern should yield a clear winner.

Stripping out their respective net cash positions — the truest measure of the respective value of their businesses — Alphabet surpassed Apple in January. Days later, it also briefly passed Apple in terms of market cap, or the value of all its outstanding shares, the more widely followed yardstick.

That was shortlived, however, and it is only now that Alphabet is once again vying for the lead.

The latest tussle for the crown of “most valuable” has been touched off by new worries about the iPhone. Apple’s shares have fallen 13 per cent in the two weeks since it reported its first-ever fall in smartphone sales and put out a very cautious forecast for the current quarter.

Thursday’s stock price decline followed a report by Nikkei, owner of the Financial Times, that chipmaker TSMC was cutting production targets because of weaker iPhone demand in the second half of the year.

However, despite marking down the shares, most analysts are still optimistic about a rebound in Apple’s stock price once the iPhone reaches its next replacement cycle, following the launch of the iPhone 7 later this year.

Kulbinder Garcha, analyst at Credit Suisse, said in a note to investors that a potential 20 per cent cut in iPhone production from a year ago was “clearly disappointing”. But he left intact his prediction of a 12 per cent bounce in iPhone sales next year — along with a share price target more than 60 per cent above its current level.

As a result, the severity of the iPhone’s cyclical sales pause, and the strength of a possible rebound in 2017, have become the most important factors in determining whether or not Apple will keep its “most valuable” title this year and next.

But in the background, two more secular forces have also been behind the relative rise of Alphabet, and could point to a more definitive change in leadership in future.

One concerns the broader outlook for mobile computing. Even if Apple’s hardware sales recover next year, the growing saturation in the smartphone market means that much of the growth in the mobile industry will swing to services — one reason Apple has itself been emphasising its service revenues this year. And when it comes to services, Alphabet — along with Facebook — is among the companies best positioned to capitalise.

Companies
Apple ramps up business push for iPhones and iPads 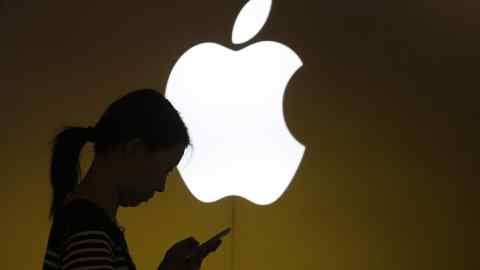 Mobile advertising and YouTube, which has thrived on mobile devices, represent two powerful growth drivers that should continue to lift Alphabet’s stock price in the near term, said Youssef Squali, an internet analyst at Cantor Fitzgerald in New York.

The other question for Apple and Alphabet is whether they will be able to find new, long-term growth engines as their core businesses — smartphone sales and search advertising, respectively — slow.

On Friday, Apple revealed that it would invest $1bn in Chinese ride-hailing company Didi Chuxing, a major rival to Uber.

Research and development spending at the company has also continued to rise rapidly in recent months, stoking hopes that ambitious new products are coming closer to fruition. R&D jumped by nearly 30 per cent in the past six months, to $4.9bn, even as sales declined. But with Apple needing a giant success to move the needle for a company whose sales reached $233bn last year, the success of the iPhone will he hard to repeat.

For Alphabet, meanwhile, cloud computing could now loom as a significant catalyst. Having watched as Wall Street last year gave Amazon credit for taking the lead in this new market, adding $180bn to its stock market value, Google has made a renewed attempt of its own.

There has also been no shortage of “moonshot” projects, from driverless cars to the search for a cure to ageing, that could represent big opportunities in the long term.

Wall Street, however, is not yet ready to give the company credit for what Alphabet calls its “other bets”. Instead, last year’s re-rating of the company’s shares reflected new confidence in a growing financial discipline at the company.

For any company that becomes the world’s most valuable, said Mr Squali, commentators will inevitably speculate about whether their value can reach $1tn. “Becoming the largest market cap is something of a curse — be careful what you wish for,” he said.