British football fans are no strangers to humiliating exits from Europe but now those fears have taken on a political dimension.

Karren Brady, vice-chair of West Ham football club and a key member of the Britain Stronger in Europe campaign, has warned of “devastating consequences” for the game if the UK votes to quit the EU.

Lady Brady said that, in the event of a Brexit, English clubs would find it harder to attract international players while fans will be stung by higher costs when travelling to games on the continent.

“Players from the EU can sign for UK clubs without needing a visa or special work permit, making it quicker and easier to secure top talent from across Europe to come and play in our leagues,” Lady Brady wrote in a letter to football club chairmen.

“Losing this unhindered access to European talent would put British clubs at a disadvantage compared to continental sides.”

Lady Brady claimed almost 200 Premier League players would not be eligible to work without the freedom of movement guaranteed by the EU. Fans would be hit by higher costs for away games, she said, while grassroots football would be deprived of European cash.

“Clubs and fans all benefit from European action, laws and funding. Leaving the EU would hurt our leagues, create uncertainty for European transfers and be a step back for the next generation of footballers,” said Lady Brady.

However, he noted that any changes to visa rules were unlikely to be applied retrospectively.

“I don’t think it’s being suggested that people would have to pack their bags and head to Dover,” said Mr Chapman.

The so-called Bosman rule that allows players to move club freely once their contracts end was unlikely to be affected, he added.

Under the current system, non-EU nationals must prove themselves to be of the “highest calibre” to qualify for a visa, typically defined by representing their country. A handful have used backdoor routes, such as being bought by an English club and then loaned out to an EU country with less stringent requirements, in the hope that they go on to become an international.

Those without an EU passport wanting to work as managers need to hold the top Uefa licence or equivalent, have managed in a top league for at least two of the past five years or managed an international team ranked 70 or above.

The wealth of foreign players in English football has become a contentious subject, with some arguing that young British players have been displaced by the influx of overseas talent and not progressed to the first team.

England has not made it to the final of the European football championships in more than 50 years of trying, while Scotland has failed even to qualify for two decades.

Vote Leave, a group that wants Britain to leave the EU, described Lady Brady’s letter as “scaremongering”, and said some of the research cited in it rested on “highly questionable assumptions”.

Football is just the latest battleground for Brexit campaigners. Bankers, lawyers and pharmaceuticals executives have come out in favour of staying in the EU, lending support to a campaign led by Stuart Rose, former Marks and Spencer chief executive. Those wanting to leave the union won a high-profile ally last week in Sir Michael Caine, the actor. 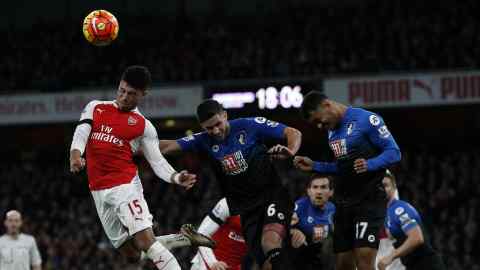 Despite England’s dismal performance in international competitions, and recent failures at club level, the Premier League has come to dominate the world of football, at least financially.

From next season, the value of domestic broadcasting rights alone for England’s top tier will rise to €14m per game, according to KPMG, compared with €2.9m for a Spanish La Liga match, and €2.5m for a Serie A tie in Italy. Of the world’s 20 richest clubs, nine are English, according to Deloitte’s annual league table.

However, the league has become heavily dependent on foreign talent on the pitch and in management. Only seven of the Premier League’s 20 managers are British, while the top goalscorers for the past 15 seasons have all been foreign.