On Monday morning, at a hall in the heart of Tokyo’s financial centre, around 600 leading figures from industry, diplomacy and academia gathered for a sumptuous celebration of 100 years of business ties between Japan and France.

Attended by executives of LVMH, Airbus, Dassault and Veolia, the keynote speakers came from that ultimate symbol of Franco-Japanese co-operation — the Renault-Nissan alliance. First up was the Nissan chief executive, Hiroto Saikawa, followed by Renault’s honorary chairman, Louis Schweitzer — the 78-year-old former president who had masterminded the French company’s rescue of Nissan in 1999.

Both speakers knew that behind the scenes, the alliance was in torment, buffeted between controlling ambitions from the French side, seething resentments in Japan and a leader appearing to treat a massive global corporation as his personal fiefdom.

Yet only one of the two men at the podium knew about the bomb that was about to detonate that afternoon, orchestrated in part by Nissan, that would send shockwaves across the global carmaking industry — the arrest at a Tokyo airport of Carlos Ghosn, the highest-profile icon of Franco-Japanese ties. On Thursday, Mr Ghosn was ousted as chairman by the Nissan board.

“They’ve just assassinated Caesar,” says CLSA’s Japan analyst Christopher Richter. “It’s hard to imagine how you have a coexistence. It seems that without having Ghosn’s hands on the rudder to gently navigate these ships and keep them from colliding, the situation will drag you towards extreme events.”

Mr Ghosn was the obvious figure to front Monday’s event: he was the person Mr Schweitzer had installed as Nissan’s chief executive 17 years ago. He became not just the symbol of that corporate alliance, which includes Mitsubishi Motors, but of a daring, tradition-busting new era of foreign leadership at Japanese companies.

As Mr Saikawa was delivering an upbeat speech, he knew that Mr Ghosn — his chairman, mentor, the man whose every utterance he had closely studied and to whom he owed his position — was in the air between Beirut and Tokyo en route to his downfall. Mr Ghosn had no idea of the ambush that awaited, but nor did anyone at Renault. If they had, said one person close to Mr Ghosn, “he would never have got on the flight”.

Mr Ghosn, who never planned to be at the anniversary event but was instead heading to dinner with his daughter in Tokyo, was aboard the alliance’s private jet with the tail number NI55AN. It was a plane that, in the view of former senior staff, he had long ago come to think of as his own.

That assumption, they added, had become part of a pattern of behaviour over Mr Ghosn’s two decades in charge, which, according to one person familiar with details of Thursday’s emergency board meeting, made it impossible not to vote for his dismissal.

The Japanese authorities arrested Mr Ghosn on suspicion of submitting company accounts that understated his salary by $44m over five years. Born in Brazil to a family of Lebanese immigrants, Mr Ghosn faces allegations that he used a subsidiary in the Netherlands to buy personal residences in Beirut and Rio de Janeiro. There are also questions over a $100,000-a-year consulting contract signed between Mr Ghosn’s older sister and Nissan, although there was no evidence of any actual work being done, according to a person with knowledge of the findings of a Nissan internal investigation handed to Japanese prosecutors.

Mr Ghosn is also suspected of transferring some of the remuneration of other directors on Nissan’s board to increase his own pay, the person adds.

On Monday evening, after word of Mr Ghosn’s arrest had broken, and a reception held by the French ambassador had been disrupted by mobile news alerts and panicked text messages to Paris, Mr Saikawa held a press conference. He used the occasion to eviscerate Mr Ghosn, condemning the effects of his long stay in power and declaring his own feelings of “despair, frustration and indignation”.

When the plane landed at Haneda airport, say people briefed on the matter, it was boarded by Japanese prosecutors and Mr Ghosn was held for three hours. In the Moto-Azabu district of Tokyo, Mr Ghosn’s apartment was being searched and in Yokohama, prosecutors were visiting Nissan’s headquarters. All extraordinary enough, but even more remarkable was that journalists from a Japanese newspaper were also on the runway apron, fully briefed in advance.

The implication — that either prosecutors or Nissan had informed parts of the Japanese media — was the first indication to many observers that Mr Ghosn’s downfall was part of a planned sequence of events with a distinct agenda.

The fact, said one person close to Mr Ghosn, that this was the chairman’s last planned visit to Japan before next February is significant: it shows how withdrawn from Nissan’s headquarters Mr Ghosn had become, and may also have convinced prosecutors that this was their last chance to pounce.

The sense of a closing net clearly rattled people around the Nissan chairman: two who commonly travel in Mr Ghosn’s entourage both left Japan within hours of the arrest, according to multiple sources. In Paris, Renault and the French government are doing their best to put on a brave face, saying the alliance is strong enough to survive without Mr Ghosn at its head and dismissing so-called “conspiracy theories”.

When Nissan’s nine-member board met on Thursday, Mr Saikawa and an official from the legal division spent more than an hour trying to explain the allegations behind Mr Ghosn’s arrest to two former Renault directors via a video conference.

“The findings so far are appalling but this is just a part of the whole story,” a person close to Nissan’s board says.

Many questions about his arrest remain unanswered, which has created a void into which voices from both inside and outside the Renault-Nissan alliance have fed a number of theories about who might have wanted Mr Ghosn out, who will lose and what level of government support underpins the various positions. The theories mostly end in a conclusion that the days of the alliance in its current form are numbered, and that its structure is no longer able to contain the rifts.

To those who argue that Mr Ghosn was simultaneously both the source of tension and the glue that bound the alliance together, his departure makes the immediate future even harder to read. “For years Ghosn protected Nissan from Renault. For Saikawa to remove that is a very big roll of the dice. They are now relying on the Japanese government to protect them,” says one former Nissan executive.

The ousting of Mr Ghosn came against a backdrop of developments that have strained his relations with Mr Saikawa, the once-loyal protégé who had taken over as Nissan chief executive last year.

During his period in charge, the Japanese group has seen profits hurt by a slowdown in the US and China, while it was hit at home by two scandals involving falsified fuel economy data and faulty vehicle inspection procedures.

“Mr Ghosn is unforgiving when it comes to missing financial targets,” says one person close to Mr Saikawa, though the group repeatedly missed goals set under Mr Ghosn’s regime as well.

“This was Saikawa striking first,” says one former executive, noting that Mr Ghosn would ordinarily have addressed the poor profit performance and engineering issues that have hobbled the company during Saikawa’s tenure “by changing Saikawa”.

But people who have worked with Mr Saikawa say it was unlikely Mr Ghosn’s exit was driven solely by the Japanese chief executive. Instead, frustration inside Nissan had been accumulating over the years as the alliance at Renault became more about bolstering its weaker French partner. Mr Ghosn was reported to have been planning for a merger of Renault and Nissan.

After emerging from the brink of bankruptcy in the early 2000s, Nissan has become the larger company, with its profits contributing more than half of Renault’s €5.2bn in net profit last year. Yet the French company has 43 per cent of Nissan’s shares and voting rights, compared with the Japanese group’s 15 per cent non-voting stake in Renault.

Since Mr Ghosn stepped back from day-to-day management, the French company has also become more emboldened in its dealings with the alliance, to the consternation of colleagues at the Japanese business, according to multiple people. 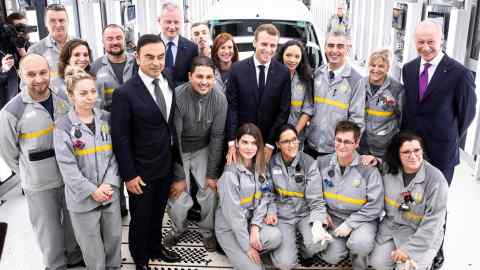 Some of the clearest signs of this growing confidence were in Renault’s home territory of Europe, where the two brands overlapped directly.

Within a year of Mr Saikawa’s appointment, several members of Nissan’s European board were replaced by former Renault executives.

“The signs were there, everybody knew it,” says one person familiar with the business.

On Saturday, a corporate titan who enjoyed every trapping of running a global company will endure his fifth day in a tiny, spartan cell at the Tokyo Detention House — a modern but bleak building where all are treated the same and exceptions will not be made, even for inmates who arrived in the country in a company jet. 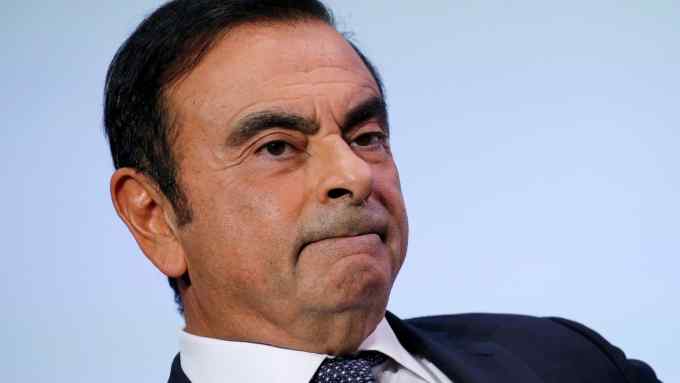 Shifts in influence are to the fore as President Trump squabbles with China and Europe, the UK struggles to grasp its post-Brexit role and, in the corporate world, Carlos Ghosn is ousted at Nissan. Here’s the best of this week’s comment and analysis