Bank of America’s David Leitch on legal firefighting during Covid

Sign up to myFT Daily Digest to be the first to know about Banks news.

For David Leitch, the job of general counsel at Bank of America was a busy enough job before the Covid-19 pandemic. But, almost overnight, Leitch and his team had to grapple with the legal practicalities of most of the bank’s 200,000-plus workforce working remotely.

“The things that we were doing before Covid are overwhelmed by the experience of the past 15 months,” says Leitch. “Many times I’ve asked myself: ‘What were we doing before we were managing this crisis?’”

Early on in the pandemic, Bank of America had to address a host of legal questions, including what home-working employees were allowed to do and how records must be kept, all while collaborating with human resources on support programmes. These included offering staff $100 per day for in-home child care.

The bank — the second-biggest in the US by assets — also helped arrange for 343,000 loans under the US government-backed Paycheck Protection Program, designed to help cover jeopardised payrolls at struggling small businesses. At the same time, the bank worked on deals for large corporate clients that raised a total of $772bn in capital.

“I’m extremely proud of the way both the legal organisation and the entire enterprise moved quickly into the remote work environment last spring,” Leitch says.

Up to 90 per cent of the bank’s employees worked from home for an extended period of time during the pandemic. Leitch, who is married with three adult children, split his working life between his residence in Charlotte, North Carolina, where Bank of America is based, and a home in the mountains a couple of hours outside of town.

He had joined Bank of America as its general counsel in 2016 after a decade with Ford Motor Company.

After graduating from Duke University and the University of Virginia School of Law, Leitch started his career as a law clerk on the US Court of Appeals for the Fourth Circuit and the Supreme Court.

He later moved to the Federal Aviation Administration, where he was chief counsel at the time of the 9/11 terror attacks on the US in 2001. He then moved into politics, serving as deputy counsel to President George W Bush.

At the FAA, Leitch says, he learned that organisations need to be nimble during a crisis, to respond quickly to changing situations, and to be as transparent as possible with stakeholders.

“We’re dealing with a lot of that in the current pandemic,” he says. “There’s been a lot of uncertainty along the way.”

Many times I’ve asked myself during the past year, ‘What were we doing before we were managing this crisis?’

Acting with transparency, Leitch says, has been the most important lesson of his career so far.

In his first few years at Bank of America, overseeing a legal department that now has 1,000 or so employees, he spent the first few years focusing on “operational excellence” — which he describes as trying to cut bureaucracy while still effectively managing risk.

Today, in addition to managing the fallout from Covid-19, Leitch and his team are focused on a string of other challenges that will test banks for years.

These include, for instance, providing banking services to marijuana-related businesses in states that have made the drug legal under local law, even while it remains illegal under federal law; dealing with special purpose acquisition companies (Spacs) on Wall Street, which are facing regulatory and accounting pressure; and reacting to the growing popularity of cryptocurrencies.

In all these areas, Leitch says, the bank’s leaders fall back on a lesson learned from the financial crisis: that chasing certain dollars is just not worth the risk.

“We constantly remind ourselves that just because somebody else is doing a business doesn’t mean it’s the right thing for Bank of America,” he says.

Financially, Bank of America emerged from 2020 in solid health, lowering its leverage levels, bolstering capital ratios, and limiting the fall in its revenue to only 6 per cent — to $85.5bn for the full year. It began this year strongly, too, with net income more than doubling to $8bn in the first quarter, thanks to an improving outlook for loan losses.

Now, the most pressing concern for Leitch and Bank of America is how to manage the move towards some sort of normality after the pandemic.

Here, the bank is grappling with what requirements to set for returning employees, what seating arrangements should be, what questions the bank can ask staff, and how to treat employees who are vaccinated and those who are not.

“What worries me most as I sit here today, as a manager of a large department [and] as a member of the management team of a large enterprise, is how we make sure that we transition appropriately from working from home to working back in the office,” Leitch says.

“It’s really important for us to get back together for all sorts of reasons. But I also recognise that the process of getting us back together, for many individuals, is [one] they’re going to have to work through.” 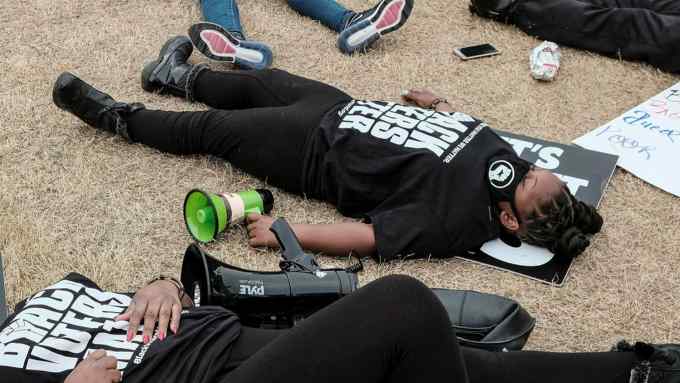