We use cookies (opens in new window) for a number of reasons, such as keeping FT Sites reliable and secure, personalising content and ads, providing social media features and to analyse how our Sites are used.
Manage cookies
Accept & continue
Special Report Technology

One of this summer’s most surprising blockbusters was Warcraft, a fantasy film based on a computer game, which bombed in the US but was a smash hit in China.

The Hollywood Reporter called Warcraft “the most lopsided Hollywood release in modern times” because it had taken only 11 per cent of its box office in the US — $46.6m — but racked up more than $220m in the Chinese market.

Matthew Marolda, chief analytics officer of Legendary Entertainment, the studio that made the movie, can explain at least part of the disparity, and it is not just that Chinese movie-goers are nerdier computer-game fans.

Mr Marolda runs a 70-strong data team, headquartered in Boston, whose remit includes advising on how to market Legendary’s output. In China, unlike the US, he had access to detailed data on who was buying advance tickets for Warcraft, allowing his team to target similar fans with teases for the film.

It also helped that Legendary was bought in January by Dalian Wanda, the property and entertainment conglomerate that runs China’s biggest cinema chain. “Because of our partners in China, we got data from the advance ticket sales,” he says. “China is much more digital and people tend to buy their tickets more in advance because of price incentives.”

Using those profiles, he went to a database of other likely fans and homed in on them. “We pour out cash to advertise [our films] on television in the US,” he says. “In China, you can be so much more digitally-oriented and the cost is so much lower.” China pulled in half Warcraft’s overall box office of around $433m. “Analytics is a broad toolset that can change outcomes. There is never a situation that it doesn’t change,” he says.

Mr Marolda, who joined Legendary after starting a company specialising in sports analytics and dynamic pricing, is an example of how Hollywood is fine-tuning its use of data. As in many creative industries, there has been initial caution over how to incorporate this new tool. Mr Marolda says that while writing and directing movies are “sacrosanct” processes that he does not try to influence, he can offer insights.

In another Legendary film targeted at China, The Great Wall directed by Zhang Yimou, Matt Damon was cast as the lead after he “over-indexed in web searches in China” compared to rivals, says Mr Marolda.

His team is involved at the start of the film-making process, in evaluating concepts, in working out likely audiences and in casting decisions, but steps back while the movie is made. Afterwards, the team can help shape a film’s direction in post-production and decide on a targeted marketing strategy. 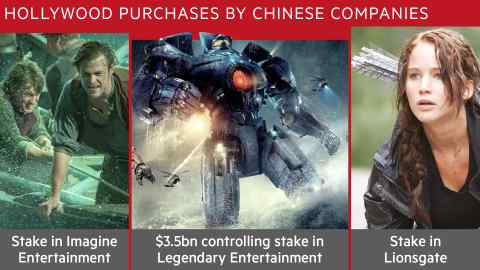 As trailers for a film hit the internet, his team analyse their reception in real time, crafting new messages to try to reach those people who can be convinced to buy a ticket. Typically, a movie has a marketing campaign costing tens of millions of dollars that runs for a couple of months before and during the release: this means the team must respond rapidly to new data to help the film catch the limelight.

Ahead of last year’s reboot of Star Wars, Disney analysed every angle of the movie from a social media perspective, Wayne Peacock, the studio’s vice-president of analytic insights, told the Variety Big Data Summit last November. “It is such a massive amount of data — it is energising to my team,” said Mr Peacock, who previously worked for Visa and Netflix.

Star Wars: The Force Awakens flouted conventional movie-marketing wisdom by keeping most of the film’s details under wraps. In trailers and TV commercials, Disney showed just half the footage it would normally reveal for a release. Instead, the campaign reassured film-goers their experience would mimic that of the original Star Wars trilogy.

Legendary has spent heavily to build a database that covers the whole of the US while also breaking down the population into small segments. The database is built from dozens of sources, Mr Marolda says. “There are many things that people declare digitally that are out there in the public domain. But we do not target people individually, we cluster them into microsegments and then try to reach them through social media, search, display advertising and sometimes television.”

Film
Is it curtains for the big screen? 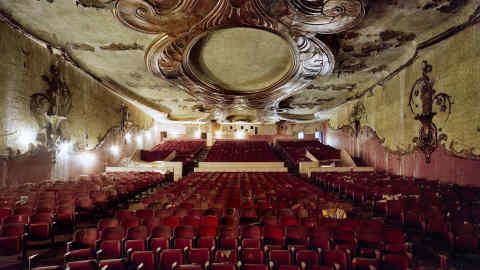 The entertainment industry — and other industries including consumer products — has noted Legendary’s ability to improve on predicted box office and Mr Marolda’s team is now selling some of its services externally.

Eli Roth, a director and producer of horror films, told the Variety Big Data Summit that, rather than shaping ideas, “you use data to find your audience”. He described shooting short films and posting them on Facebook to test how people would react. The films that went viral might be developed further. He also uses Facebook’s analytics to help identify what sort of people a film would appeal to, and spends money to reach more of them.

The data showed him how quickly his audience changes. “What you know is fresh for 90 days. The data are constantly refreshing because people’s interests change so fast.”

The US entertainment industry was slow to gather data on who likes its shows, preferring to rely on the gut instinct of executives and viewer surveys at pre-release screenings.

“When it comes to media, film and television the biggest change started a few years ago, when the [cable] set-top box data came in,” says Bill Franks, chief analytics officer at Teradata, a US-based analytics company. “You could tell that this advert or show was watched by this many subscribers.” He cites finding an overlap in viewers for Friday night fights on sports channel ESPN and those for a show on the History Channel featuring people wrestling alligators. To advertise on the latter was far cheaper.

Such data are closely guarded by the US cable companies, and studios making shows and films have had to rely on other, patchier sources of data from websites or apps they set up, or from mining social media channels and the web.

With the arrival of internet streaming, companies such as Netflix, Hulu and Amazon Prime now have a huge quantity of data to draw on. “If I was a Hollywood studio, I would want to have deals with Netflix or Amazon Prime [to see their data],” says Mr Franks.

Some Hollywood executives are still reluctant to rely heavily on data. But the availability of internet data, and the desire of investors for a firm analysis of a possible audience, is slowly changing the way films are made.

Mr Franks cites shows that invite viewers to engage on how they should progress, such as the “Story Sync” feature on AMC’s The Walking Dead, which polls viewers as the show airs. “It may be a tiny fraction of viewers but they are the really committed ones,” he says.