We use cookies (opens in new window) for a number of reasons, such as keeping FT Sites reliable and secure, personalising content and ads, providing social media features and to analyse how our Sites are used.
Manage cookies
Accept & continue
Global Insight Donald Trump

US lessons from Britain’s Brexit blunder

It would be hard to think of a more dystopian moment than Donald Trump crowing about Brexit in Scotland the day after the fateful UK referendum. The fact that the birthplace of Mr Trump’s mother — and host to a clutch of his golf courses — had rejected Brexit appeared to be lost on the Manhattan tycoon. The fact that he also revelled in the profitmaking opportunities presented by a nosediving sterling were also beside the point. Convention be damned. We are all background furniture in a Trumpian absurdist novel. It was Mr Trump’s moment to exploit.

In the non-fictional world, Brexit’s impact on the US will be felt at many levels. The most immediate, via turmoil in the financial markets, is the easiest to predict. In the short term it may also be the least troubling. At times of uncertainty, investors flee to safe assets and the US Treasury bond market remains their first choice. There will be no need for the US Federal Reserve to reverse its sole interest rate increase from last December. The markets have already done that. US long-bond yields will keep going down. The dollar will strengthen. But longer-term investor uncertainty will only deepen.

The damage to America’s global economic leadership will take longer to unfold. After Brexit, America’s hopes of concluding a transatlantic deal look extremely bleak. The EU has just lost its most outward-looking, pro-trade partner. Prospects for concluding the already stalled Transatlantic Trade and Investment Partnership thus look moribund. The knock-on effect on America’s big Pacific deal — the Transpacific Partnership, which has stalled on Capitol Hill — are harder to calculate. But they are unlikely to be good. Before Thursday, the best-case scenario was for Congress to pass TPP in the lame duck session after the general election. That looks optimistic. Failing that, it is hard to imagine a President Hillary Clinton spending political capital on achieving TPP in her first year in office.

Even with the best outcome, America’s global trade agenda is hanging in the balance. But what if America’s next president is Mr Trump? Before Brexit, US political commentators were cheerfully forecasting his landslide defeat to Mrs Clinton in November. By any conventional measure, Mr Trump ought to be hurtling to electoral disaster. Then again, much the same was said about Britain’s pro-Leave campaign. Like Mr Trump, their message was chaotic, economically risky, and flirted with the dark, xenophobic sentiments that we fondly believed were no longer acceptable in mainstream society. Like Mrs Clinton, Britain’s Remain campaign was banking upon the votes of the young, the non-white, urban and the economically level-headed to carry the day. Such assumptions were badly misplaced. If it could happen in the UK, it could happen in America. Who is to predict? 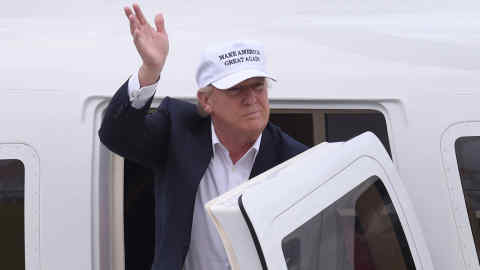 My colleague, Lawrence Summers, now refers to “political science” as an oxymoron. Polls are an increasingly useless predictor of what will happen on the day. So, too, are the betting markets. If there is a silver lining to Brexit for anti-Trump Americans, it offers a dress rehearsal for which strategies to pursue in the coming weeks. Mrs Clinton needs to find a much better way of making a positive case for her presidency. It was always too easy to believe Project Fear was all that was necessary to defeat Mr Trump. Britain’s example should give pause. Voters are not in the mood to embrace the status quo.

And who can blame them? To expand on Mr Summers, all kinds of expertise, including the economics profession, are now held in popular contempt. Some of it is deserved. Brexit’s lesson for the US — and other democracies — is that fear mongering is not enough. Western elites must build a positive case for reforming a system that is no longer perceived to be fair. The British may well repent at leisure for a vote they took in haste. Others can learn from its blunder.