He is surprisingly frank about previous mistakes

The announcement earlier this year that Stephen Urquhart was to retire as president and chief executive of Omega after 17 years created a vacancy for one of the most important positions in the Swiss watch industry.

Mr Urquhart had brought Omega back from the doldrums of the late 1980s to become what many regard as the jewel in the crown of Swatch Group. He cemented the brand’s role as James Bond’s watch supplier, reinstated its sponsorship of the Olympic Games and recruited Hollywood stars such as George Clooney and Nicole Kidman as ambassadors.

Now Omega is the closest rival to Rolex in the market of £4,000-£10,000 watches, selling around 600,000 timepieces per year against an estimated 800,000 for the latter. (Rolex does not release production figures.) And almost six months since he took over, 46-year-old Raynald Aeschlimann intends to achieve an elusive goal.

Overtaking Rolex “would give me the greatest pride”, says the Swiss Mr Aeschlimann, who joined Omega in 1996 and became vice-president and international sales director in 2001, having run the brand’s operations in Spain and the US. “But while we would very much like to be number one, what we need to do first and foremost is to work towards giving customers more confidence. And those customers are the people of Generation Y, the ones in the 20-40 age group.” Mr Aeschlimann’s opportunity — much like everyone else’s — is millennials.

“They are the ones who are supporting us because the people in the 40-60 age group remember us from the time when Omega was selling crap,” he says, referring to a period during the 1980s when the brand had all but abandoned its mechanical watchmaking heritage in favour of an extensive range of quartz-powered models. “At one point back then, someone even suggested killing off the Speedmaster and went as far as reducing the range to a single reference.”

Collecting
For sale — the timepiece that was touched by the galaxy 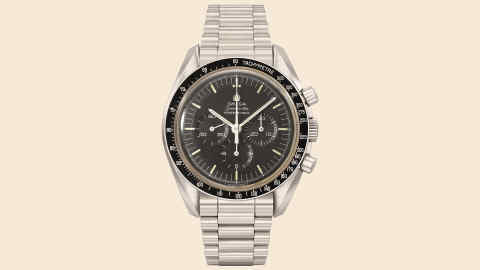 The Speedmaster is now Omega’s “hero model” and the firm has capitalised on its heritage as the “moon watch”, worn by Neil Armstrong when he took his “giant leap for mankind” during the Apollo 11 mission of 1969. It is just such history and proof of technical prowess that Mr Aeschlimann believes will attract those important Generation Y buyers, who like “true stories” and “true values”.

Mr Aeschlimann says Omega has a long history of innovation, ranging from the creation of the Marine diving watch in 1932 to the introduction in 2000 of the first industrially-produced coaxial escapement, which offers enhanced accuracy and reduced servicing. Now, more than 90 per cent of Omega’s mechanical watch movements are of the coaxial design, which was invented by the late English horologist George Daniels.

Surpassing Swiss standards is part of Mr Aeschlimann’s plan. Omega is working with the Swiss government’s agency for measurements (Metas) to enhance the quality and accuracy of its products through a series of rigorous tests beyond the requirements of Cosc (Contrôle Officiel Suisse des Chronomètres, a 40-year-old system). “I don’t think spending £5,000 or more on a watch counts as an everyday purchase to most people, so it gives reassurance to know that what they have bought has achieved Master Chronometry certification and that they can look on our website and check the official test results of their actual watch. We’re aiming to make more than 400,000 Metas-certified watches a year.”

Another set of rules governs what can be called “Swiss Made”, but these are not taxing: “Swiss Made” may only mean that 50 per cent of the movement’s value is from Switzerland. (This will change to 60 per cent of the entire product’s value from 2017.) To keep the label credible, Mr Aeschlimann insists a higher percentage of the watch’s value is actually produced in the country. “I just don’t understand why anyone would not fight for that to be protected. I would say 50 per cent of the credibility of a brand comes from it and, apart from the straps and the ruby bearings, everything that goes into an Omega watch is made here.”

He knows that the label hides all kinds of behaviour. “I think the possibility that the Swiss Made label should ever be misused represents a big danger that could bring trouble for the whole industry,” he says. He adds that a focus on technical improvement and quality has enabled Omega to treble its average price during the past 15 years while cutting the number of outlets globally from 7,000 to 3,000.

Personal & Household Goods
Ahead of the Olympics, how sport and watches became indivisible 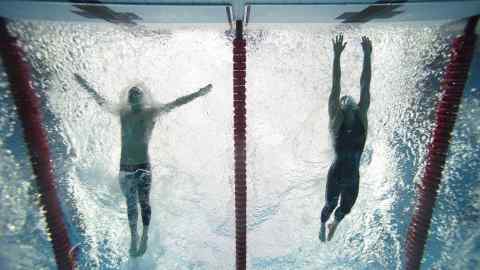 He maintains, however, that it is still vital to spread the history and culture of Omega around the world, something which the brand is doing through ambassador choices and sponsorship. George Clooney is “a bridge across the generations”, while Eddie Redmayne is the millennial star.

“We’re also very conscious of our corporate social responsibility which is why, for example, we are no longer involved in motorsport. Michael Schumacher was an Omega ambassador for a long time, but that was in a different era — Formula One no longer matches our values, it’s too commercial and not sufficiently eco-friendly for us.

“Athletics, swimming, golf and sailing have become our focus, and the fact that Omega is the only watch brand anyone sees during the Olympic Games is incredibly valuable.”

Such events, says Mr Aeschlimann, all help to bring Omega the exposure he believes it needs in order to attract and retain those Generation Y buyers. “Things have moved on from the days when Piccadilly Circus was the ultimate place to advertise. Now, Piccadilly Circus is everyone’s mobile, tablet and laptop.”