Joseph Cotterill in Johannesburg and David Keohane in Paris

We’ll send you a myFT Daily Digest email rounding up the latest TotalEnergies news every morning.

Total has declared force majeure on its multibillion dollar LNG development in Mozambique after an escalation in attacks by Islamist insurgents forced the mothballing of Africa’s biggest private investment.

The French energy major said on Monday it had activated the contractual get-out “considering the evolution of the security situation” in Mozambique’s northernmost Cabo Delgado region, where insurgents last month laid waste to a town adjacent to the $20bn project.

The attack on Palma killed dozens of people, including foreign workers, and made thousands more homeless, prompting Total to withdraw all staff from the nearby project on the Afungi peninsula.

Discoveries of vast offshore gas reserves over the past decade promised to transform the economy of one of the world’s poorest nations.

But the LNG development has been overshadowed by the rise of the insurgent threat since 2017, especially attacks in the past year that have left President Filipe Nyusi’s security forces on the back foot.

Mozambique
‘Some hid in the sea’: Islamist attack on Mozambique town a turning point in Africa’s ignored war 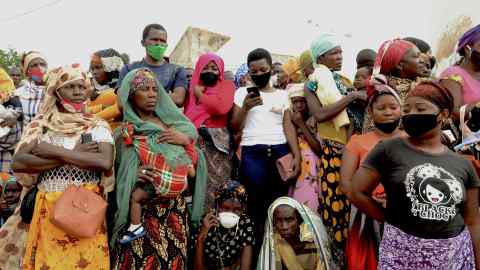 Total’s declaration of force majeure will increase the pressure on the Nyusi government to turn the war round.

“Force majeure has been declared because Total is unable to perform its obligations as a result of the severe deterioration of the security situation in Cabo Delgado, a matter which is entirely out of Total’s control,” the company said.

Total recently signed up to almost $15bn in loans attached to the LNG project before the Palma attack, which took place well within a 25km security cordon it had requested from the government.

The company has not given a date for when it might resume operations, which analysts say is likely to depend on evidence that government forces are being better trained and equipped to fight the insurgents.

Mozambique’s national oil and gas regulator said on Monday that Total would assess the suspension’s impact on the project’s timetable alongside the government.

Total previously signalled that the Mozambique project would produce its first gas in 2024. But even before the Palma attack, exports were unlikely to start before the second half of 2025, analysts at NKC African Economics said.

In the past year, the LNG project, which is targeting production of 12.9m tonnes per year, was also hit by stoppages caused by a coronavirus outbreak and an earlier insurgent threat close to the site.

“While Total’s latest withdrawal may be lengthy, we believe it is unlikely to be permanent,” NKC analysts added. But “the later start date . . . will not only delay the economic benefits stemming from these exports, but will also reduce government revenues” over the project’s lifetime.

Total has a 26.5 per cent stake in the Mozambique LNG project alongside other global investors and ENH, Mozambique’s state oil and gas company.

Get alerts on TotalEnergies when a new story is published