The problem with zero carbon pledges

Ambitions to cut emissions are expressed in almost every company press release and annual report — but some are a lot more real than others.

It was an observation first made in a work of science fiction by the author Frank Herbert 44 years ago. But it is arguably now borne out in works of science fact, by the corporate thought leaders of today. “Ambitions” to combat climate change, by reducing carbon emissions, are expressed in almost every company press release and annual report. On closer reading, though, some appear a lot more real than others.

For the wealth managers charged with ensuring clients’ shareholdings are aligned with their environmental principles, that is a problem.

Investors in HSBC, for example, were recently told of its “net-zero ambition” on carbon emissions. An announcement from the Asia-focused bank said it would reduce “financed emissions from our portfolio of customers” in line with the goals of the Paris Agreement on climate change. It used the word “ambition” or “ambitious” no fewer than five times.

However, climate campaigners said the reality was somewhat less inspiring, as HSBC gave no firm timeline for reducing its financing of coal, oil and gas projects before 2050.

“This is zero ambition, not ‘Net-Zero Ambition’,” retorted activist group Market Forces. Fund Our Future UK, a network of campaign groups, suggested it was “like saying you’ll give up smoking by 2050, but continuing to buy a pack a week, or even smoking more”.

But HSBC shareholders at least have some idea of the goal. Investors in many other banks are offered no such commitment. A survey by PwC this year found just 29 per cent of UK lenders had “a science-based or net-zero climate target”. Jon Williams, a PwC UK partner who focuses on climate change, said while there was “a great willingness” to address this issue, “more needs to be done to turn this into feasible action”.

At oil and gas companies, there is not even much willingness, according to ClientEarth, an environmental charity run by lawyers. In October, it cited a report from the Transition Pathways Initiative, which monitors climate action, showing that none of the world’s biggest oil and gas companies were on track to meet climate goals, despite public commitments to do so. ClientEarth concluded there was “a clear gap between ambition and action”. “Unless these targets are supported by strategies that are reasonable, transparent and include strong accountability mechanisms, there is a significant risk that stakeholders will be misled,” says ClientEarth lawyer Daniel Wiseman.

Yet many stakeholders — in particular, wealthy private shareholders — already want to be led down a greener path. In a survey published in October by Barclays Private Bank, 87 per cent of the world’s wealthiest individuals, families, family offices and foundations said the effects of climate change played a part in their investment choices.

Their portfolio managers therefore need a way of ensuring those choices are right. For Austin Whitman, chief executive of Climate Neutral — a non-profit organisation aiming to bring transparency to carbon “ambitions” — that means asking investee companies three simple questions about cutting their carbon output: “How much, how soon, and how.”

He says the obvious answers to questions one and two are “more” and “sooner” but, where a net-zero ambition is more than five years out, expects a company to commit to “clear annual progress reporting”. Question three is best answered with “a pragmatic combination” of measurable actions, he suggests.

Simon Hallett, head of the European endowment and foundation practice at Cambridge Associates, agrees. “A net-zero target for some far-off date — say 2050 — can be meaningless if it doesn’t come with nearer-term milestones — say 2025.” He says interim targets must be set aggressively enough to hold a company’s management to account, “including through executive compensation”.

To protect against greenwashing, look at how much is achievable today . . . hope is not a strategy

Long-term targets based on unproven new technologies should simply be ignored, Hallett suggests. “Many net-zero commitments are either limited in scope or to a goal the company doesn’t yet know how to achieve,” he warns. “To protect clients from greenwashing, we look for transparency into how much is achievable today versus what requires different technologies . . . hope is not a strategy here.”

Many wealth managers now do all the checking themselves. Karina Funk, portfolio manager and chair of sustainable investing at Brown Advisory, wants to see companies define their ambitions using standard frameworks, such as the Science Based Targets Initiative (SBTI), set up by environmental research bodies. Similarly, Amy Clarke, chief impact officer at wealth firm Tribe Impact Capital, expects carbon commitments to be compliant with the Oxford Offsetting Principles — a new and more exacting set of guidelines from the UK university. That way, clients can be sure ambitions are not simply “a gesture to give a positive impression”.

By applying this scrutiny at the stockpicking level, choices become easier. Although more than 1,000 companies have ambitions for net-zero emissions by 2050, as part of the UN Race To Zero campaign, the reality is that significant reductions will be driven by a much narrower subset. “Only a small handful are leading the charge towards a net-zero future,” says Charlotte Cook, vice-president at wealth manager Kingswood.

So which companies are realistically ambitious? Microsoft is chosen by Cook for taking steps to make itself and its supply chain carbon-negative by 2030 and then, over the next 20 years, to remove all the carbon it ever emitted since it was founded in 1975. It aims to do so through reforestation, soil carbon sequestration, and carbon capture and storage. Clarke also picks the US tech giant for “building on a net-zero base footprint . . . to become a ‘carbon sink’ . . . they have set themselves apart as a pioneer in the race to zero and beyond”. Funk also names Microsoft, as well as sportswear group Nike, for its SBTI emissions target, and coffee chain Starbucks, for aligning its carbon emission measures with those required to limit the global temperature rise to 1.5C. She describes Starbucks’ ambition as “a meaningful target requiring substantial emission reduction”.

Which companies’ ambitions appear too unreal? Oil majors meet with understandable scepticism. “Shell’s campaign around a net-zero world by 2070 is one example — too vague, too far away in time,” says Whitman. 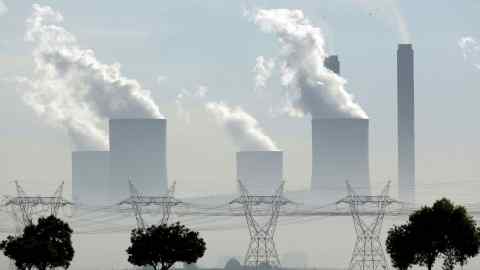 Telecoms group AT&T’s pledges to be neutral on direct and indirect carbon emissions, but not on asset and supply chain assets, are “not enough; too far away in time” in Whitman’s book.

However, it is the ambition of banks and finance houses Clarke finds insufficiently disturbed by reality. “Any company that sets a net-zero target without addressing the elephants in the room about their overall social and environmental impact will, by default, be less meaningful,” she says. “Recently we’ve seen some finance houses declaring net-zero investment emissions intentions with no follow-through on lending policies to fossil-fuel industries or those industries with clear links to deforestation.” Tribe Impact Capital does not single out any banks, but campaigners have recently criticised Barclays as well as HSBC for continuing to finance coal projects. As a result, wealthy investors might achieve more by aiding the largest emitters, rather than heeding the loudest committers. That is certainly the conclusion reached by the multifamily office Stonehage Fleming. Its head of equity management, Gerrit Smit, has welcomed the net-zero commitments made by multinationals L’Oréal, Adidas and Givaudan.

But he makes this telling observation: “Nestlé currently alone generates over 20 times the total of these companies’ combined emissions. We cannot expect Nestlé to have an imminent zero target, but the company has committed itself to cut emissions by a third by the time the other three companies expect to be at a net-zero level. Nestlé’s savings alone will still exceed all of these companies’ total savings by more than six times.”

Smit makes a similar point about industrial gases group Air Products, which has committed to cut its carbon emissions by a third by 2030. “The ‘most guilty’, when it comes to releasing emissions, can make the best contribution to reducing emissions,” he says. And certainly the most real.

This story was amended on November 30 to reflect the fact that BP has committed to cutting its oil and gas production.