The EU is eyeing legal options to strong-arm Britain if a Brexit government refuses to invoke the bloc’s formal “exit clause”, in plans that highlight growing fears of an acrimonious and messy divorce should the UK vote to leave the union.

Alarmed by statements by senior Leave campaigners, EU lawyers have examined ways to suspend Britain’s rights within the single market if an unco-operative Brexit government rolled back common EU laws without seeking to formally leave the union.

The dispute turns on the use of Article 50 of the Lisbon treaty, which lays out an exit process and two-year renewable deadline for a country wishing to give up its EU membership. It would be invoked by the British government and is not automatically triggered by a Leave vote in next week’s referendum.

Senior Leave campaigners have said Britain would delay triggering the clause and instead seek informal talks on new trade arrangements, without giving other EU countries the power to cut off talks. In the meantime, Chris Grayling, a senior minister campaigning for Brexit, said Britain would legislate to immediately curb the role of EU judges and potentially restrict some free movement rights.

This has worried senior officials in Berlin, Paris and Rome, who see it as a tactical ploy that would increase uncertainty and provoke a hostile response from the remaining 27 EU member states.

“This is not on the cards. If they want to leave it is Article 50. There is no third way,” said one senior EU diplomat involved in contingency planning. “Yes or No, there is nothing in between. People will be surprised by how quickly we move to Article 50.”

A series of opinion polls showing momentum with Brexit campaigners has left Brussels in a grim mood. Donald Tusk, the European Council president, on Thursday reiterated that a Britain outside the EU would be “distinctly weaker” as he appealed to voters not to leave a club where Britain’s ideas are gaining traction.

“Instead of seven years of political limbo and uncertainty in our relations, which will be the inevitable and direct result of Brexit, we can have a fast and lasting less than one year implementation of the new settlement for the UK in the EU,” he said, referring to a February deal between the EU and Britain.

Video: A visual explainer to the EU

Speaking in St Petersburg, Jean-Claude Juncker, European Commission president, encouraged voters “not to do it”, saying it would open “a period of major uncertainty”.

The vital question of how long a divorce would take depends on when and how Article 50 is invoked, and whether that break is simultaneously negotiated and concluded with a separate trade deal framing future EU-UK relations.

While diplomats understand any need for a change of government or prime minister may cause some delays, Germany and France are in agreement that formal detailed talks with a Brexit government should begin as soon as possible, and only under the umbrella of Article 50.

“What would be refused is a political decision to leave without formal notification,” said one senior aide to the leader of a big eurozone state. “It would create huge uncertainty. It is tactics and it would not be accepted. We would say we will not start any negotiation of any kind without a notification.” 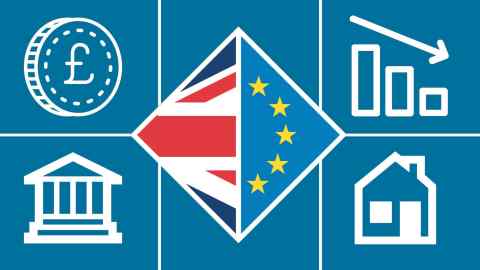 If Britain revokes core elements of EU law before leaving the union, EU officials are aware that their options are limited. Suing Britain at the European Court of Justice or even pressing to revoke its voting rights would be pointless.

If necessary, one option is to take the British prime minister David Cameron’s report on the referendum result, made to the summit of EU leaders, or any later Brexit bill passed in the House of Commons as the formal “notification” required to start the Article 50 procedure.

As an alternative, lawyers are looking at procedures to suspend application of Britain’s rights within the single market, a move that would dramatically increase uncertainty for UK companies exporting to or operating on the continent. “That is a last resort,” said another senior EU diplomat.

This could involve the use of Article 7 of the EU treaty, which is designed to handle rule of law breaches by member states. The option is highly contentious and it is far from clear there would be consensus among member states to use it. “Maybe the ancient legal maxim of ‘two wrongs don’t make a right’ would be relevant,” said one senior eurozone diplomat more sceptical of retaliatory measures.

Mr Cameron has said he would invoke Article 50 “straight away” but his ministers doubt he would survive a Leave vote in the referendum, or have the authority to trigger the divorce.

Michael Gove, justice secretary and a leading Brexit campaigner, has argued “no responsible government” would hastily invoke the Article clause, adding the pace and management of talks must be “in Britain’s hands”. British diplomats have told their counterparts in Europe the potential upheaval in Westminster after a vote to leave could delay Article 50 being triggered for six months.