At her family’s motorcycle service business in a railway arch in east London’s Bethnal Green, Leni Jones has battled challenges from rats and floods to fierce competition from rival businesses.

But she is now taking on a far larger opponent. Her landlord, Network Rail, is planning to sell thousands of arches and many tenants fear the new owner will introduce steep rent rises.

As part of the campaign group Guardians of the Arches, Ms Jones is seeking guarantees for the myriad small companies that thrive in such spaces.

The arches, not originally designed for occupation, have become a popular source of affordable workspace as property prices rise. But tenants — who include long-established industrial businesses along with fashionable start-ups — worry about their companies’ survival once the sale goes through.

Ms Jones’ activism has taken her to the office of Jo Johnson, transport minister, and has prompted nerves among bidders for the arches portfolio as they take on board the political ramifications of any deal.

“I can confidently say we’ve raised awareness at this point,” Ms Jones said. “Now the next push is for transparency and honesty in the process.”

Network Rail, the public-sector body that owns Britain’s rail infrastructure, is selling its commercial estate to raise funds as it struggles with increasing debt. In 2017-18 Network Rail’s net debt grew 10.6 per cent to £51.2bn. The debt moved on to the government’s balance sheet in 2014, restricting the group’s ability to borrow money.

The unique portfolio of 5,500 properties, which includes 150-year leases on 4,455 arches in England and Wales — 94 per cent of which are occupied, has attracted strong interest. It initially drew dozens of inquiries, according to two people briefed on the bidding. That has narrowed to four mostly private equity buyers, with the next round of bids to be submitted this month.

Tenants of the arches, meanwhile, have found their voice. Many became activists in the face of sudden rent rises. Ms Jones said Network Rail in March attempted to increase the rent paid by her business, Rosso Corse, more than threefold to £21,000 when she transferred from a sublease to a direct lease with the rail operator.

Negotiations brought down that figure, but the rent will still almost double. “We are not able to increase our rates [charged to customers] — that would price us out of the market. So it’s going to have to come from the opportunities we can provide our children,” she said.

Network Rail said rent reviews were “part of normal business” and 85 per cent of them result in a rise of 10 per cent or less, while it must ensure good value for taxpayers.

Ms Jones accepted that rent rises were reasonable “in places that have gone through rejuvenation . . . like the arches down by London Bridge — that’s a whole different area now”.

But she insisted that increases in areas such as hers feel “unjust” and can leave arches standing empty in the absence of cash-rich potential tenants, particularly since most are responsible for their own renovations.

The remaining bidders are a pairing of Blackstone, the world’s largest real estate manager, and Telereal Trillium, a company originally set up to acquire properties from the Department for Work and Pensions; CK Asset, the Hong Kong property company founded by the tycoon Li Ka-shing; Guy Hands’ private equity group Terra Firma; and Kildare Partners, founded by Ellis Short, the former owner of Sunderland football club.

They are expected to value the portfolio at up to £1.4bn, although one person familiar with the portfolio says this probably would have been higher if it had not been for the political concerns. A single preferred bidder will then hash out the details of a deal with Network Rail, which expects the sale to conclude by the end of the year.

Another bid, from investment bank Goldman Sachs and the Wellcome Trust health foundation, was withdrawn earlier this summer. The Wellcome Trust said too much due diligence was needed to be able to meet the deadline.

Bidders are considering the potential political fallout, according to people briefed on the process. The Labour party leader, Jeremy Corbyn, has endorsed the guardians’ campaign. A buyer of the portfolio is likely to face local political battles: if it sought planning permission to redevelop properties, for example.

Demands from the 400 tenants in the guardians group include that Mr Johnson pause the sale to enable local authorities and others to bid for parts of the estate. They also want a rent audit to ensure transparency, a commitment to rents below conventional commercial spaces, and a cap on rent increases. 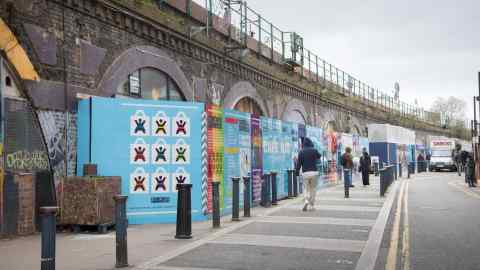 The Department for Transport said it was considering the proposals, but added: “We are committed to the sale because it will enable Network Rail to better focus on running the railway, and proceeds from the sale will be reinvested in the network.”

Chris Hill, who runs wine merchant Latitude from a railway arch in Leeds, said Network Rail has been a hands-off landlord: “You don’t bother them, they don’t bother you, and you can pursue your interests within the archway.” That has enabled him to build his business over 10 years from a one-man band to an employer of four people with a £1m annual turnover.

He joined Guardians of the Arches when he read about the sale process in a newspaper. “I’m blown away by how we’ve managed to make so much noise,” he said. But he is anxious to see that translate into results: “We don’t want to see these pockets of prosperity being closed.”