The EU’s new economy commissioner has warned that the bloc’s budget framework is ill-suited to the low-growth, low-inflation environment pervading the continent as he sought to ignite a debate on reforming the region’s system of fiscal governance.

Paolo Gentiloni noted that EU authorities have power to order countries to rein in their borrowing but no ability to compel them to loosen their public finances.

“It may not be a problem in a normal macroeconomic environment but, as I have said, the conditions that we are living through are not normal,” Mr Gentiloni said in a speech in Frankfurt as he called for a boost to fiscal co-ordination in the region.

The European Commission is due to publish a review of its fiscal framework early in the new year as Mr Gentiloni, who took office at the beginning of December, seeks to re-energise the vexed debate over reform of the region’s deficit rules.

Central banks have been left with little monetary firepower amid tepid growth rates and persistently weak price growth, meaning economists are looking to fiscal policy as a potential lever to battle downturns.

There are some signs of a shifting mood on the topic, even in fiscally conservative Germany. Jens Weidmann, the Bundesbank president and a traditional opponent of loose economic policies, recently warned that the commitment to a balanced federal budget in his country should not be a “fetish” and that nations with strong fiscal positions could increase public investment.

[Completing monetary union] is an overarching priority for the euro area to become the engine of growth, prosperity and stability for the whole union

In his speech Mr Gentiloni argued that fiscal responsibility in high-debt countries should be coupled with more supportive policy in low-debt nations.

He called for a more co-ordinated fiscal policy in the eurozone while insisting this did not mean a more lenient fiscal approach, adding: “We should not forget the original aim of our fiscal rules, namely to ensure the sustainability and safety of public debt.”

As commission officials prepare for a report early in the new year on the region’s so-called six-pack and two-pack budget rules, they are acutely aware of the political risks. Ministers in different parts of the region continue to clash on whether urgent fiscal action is actually needed — let alone on whether a debate on revamping the deficit rules is merited.

Whereas many northern European states favour a strict interpretation of the rules and automatic sanctions, southern governments with higher debt levels have welcomed flexibility and exemptions.

As such, any attempt to reopen the debate over the fiscal framework could quickly become badly bogged down in political gridlock. Already Mr Gentiloni, an Italian social democrat, has triggered recriminations among German politicians by suggesting that the fiscal regime could be updated to allow more scope for governments to fund the fight against climate change. 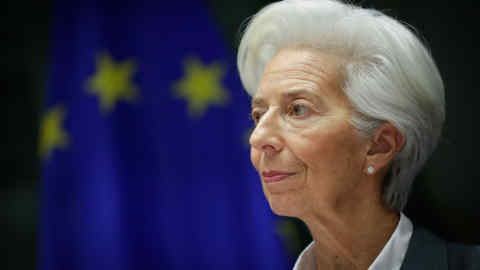 Nevertheless, the commissioner argued that a coherent strategy beyond monetary policy will be needed in Europe to avoid the bloc becoming entrenched as a 1 per cent growth economy. Among the reforms are “a fiscal policy and fiscal governance appropriate to the new environment”, he said.

Politicians would also need to revive their efforts to complete the bloc’s economic and monetary union (EMU), the commissioner said, after a summit of euro-area leaders this month suggested reform efforts were badly bogged down.

A recent attempt by Olaf Scholz, the German finance minister, to propel the region’s banking union project forward by opening the door to common deposit insurance quickly foundered on profound differences between Berlin and Rome over the conditions attached to the reforms.

“We collectively need to cross those red lines that have generated a stalemate in completing the EMU,” said Mr Gentiloni. “We need to take action now to have EMU completed by the end of this mandate.”

He included the creation of a shared safe financial asset — a long-mooted common security for the eurozone — as a way of making the currency union more resilient. Such an instrument would support monetary policy transmission, he argued, as well as helping integrate the region’s capital markets, and reducing the potentially dangerous tendency of banks to load up on their own sovereign debt.

Completing monetary union, he said, “is an overarching priority for the euro area to become the engine of growth, prosperity and stability for the whole union”.