The indoor vegetable patch that keeps your kitchen full of growing, a toothbrush to put a smile on your face – and more

Snap Spectacles 3
First there was Google Glass, which kicked off the age-old futuristic idea of video glasses and gave rise to the term “Glassholes” for the few who used them. Then there were two iterations by Snap, which was the most youth-oriented social-media channel until TikTok. Then there was the exquisite Opkix miniature camera system I reviewed in July, but regard more as for grown-up videographers.

Now Snap has produced Spectacles 3. While I am not exactly their target market, I can well see that a serious young social-media hound would get a lot out of them – as could all kinds of artists. They have an inbuilt camera on each side of your head, so they can produce content in 3D, plus four high-fidelity microphones, and sync it wirelessly to your phone. You can add 3D augmented-reality effects to your films on Snapchat and other platforms.

The software is slightly cumbersome, but that shouldn’t put people off – the beautifully engineered Spectacles 3 look more like a fashion item than a toy, so are arguably cool. £330, smartech.buzz

Akarina 01 kitchen vegetable patch
Akarina is a Japanese variant on the increasingly popular idea of growing fruit and vegetables under LED light. A sub-brand of one of Japan’s most venerable lighting companies, Olympia, the Akarina kitchen vegetable patches are also hydroponic, so use only water and a nutrient-packed fertiliser. There’s an attractive Akarina product for taller plants that hangs on a wall and a very stylish £85 cubist mini-model, the 14. Technically, the tomatoes, salads and so on you will grow in the Akarina gardens aren’t organic, but they’ll certainly be fresh and pesticide-free and you can grow them all year round, meaning reduced carbon footprint and packaging. The 01 and 14 also make rather acceptable room lights while they’re nurturing your supper. £170, akarina.uk

Apple Watch 6
The new, sixth iteration of the Apple Watch has some satisfying upgrades. Its screen is brighter than its predecessor’s and it charges quicker. Apple also claims the new S6 chip improves performance by around 20 per cent. But the headline is a potentially life-saving feature to add to the 5’s ability to take an ECG and warn of irregular heart rhythm. This Apple Watch can also measure your blood oxygen levels. It’s not the first personal device able to do this, but it’s a significant step for Apple.

It can’t yet be said that the watch will help control asthma, or gauge the risk of heart failure, or warn of the onset of respiratory illnesses like Covid-19 – but Apple is working with three medical organisations to trial its possible future efficacy. Meanwhile, tracking O2 levels is another useful metric for assessing improvement in your fitness.

I was curious to know how often the watch checks. Apple says “periodically” when you’re still for a while – I’ve found it is taking an impressive eight to 10 measurements overnight. NB: it’s best to give the watch a 30-minute charge before shut-eye. From £379, apple.com

Oral-B iO Series 9
“This is the most judgmental toothbrush I’ve ever had,” complained a dentally obsessed friend who took up my recommendation to buy this latest Oral-B offering, the iO Series 9. “It made a grumpy face at me for brushing with the wrong pressure.”

Try hard enough and you can pay £500 for the iO9, although it is being discounted to half that, which tells us something about the margins (deliberate dental joke there) on which Oral-B must operate. I had actually recommended my friend the £130 Ion-Sei brush I reviewed in July, and which I still love. But she wanted technology, and while the Ion-Sei has plenty, the iO has more. It has lights, on-handle warning signals and an app: in fact this prodigious machine claims about 250 patents to its name. It is rather magnificent, if arguably more so than a toothbrush need be. Besides the sensors and lights, it has a magnetic-drive system that apparently means the head rotation combines with micro-vibration to give teeth and gums a workout they won’t forget.

The toothbrush website Electric Teeth loves the iO. As does my friend, now she’s used to its hypercritical nature. “The toothbrush actually smiled at me today – made my day!” she reports. £250, oralb.co.uk

Vodafone Curve
I’ve been covering gadgets to track your possessions for 30 years, starting in about 1990 with a key fob that supposedly bleeped when you whistled in a certain way. It was a great piece of technology, apart from the not-working-one-little-bit bit. Today, of course, we have a plethora of trackers, from the ubiquitous and excellent Tile range to the Invoxia Pet Tracker I wrote about in August. All these utilise Bluetooth and other ultra-short-range radio systems strung together in ingenious ways to help you find missing chattels within a city block or so.

HTSI
Techie gifts for everyone – from mini coders to detectorists 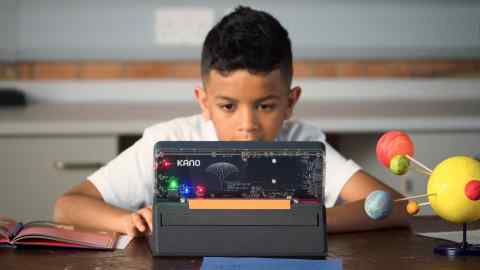 Vodafone, however, has now raised the bar several levels with what I would say is the best tracker ever. The Curve is reasonably small – a 30g, 4.21cm-wide blob – but with a built-in SIM (small subscription required), it employs a blockbuster approach to tracking, using WiFi, mobile telephony and Bluetooth if it can’t get a GPS signal. Which means you can instantly track your missing thing to a metre or so, however far away it is, with very little chance of it going wrong. £20 plus subscription, eshop.v.vodafone.com