Japanese conglomerate Hitachi anticipates a wave of infrastructure spending in China as Beijing tries to turbocharge the economy’s recovery from the coronavirus outbreak.

The group, which makes everything from nuclear power plants to bullet trains, said its elevator factory in China had resumed production and that it expected the construction industry to rebound as cities end their lockdowns.

“These situations create the need for governments to actually get the workforce back and therefore infrastructure spending will rise,” said Alistair Dormer, head of group’s rail and mobility businesses. “All the indications are that China is going ahead at full speed.”

As the first country to be afflicted by the virus, governments, businesses and investors are closely tracking China’s efforts to emerge from lockdown. Last week, Wuhan, the city of 11m people where the disease first erupted, officially ended a more than two-month long quarantine.

Beijing is due to release figures on the economy’s first-quarter performance on Friday, with economists predicting a sharp contraction.

For Hitachi, the pandemic has already forced it to delay the release of its annual earnings to mid-May. Mr Dormer said the group’s sprawling set of businesses had helped cushion the blow from the pandemic. Last week, the company sought to reassure investors that it had a $12.9bn financial buffer including cash at hand, corporate bond issuance and bank loans.

“People say we prefer companies that focus just in one sector. In these kinds of uncertain times, it’s not a bad thing,” said Mr Dormer. “There is impact here and there, but broadly the business is still strong and continuing.”

One of Hitachi’s businesses that has been hit hard is its rail operations in Italy, which make signalling equipment. Hitachi has had a controlling stake in Ansaldo STS since 2015, but has been forced to close its Italian factories as Rome seeks to tame the virus outbreak.

Shares in Hitachi have fallen 32 per cent this year compared with a 17 per cent drop in Japan’s benchmark Topix index.

In the UK, its train assembly plant in north-east England has been on standby since March, although its Newton Aycliffe site in County Durham is expected to resume manufacturing from Tuesday.

Beyond the actual halt to manufacturing, the pandemic has also created new challenges for Hitachi. 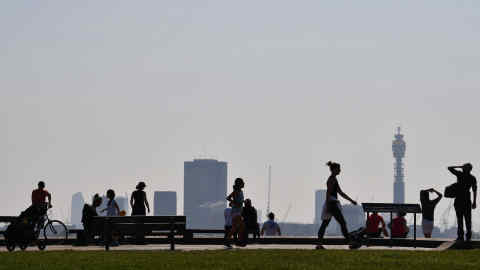 Its UK employees are continuing to maintain the fleet of trains even as one fleet is parked and many of the others are operating at reduced capacity. Wearing face masks and measuring their temperature before starting work, Hitachi’s workers need to ensure that each train is activated every few days so the wheels do not go flat.

“The safety and commitment to our customers is the number one issue on the agenda,” said Mr Dormer. “The rest of the focus is on making sure that when the situation gets better, and it’s safe to do so, that we can restart quickly and rationally.”

Every other aspect of how it conducts its business has changed. Each evening, Mr Dormer holds a crisis meeting with his employees worldwide through a video conference. For senior management meetings held at its head office in Tokyo, the chief executive and its five executive vice presidents sit two metres apart, wearing masks and washing hands before and after the meeting.

“It’s a good leadership challenge for all of our people because you have to be much better at communication,” Mr Dormer said.

Get alerts on Hitachi Ltd when a new story is published