We’ll send you a myFT Daily Digest email rounding up the latest Cardiff news every morning.

Once, Cardiff was at the heart of an economy based on coal and steel. But, in recent years, the Welsh capital has been looking to grow new industries such as digital start-ups to help secure its future.

Amplyfi, for example, is an artificial intelligence start-up that wants to transform the business intelligence industry. Its DataVoyant software platform harvests and reads data that is both publicly available online and from the deep web — the parts of the internet that are not indexed by standard search engines. The technology enables clients to spot potential disruptions to their businesses, whether a war, a market shift, or a new technology.

The company’s co-founders made the decision to base themselves in Cardiff in 2015, having considered London, San Francisco, Boston, Beijing and Cambridge as potential headquarters. Chris Ganje, Amplyfi’s American chief executive, says Cardiff beat rival locations because of its low costs, a ready supply of graduates from local universities as well as funding and incentives from the Welsh government. Relatively easy access to London, and to international airports, was another factor.

Cardiff’s tech start-up scene, which includes many locally founded companies, is already strong in life sciences and software technology. It is building a profile in cyber security and compound semiconductors. The city’s creative industries are also growing.

Cardiff and Swansea have nearly 17,500 digital jobs between them, according to Tech City UK, the government-backed body that promotes technology companies. That places the Cardiff/Swansea area 16th out of 30 zones in the UK for technology jobs, just behind Nottingham and ahead of Bournemouth and Brighton.

But David Warrender, chief executive of Innovation Point, a Welsh government agency set up to encourage the sector’s development, says those figures are underestimates. “We think we have got about 40,000 digital economy jobs in the South Wales region,” he says.

“I grew up in Wales, went away to university, looked around for things to do in Wales and couldn’t find what I wanted, so I moved away for many years,” Mr Warrender says. “When I compare that with the opportunities in the Cardiff region for having a career in digital and technology now, [there is] a world of difference.”

There has been, as yet, no Cardiff unicorn — a start-up valued at more than $1bn — but several companies have ambitions to grow quickly. Mr Ganje expects Amplyfi’s Cardiff workforce to increase from 14 to 40 over the next two years and its turnover to reach £50m within five years.

DevOpsGuys is an IT consultancy that helps online businesses manage their applications in the cloud. Founded in 2013, the company now has 40 staff and employs another 40 associates. James Smith, chief executive and co-founder, says his target is to employ 500 people with a £100m turnover within five years — up from £5m now.

Mr Smith, who is originally from Llanelli in south-west Wales, was living in England when the business started but he was keen to bring it home as soon as he could. “Wales needs success stories of people who have put a business together and grown it, so others can understand how it was done,” he says.

“My view is that, here in Cardiff, we need to figure out how to build a unicorn.” That ambition, he says, will be a more realistic prospect for a consumer-facing business than a business-to-business venture. “I won’t claim we will be there, but we have got that mindset and that capability,” he says.

Cardiff is working hard on promoting tech skills to support the nascent industry. A National Software Academy has opened at Cardiff university and discussions are under way about the creation of a data science academy.

A National Cybersecurity Academy is also being piloted at the University of South Wales, which has campuses at Cardiff, Newport and Pontypridd.

Several co-working spaces and incubators have opened in the city, including Tramshed Tech, Indycube, Entrepreneurial Spark’s Cardiff Hatchery and Cardiff Medicentre, as well as the Welsh Innovation Centre for Enterprise in nearby Caerphilly. Cardiff Start, a network of start-ups and entrepreneurs, has 2,500 members.

To date, Cardiff’s biggest weakness has been a lack of experienced technology entrepreneurs and investors, but there are now some locally based business angels and small venture capital companies. Loans and equity finance are also available from Finance Wales, the government’s venture capital arm.

Cardiff needs to make itself better known to venture capitalists in London and beyond. To this end, Innovation Point is promoting an annual “digital dozen” of promising start-ups.

Stephen Milburn, a co-founder of Cardiff Start who runs an app development agency called Tradebox Media, says he is positive about the future but would like the Welsh government to create a centralised platform for making open data available — an area in which, he says, it is lagging.

Cardiff-based Nudjed, a start-up specialising in health data, is working with the National Health Service using technology to boost preventive care. For example, it is working for a weight management service to find out why some patients — often those with low literacy, anxiety or depression — miss their appointments or drop out of its programmes.

Warren Fauvel, Nudjed chief executive and co-founder, is talking to the NHS about other ways to apply the technology, he says. “Within five years I would be hoping for us to be an internationally traded business in the tens if not hundreds of millions [of pounds in turnover],” he says.

“We have got a large public sector and we need it to support the growth of new digital or intellectual-property-driven business. We have a real generational opportunity to replace the industrial economy that we are emerging from.” 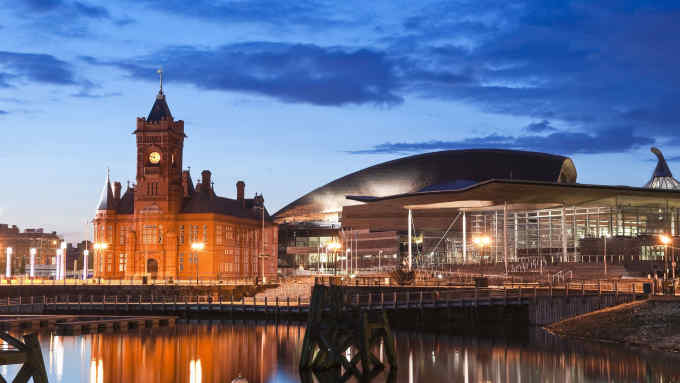