Advocates say it is a way to assess investment risks, rather than to set limitations

The #MeToo movement has spread through many sectors like a tsunami — from the media, to education, to politics. It has also brought about changes in finance, not least in the increased demand for investment products focused on promoting gender equality.

“It’s been a big factor, but not the only one,” says Jackie VanderBrug, head of impact investment strategy in Bank of America’s wealth management division and an adherent of so-called gender-lens investing — an approach that seeks to realise a financial return while promoting gender equality in a measurable way. “It’s brought conversations to the fore that historically were not talked about — like questions around who gets funding.”

Advocates see gender-lens investing as an opportunity worth up to $28tn if women are treated equally to men in the labour market — or a 26 per cent boost to the world’s output by 2025.

Ms VanderBrug, who leads impact investing at Bank of America Merrill Lynch, says the UN’s Sustainable Development Goals have also helped galvanise interest in gender-lens investing, as has the increase in data on positive financial outcomes of maternal health programmes and education initiatives.

In the summer, assets committed to gender-lens strategies in private funds hit a value of $2.2bn worldwide, according to a study by Wharton business school of Philadelphia and Catalyst at Large, a consultancy. While a drop in the ocean compared to more established approaches, it was a 73 per cent increase from last year.

Assets in mutual and exchange traded funds with a gender focus also rose by 85 per cent in the last year to $2.4bn, according to a separate study by the US manager, Veris Wealth Partners. The number of funds in this category climbed from eight in 2014 to 35 today, with high-profile launches from the likes of Legal & General Investment Management grabbing headlines.

In the same period, the number of private equity, venture capital and private debt funds focused on promoting gender diversity rose from 58 to 87. While many focused on technology, healthcare and the environment, there were more esoteric funds such as a film financing vehicle and a purchase order finance fund.

A handful of gender-focused investment initiatives have been driven by institutions. The G7 2X Challenge, for example, is a commitment by development banks within the world’s biggest economies to invest $3bn in projects aimed at women by 2020, while the Billion Dollar Fund, a consortium of finance groups, is halfway to reaching its $1bn capital-raising target.

Ms VanderBrug, however, points out that while the amount of money invested in products with a specific gender-lens mandate may be relatively small so far, gender-lens investing is a much broader category. “There is this misconception that it is just about microfinance loans for women in developing countries,” she says. “But this is not small, soft and not only for women. It really is a tool for all investors, no matter what their asset class, no matter what their geography.”

She set out her theories in a 2016 book called Gender Lens Investing: Uncovering Opportunities for Growth, Returns and Impact with her colleague Joseph Quinlan, and helped bring the topic to a wider audience with media appearances and a Ted Talk.

In Ms VanderBrug’s view, gender-lens investing is just another way of assessing investment risks and opportunities, in much the same way as analysts and portfolio managers increasingly apply an environmental filter when weighing up the fallout from climate change. She says it is not so much about setting limitations on investing, as providing additional information to improve decision making.

Unlike other forms of ethical finance, impact investing requires managers to provide clear and measurable outcomes — producing both societal and financial returns. Gender lens advocates, like Helena Morrissey and Sacha Sadan from Legal & General Investment Management, argue this is not a problem for the strategies as there is a clear link between companies with diverse workforces and strong financial returns.

They point to several studies that reach this conclusion, including research by the Peterson Institute, a US think-tank, and Ernst & Young that analysed 21,000 public companies in 91 countries. It found that bringing more women into higher management boosted profitability.

But not all gender-lens investing is focused on promoting more women into senior positions. For 20 years, Community Capital Management, an impact investment company with 27 staff spread across offices in Fort Lauderdale, Florida, New York, Boston and Charlotte, has been focusing its attention on underserved communities.

“We have always made investments that have had a positive impact for women and girls — there just was never a name for it,” says David Sand, chief impact investment strategist at CCM.

The company primarily focuses on fixed income and manages $2.5bn on behalf of investors, including pension funds, religious groups and wealthy families.

In one example, CCM created a mortgage vehicle to provide loans to low- and moderate-income women from minority backgrounds on behalf of the Congregation of the Sisters of St Joseph, a Catholic community. In another, it loaned money to an organisation that provided housing to victims of domestic abuse in New York.

Mr Sand says he welcomes the moves made by large financial companies into gender-lens impact investing. “It’s a validation,” he says. “It means maybe we weren’t crazy to think there was a business case here.” 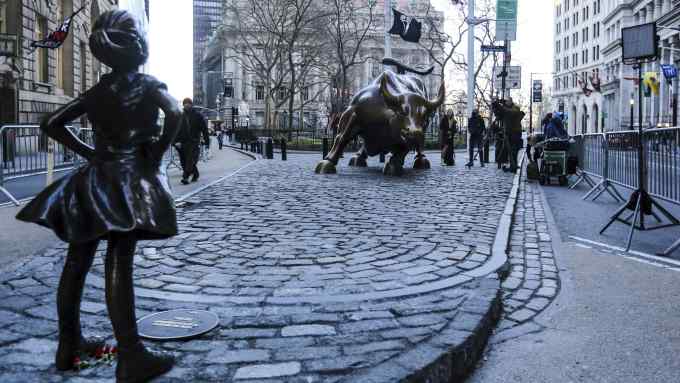