Big Tech braces for a year of regulatory pressure

Lawmakers are taking aim at the big online platforms, but a concerted break-up effort is unlikely

What goes up must come down. And, if the truism holds, then 2022 will be a tipping point for Big Tech.

Their share prices were bolstered by the coronavirus pandemic, which aided all things digital. They have also, so far, been immune to everything from the US-China economic conflict, to increasing global calls for antitrust regulation and limits on surveillance capitalism.

But Facebook whistleblower Frances Haugen’s revelations about how that company — rebranded as Meta Platforms — knowingly used algorithms to target advertising at vulnerable children, and profit from disinformation and hateful content, have become a pivot point in the conversation about regulation.

As venture capitalist and Big Tech critic Roger McNamee puts it: “Frances changed everything. She made people understand that this is all about the culture and the business model [of Big Tech]. Nothing is the product of an accident.”

The result has been that the Federal Trade Commission is once again pushing forward with its antitrust lawsuit against Facebook, and in the US, there is a package of tech-focused antitrust bills that has already moved with bipartisan support out of the House of Representatives’ Judiciary committee.

Overseeing its progress is representative David Cicilline, a Democrat from Rhode Island, who also spearheaded the House report on competition problems in platform technology in 2020. This is just a first step — the bills have to clear both the House and the Senate.

Still, there is growing bipartisan traction around some of the proposed measures, like the American Innovation and Choice Act, introduced by Senators Amy Klobuchar (a Democrat from Minnesota) and Chuck Grassley (a Republican from Iowa). It is a companion to a similar bill introduced in the House by Cicilline.

The legislation would prohibit dominant platforms from discriminating against businesses that rely on their services. This gets to the heart of the way in which many big technology platforms — like Amazon, for example — create marketplaces, but also sell and preference their own products within them in ways that would be illegal in other industries, such as financial services.

In addition, there is an increased effort to protect the rights of children online. The Facebook documents leaked by Haugen contained damning revelations about how the company knew that the content it was pushing teenagers towards could lead to depression, eating disorders, and even self-harm.

This probably means that the Children’s Online Privacy Protection Act, launched by Democratic senator Ed Markey, could pass through both the House and Senate in 2022. The bill aims to limit the ability of platform businesses to collect data from children under 15. It also gives parents and children more legal resources around online harm perpetrated by platforms.

Does this mean that we are likely to see a closing of the infamous CDA 230 loophole that allows platforms off the hook for anything that users say or do online? Probably not.

Many on both sides of the political aisle want to reform this much contested section of the 1996 Communications Decency Act. It states that online platforms are not to be construed as publishers of the material that users post on them.

The difficulty is that Democrats and Republicans are concerned about different types of content. While there is pressure for both sides to be tough on tech before November’s midterm elections, the lack of an easy solution to the question of precisely what material should be limited will make getting to “yes” difficult.

That said, it is likely that Joe Biden’s administration will take concerted legal action on antitrust issues in advance of the midterms, at which point the Democrats may well lose control of Congress. This would curtail their ability to pass any meaningful legislation or do much to curb Big Tech for the next few years.

The president now has a full roster of appointees — from FTC head Lina Khan to the Department of Justice’s antitrust head Jonathan Kantor and White House adviser Tim Wu — who want to take a more aggressive tack on competition policy.

Indeed, the President himself announced 72 discrete measures to do just that in an executive order last July, which proclaimed that the era of consumer price as the only metric of competition policy is over.

This was a significant line in the sand. It moved the US towards a broader definition of competition, in which not just prices, but also consumer choice, market access, stakeholder wellbeing and the rights of citizens might be among the issues considered by regulators.

On that note, not only has the FTC refiled an antitrust case against Facebook, it is also prosecuting Google — along with the DoJ, which has cases against both platforms. The FTC is also reported to be investigating Amazon, while the DoJ is said to be scrutinising Apple.

There is a nascent transatlantic effort to find common ground on Big Tech regulation, as well. The EU’s competition commissioner, Margrethe Vestager, spent time last year in Washington talking to the Biden team, including Khan at the FTC.

Meanwhile, American competition activists including Barry Lynn, founder of think-tank the Open Markets Institute, are pushing for the EU to adopt some of the “new Brandeis” legal thinking about digital markets. It eschews price as the key metric for competition, which would bring Europe more into alignment with the US.

Then, in April, the US-EU Trade and Technology Council, which was established last year to help co-ordinate policy between the two regions, will meet in Paris. It will seek to push forward a new transatlantic regulatory framework for digital trade, talk through rules for surveillance capitalism, and co-ordinate new regional supply chains as China ringfences its own technology ecosystem.

While there will not be any one master initiative to “break up” Big Tech in 2022, we are likely to see many new proposals — and perhaps even some firm rules for the digital road ahead. 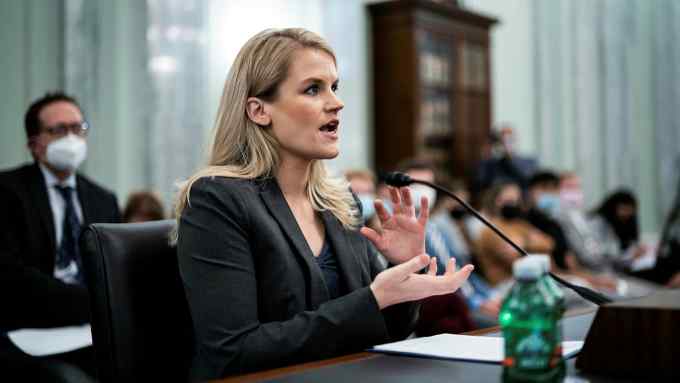