Mary Sibande: ‘If South Africans didn’t get angry, nothing would get done’

In the artist’s first UK solo show, the figure of the domestic worker becomes a political symbol

Two women wearing what might be Victorian dress appear frozen in a dance, or in combat. One wears a maid’s cap, apron and royal-blue dress whose intricate layers resemble feathers. The purple-and mauve costume of the figure facing her has cascading tendrils, while other vermicular shapes made of cloth, with button eyes, float above her head. “The body is painted flat black,” says the South African artist Mary Sibande, who models her life-sized fibreglass figures, including these two, on herself. “I was looking at them as shadows — as these women have been. I wanted the dress to overpower the body, as the black woman was overpowered for years.”

For the 37-year-old Sibande, the work, which is titled “A Reversed Retrogress” (2013), evokes the turbulent transition from the rise of apartheid to its fall. It also marks an artistic development for her. Her “blue period” of sculptures and photographed performances, which began in 2008, explored her avatar Sophie, a domestic worker like her own mother and grandmother, whom the artist ennobled in royal-blue gowns.

Her next phase recalled the Purple Rain protest of 1989 in Cape Town, when police sprayed anti-apartheid demonstrators with purple dye. (Anti-apartheid resistance arose under the much-graffitied slogan “The purple shall govern”.) For Sibande, the exuberant purple woman of her work is the domestic worker’s alter ego.

“A Reversed Retrogress” is the opening work in I Came Apart at the Seams, Sibande’s first UK solo show, at London’s Somerset House, where I meet her. Presented in collaboration with this week’s 1-54 Contemporary African Art Fair at the same venue, the show contains 10 large-scale photographs of her performances as Sophie in various guises, alongside two fibreglass and cloth sculptures. Based in Johannesburg, her works are now in collections ranging from the Zeitz MOCAA in Cape Town to the Smithsonian in Washington.

The opening work in the exhibition was partly inspired by seeing the martial art capoeira in Brazil. “Depending on where you’re standing,” Sibande says, “it looks like combat between the figures, or an embrace, or dance. As the viewer, you animate it.”

A formal innovator, Sibande, like her alter egos, has had to fight her way out of straitjackets. “I was known as an artist who makes Sophie stories about domestic workers in her family,” she says. “So in ‘A Reversed Retrogress’, these purple creatures — vines, tubes, snakes — dismantled that body of work. I wanted to start from scratch and make abstract forms and shapes. Every four years, I have to change colour scheme.”

Sibande was born in 1982 in Barberton, a “tiny town” in South Africa’s Mpumalanga province created by the 1880s gold rush. Her mother, who worked as a domestic help while still at school, moved to Johannesburg to look for work, leaving her pre-school daughter with her parents. Though they visited each other, Sibande didn’t join her mother in Johannesburg until 2001, when she went to university. Yet although so affected by apartheid, “I wasn’t aware of it at all, of a monster lingering,” she says. “People didn’t talk about what was happening, or teach their kids, thinking it would get them into trouble.”

It was only after 1997, when Sibande attended a formerly whites-only school, that she “learned about apartheid — the way we were bullied by teachers . . . No matter how much you studied, you never got good marks.”

Her early ambition was to be a fashion designer before fine art captivated her. Influenced by the silhouettes of the African American artist Kara Walker, “the body became a canvas where I was manipulating the fabric,” she says. She had her first solo show at Gallery MOMO in Johannesburg in 2009, and her avatar Sophie was born with the series “Long Live the Dead Queen” (2008-13). “I thought, these women are tired — they’ve been used for generations. So I started becoming them as Sophie.” “They Don’t Make Them Like They Used To” (2008) is a photograph of the artist as her grandmother making a Superman jersey. “I regard these women as superheroes,” she explains. Their eyes are closed to shut out the viewer, “denying reality and coyly turning inwards”.

Some of Sibande’s female figures in teal combat trousers allude to women soldiers. But they also embody a “father I never knew”; he was recruited to the South African army. “For him, it was a job — one of the few available. He disappeared, and my parents separated. I was three.” She recalls one photograph of him posing with an AK-47. “I thought of him as a toy soldier saving the nation.” Later, she says, “I was so angry at him.”

In works such as the photograph “Living Memory” (2011), the soldier has a female body, she explains, “because what I knew of [my father] as a child was through my mother.” Reunited with her father at 16, her anger was intense. But her feelings changed at university: “I was reading a lot. I understood he didn’t have a choice. All men in South Africa were taken from their families to work as miners or soldiers. I forgave him.”

“The Purple Shall Govern” (2013-17), a series of sculptures and photographs, explores the idea of the body in protest — whether resisting apartheid, or the roles that constrain women. In some performances, she was pregnant with her son, now four. “The innards are pouring out — whether motherhood or emotions,” she says.

Of her latest, red series of photographed performances, “In the Midst of Chaos There Is Also Opportunity” (2017-present), she says, “I’m playing a therapist, looking at emotions, the legacy. What’s apartheid left in our mouths? People are bursting in anger.” For her, the Truth and Reconciliation Commission was a “bogus project that wasn’t about the victim but the victimiser. The victims didn’t get answers. The victimiser lived freely with all his belongings; they didn’t lose anything.” Anger, she says, was “compressed in a bottle, and is now being released drop by drop.”

In the richly symbolic photograph “There’s a storm in my heart” (2019), she performs a sangoma or priestess feeding crimson dogs pieces of her heart. Scarlet vultures — who, for Sibande, represent those who “clean up” — hover over a dying, perhaps sacrificial, white lamb. Storm clouds in a stained-glass window promise the release of rain and harvest. Do such works hint at a healing role for art? “I don’t look at art as therapy,” she responds, “because it’s preaching to the converted. The guy who got the worst end of the stick won’t feel welcome in an art gallery.”

Yet her work does suggest anger’s potential to be harnessed as a creative force. “If South Africans didn’t get angry nothing would get done.” 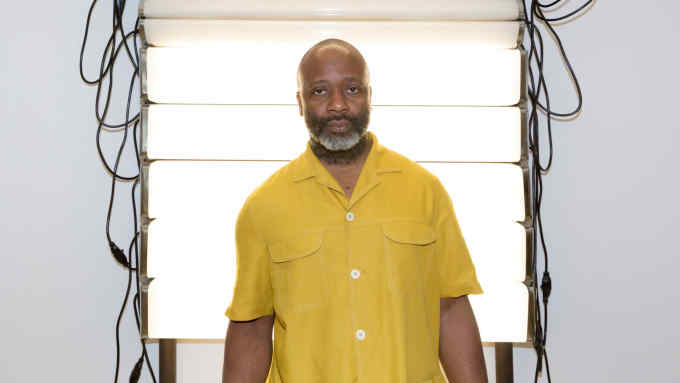