France pushes back on EU plan for talks on car tariffs

France’s economy minister has pushed back against European Commission plans for international talks on car tariffs aimed at easing trade tensions with Donald Trump, saying that the idea “could do more harm than good.”

Speaking to the Financial Times, Bruno Le Maire said that the commission’s idea of talks on tariff reduction among all the world’s major car exporters required in-depth study to assess the potential knock-on effects it could have on European car workers and their suppliers.

“We fear that the effects of a plurilateral negotiation, of a plurilateral agreement could be negative for the European automobile industry and for jobs,” he said. “We are extremely cautious about this proposal which, in our view, at this point in time, could do more harm than good.”

The comments are a blow to the commission, which has informally floated the idea with a number of EU capitals as it looks for ways to avoid an all-out trade war with the US that could be devastating for the transatlantic market.

Mr Trump has already applied punitive tariffs to European steel and aluminium, and has repeatedly threatened the bloc’s car sector, saying it enjoys overly generous access to the US market that is not reciprocated by the EU. The moves are part of a broader protectionist push by his administration, which is also engaged in an escalating trade war with China.

Jean-Claude Juncker, the EU commission’s president, is preparing to visit Washington this month to assess what scope exists for co-operation and dialogue with the US on trade issues. 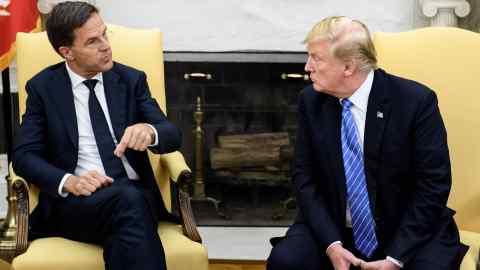 In addition to questioning the benefits of the plurilateral plan, Mr Le Maire also stressed that the EU must stick to its position that there can be no talks on market opening with the US until Washington drops its aggressive trade policy, including the punitive metals tariffs.

“We refuse all negotiation and discussion while we are under the threat of the increased US tariffs,” he said, adding that this principle was clearly set out by EU leaders at a summit in May. “France refuses that the European Union negotiates with a gun against its head”, he added.

Mr Le Maire said that Paris would study “the different options” for moving forward with Germany and its economy minister Peter Altmaier.

“We are going to do an evaluation of the precise consequences of this proposal,” he said.

The commission estimated that some $58bn of EU exports could be affected if Mr Trump went ahead with extra tariffs on cars.

But Paris and a number of other national capitals are concerned both about the potential knock-on effects of any plurilateral deal on a highly sensitive European industry, and on the signal of weakness that could be sent by appearing to be too willing to make offers to Mr Trump.

National diplomats pointed to the fact that negotiations on cars were among the toughest in the years of talks it took the EU to broker trade deals with South Korea and Japan, in part because of the complexity of a sector that ranges from manufacturers to suppliers and dealers.