Programme will provide balance of payments support for cash-strapped economy

James Politi in Washington and David Pilling in Abu Dhabi

The IMF is poised to approve a loan of almost $3bn for Ethiopia as part of a programme to provide balance of payments support for the cash-strapped economy as well as technical assistance for the government’s liberalisation agenda.

The loan, which still needs IMF board approval, has been agreed by staff after the fund opened a representative office in Addis Ababa this year, according to Ethiopia’s state minister of finance, Eyob Tolina.

The east African country of 105m people has enjoyed more than a decade of high growth but recently ran into capacity constraints and chronic shortages of foreign exchange, a byproduct of its tightly state-controlled economy.

Abiy Ahmed, the prime minister, took office in 2018, promising to overhaul the economy. He has spoken frequently about the limits of Ethiopia’s Asian-style state-led development model, which has produced 15 years of near double-digit growth, and he has pledged to nudge Ethiopia towards a more open, market-oriented system.

In September, Mr Abiy, who received the Nobel Peace Prize on Tuesday, announced a “homegrown economic reform” agenda, which he said would include opening various sectors to foreign investment for the first time. Two new telecoms licences are due to be auctioned next year.

Mr Tolina described the anticipated IMF programme as “a huge stamp of approval” for Mr Abiy’s agenda. “It’s excellent news,” he said. “They want to support our policy reform.”

The funds, which will be released in tranches, would be used to counter a looming balance of payments crisis and to fund specific reform initiatives, he said. He added that the IMF would also provide technical assistance on macroeconomic policy, but did not specify in which areas.

The IMF confirmed the agreement after the Financial Times published details of the loan. The fund added that the three-year $2.9bn finance package had been approved by staff following an IMF visit to Ethiopia in November. The programme would also strengthen the oversight of state-owned enterprises and support the reform of Ethiopia’s financial sector, it said in a statement.

Kristalina Georgieva, the managing director of the IMF who replaced Christine Lagarde earlier this year, said Ethiopia’s “homegrown economic reform programme is historic” and the deal would help the country “achieve its enormous economic potential and lay the foundation of a strong and inclusive growth”.

Analysts said Ethiopia would be keen to present the IMF programme as its own and not something imposed by the Washington-based institution.

Charles Robertson, chief economist at Renaissance Capital, said: “The reality is they are running out of money. Their shortage of foreign exchange is acute and has been for years and their requirement for external capital has risen greatly.”

Describing the $3bn as “a substantial chunk of change”, he said he suspected the IMF would put pressure on the government to move to a more flexible exchange rate as part of its lending programme.

Razia Khan, chief Africa economist at Standard Chartered bank, said: “Finalising an IMF programme might be seen as a clear pointer that Ethiopia is that much more serious about rolling out these reforms.”

The government had already indicated it had an appetite for foreign exchange liberalisation over the medium term, she said. 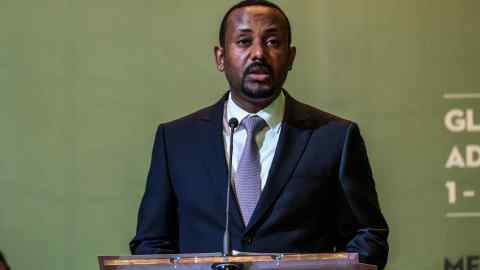 Ethiopia has for years relied on borrowing from domestic banks to fund its investment programme. Foreign banks are not allowed to invest in the country.

The policy has enabled Ethiopia to finance one of Africa’s most ambitious infrastructure builds, including the $4bn Grand Ethiopian Renaissance Dam, but it has also contributed to foreign exchange shortages as the government allocates scarce reserves to strategic investors.

The new injection of foreign currency would help to address that problem and give comfort to new market entrants, said Zemedeneh Negatu, a prominent Ethiopia investor.

“The infusion of an additional several billion into the economy will . . . give local and international investors additional confidence since they will view it as concrete steps being taken by the government to address some of the current macroeconomic headwinds,” he said.

Get alerts on Ethiopia when a new story is published