We’ll send you a myFT Daily Digest email rounding up the latest Pensions news every morning.

Rishi Sunak is preparing to break the Conservative party’s “triple lock” state pension pledge, amid Treasury fears that the policy could soon become unaffordable because of the fallout from the coronavirus crisis.

The UK chancellor’s willingness to break a 2019 Tory manifesto commitment is a sign of how the Covid-19 pandemic is forcing the government to confront political taboos.

Mr Sunak has been warned that unless he breaks the pledge next year, the value of the state pension could rise sharply. The triple lock ensures the state pension goes up by whichever is higher — wages, inflation or 2.5 per cent.

The Treasury has noted with alarm official forecasts that wages could soar in 2021 as they rebound from an artificial dip caused by the government’s job retention scheme. Some 9m people currently receive only 80 per cent of their wages under the furlough scheme.

While April 2021 pension payments would not be hit by this year’s dip in wages — because of the 2.5 per cent minimum annual increase — the Treasury would find itself paying very large increases to pensioners the following year, based on an expected sharp recovery of wages when the furlough scheme ends.

Forecasts of big swings in average earnings have persuaded some inside the Treasury that the triple lock needs to be suspended for at least two years: calculations for setting the rise in state pensions for April 2022 are based on average wage rises in the calendar year to September 2021.

But prime minister Boris Johnson has told Mr Sunak that any new formula for upgrading the state pension should include safeguards for pensioners, according to officials close to the talks.

Number 10 and the Treasury said in a joint statement: “Announcements on tax and pensions policy are for Budgets. The government is committed to supporting pensioners.”

Paul Johnson, director of the Institute for Fiscal Studies, said the government should announce a suspension of the triple lock soon. “Earnings next year compared with 2020 could well go up enormously if lots of people move from 80 per cent pay on furlough to 100 per cent of pay or lots of low-paid jobs disappear”.

Torsten Bell, director of the Resolution Foundation, said it was “inevitable” the Treasury would have to suspend the triple lock scheme and set pension rate increases for the next two years.

The Treasury has long wanted to ditch the policy in the face of an ageing society with a rapid rise in the number of pensioners over the next two decades.

In the Office for Budget Responsibility’s 2018 fiscal sustainability report, the fiscal watchdog said the long-term cost of the triple lock would be 1 per cent of national income a year by 2068, which equates to £20bn a year in today’s prices.

The expected breaking of the triple lock, which was introduced by David Cameron’s coalition government in 2010, would start a big debate about whether it is affordable in the long run. 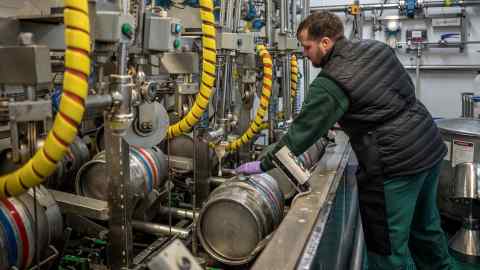 Last month a confidential assessment of the coronavirus crisis by Treasury officials estimated that it would cost the exchequer almost £300bn this year.

Although Mr Sunak is confident Britain can continue to service that debt at low rates of interest, he is also looking for ways to put the country’s public finances on a sounder footing.

Covid-19 has provided the Treasury with a chance to reassess politically popular but highly constrictive policies, including the pensions triple lock and the separate Tory promise not to increase rates of income tax, national insurance and VAT.

Last month Mr Johnson, asked at the Commons liaison committee whether he would continue to honour the pensions triple lock, responded: “We are going to meet all of our manifesto commitments. Unless I specifically tell you otherwise.”

Trust of elderly Britons is at stake over triple-lock / From Lisa Ray, Steve Edwards and Eamonn Donaghy

An equitable solution to the pensions issue / From Keeley-Jasmine Cavendish, London SE21, UK

Get alerts on Pensions when a new story is published