The ESG investor’s dilemma: to engage or divest?

We’ll send you a myFT Daily Digest email rounding up the latest Divestment news every morning.

When more than 600 institutional investors gathered for a Bank of America conference in December to talk about environmental, social and governance (ESG) themes, one topic rarely discussed among Wall Street elites was very much part of the conversation: divestment.

Seen historically as a pressure tactic reserved for students and religious investors, divestment has become an issue that the world’s biggest asset managers can no longer ignore.

BlackRock, the world’s largest asset manager, announced a year ago that it would eliminate from its active investment portfolios any companies that generate a quarter of their revenues from thermal coal production. At about the same time, BNP Paribas asset management said it would exclude companies that derive 10 per cent of their revenues from coal production. The company said it would also exclude high-carbon-emitting power companies.

But divestment comes at a cost. Investors might lose out on juicy returns in legal and profitable — albeit controversial — companies. They also lose their voice as partial owners of a company when they sell their stakes.

Whether investors should divest or engage — or execute a combined strategy — was a key question for the Bank of America gathering and has rippled throughout the financial industry.

“We expect this will be a hotly debated issue in 2021,” says State Street Global Advisers, which has $3.2tn of assets under management, in an ESG outlook report for the new year.

As far back as the late 1970s, investors have been using divestment as a way to achieve social goals. Opponents of apartheid in South Africa used stock holdings to pressure companies to reduce or eliminate their business operations there. Students urged trustees of university endowments to sell stakes in reluctant companies. But a different strategy has gained traction as investors have started to worry about global warming. In 2014, Norway’s $1tn Government Pension Fund Global studied divestment as a way to combat climate change, and decided against automatically exiting coal and oil companies. Climate change risk, it concluded, was best managed by active engagement with these businesses. Similarly, Japan’s $1.36tn Government Pension Investment Fund (GPIF), the world’s largest pension programme, has called on its managers to engage with companies on climate change rather than divest.

But pension funds have taken a range of approaches, including a mix of divestment and engagement. In 2016, Waltham Forest, a London borough, became the first local government in the UK to announce that it would jettison all fossil fuel investments in its pension scheme. In the US, New York state’s pension fund said in December that it would sell energy companies that do not have a plan to cut emissions and transition away from fossil fuels.

Meanwhile a wider array of businesses are finding themselves ensnared in the divestment debate. In the wake of President Donald Trump’s election, human rights campaigners called on Vanguard, BlackRock and Fidelity to divest from CoreCivic and Geo, the largest operators of US private prisons and migrant detention centres. In 2017, New York City’s $239.8bn pension fund became the first among big cities to divest from private prison companies. 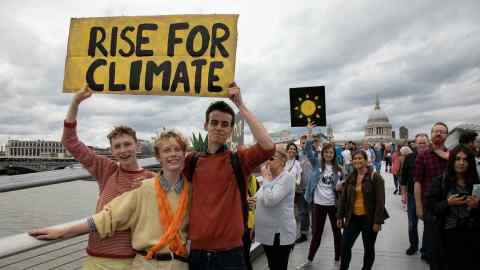 Such moves can have detrimental consequences for the pensioners whom funds are supposed to serve. Calpers, the Californian state pension fund that is the largest in the US, with $444bn in assets, divested from tobacco companies in 2000. A study of Calpers’s divestment decision found the fund forfeited $3bn in missed returns.

As a result of divestment’s drawbacks, asset managers are treading carefully when considering the option. For French asset manager Amundi, it is a last resort, used only when “the risk is too high to ignore,” says Caroline Le Meaux, head of ESG research, engagement and voting policy.

“It is true that we are more on the engagement dynamic, but nevertheless on coal we might be a little more demanding because we feel it is very high risk,” she says.

In a 2020 paper on the debate over engagement versus divestment, a trio of professors at the Universities of Trento, Harvard and Chicago found that exiting is less effective than engagement in pushing companies to act in a socially responsible manner. There is no guarantee that a divestment will achieve a desired social goal, while consistent badgering can.

Well-diversified retail investors can bring about environment benefits at almost no cost to their own portfolios by simply asking for and voting on changes at fossil fuel companies, according to Oliver Hart, the Harvard co-author. “We saw extremely positive results about voice,” he says — by contrast with the “negative results about exit”.

That voice is becoming louder. BlackRock has historically dismissed most shareholder proposals at annual general meetings by voting against them. Quiet engagement was seen as more likely to bring ESG benefits than angering executives with public votes.

But for 2021, BlackRock has said it is changing tack.

READ MOREBusiness and Society
The ESG investor’s dilemma: to engage or divest? 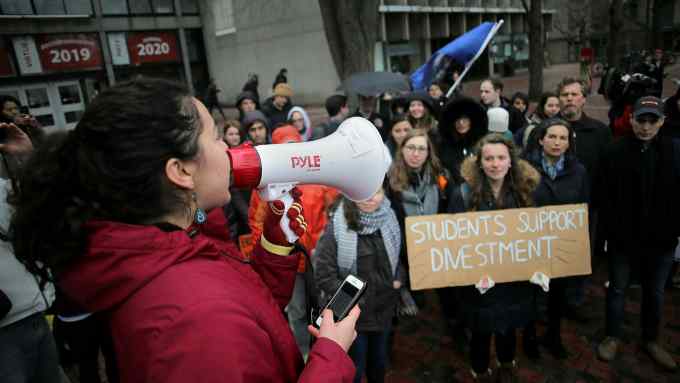