‘The best advice I’ve been given’: Cynthia Nixon, Kengo Kuma, Gilbert & George and co share all

From ‘don’t refuse anything’ to ‘always come from a place of love’, HTSI Aesthetes share words of wisdom
Jump to comments sectionPrint this page

“The best bit of advice I’ve ever received was from a university professor who said: ‘Don’t refuse anything, accept it all.’ He encouraged me to be open to all new things – places, people, foods. We travelled to the Sahara together and it was so eye-opening.”

“Murray Hill, a fellow friend in showbiz, once said to me: ‘If you don’t see yourself represented, represent yourself.’ I always thought it was a powerful thing to impart to others who don’t always feel comfortable walking into a room or starting on a subject that isn’t already being talked about. It may suck, there may be that tokenism, but you’ve got to do it.”

“‘It doesn’t matter what you do, but do it to the nth degree.’ That was from Louise Wilson, who was my tutor at Central Saint Martins when I did my master’s in fashion design. I always felt out of place there because I didn’t come from fashion and I was intimidated by the fashion people around me. She said if you’re going to be a textile designer, do 25 screen prints and push what you know that you can physically do well. She influenced so many people and I feel very lucky to be one of them.”

“My sister once said ‘good clothes open doors’. It doesn’t mean expensive clothes, it’s about pulling yourself together and presenting yourself in a way that makes you feel good. Ultimately, it distils down to something quite powerful.”

“Humility and doubt are creation’s best allies. You must question yourself and imagine all the options. This is how I try to create with my team. Only after trying everything can I say yes. It’s not just about creating something decorative but about adding sense to what you make.”

“My father was analysing one of my designs and he said, ‘Don’t try too hard.’ It’s really influenced me. The best designs come naturally; the worst are when people are over-designing things.”

“The best bit of advice I ever received was when we went public: ‘Take care of the brand – don’t follow the sales and revenues.’”

“A year after [my husband] Sam died, someone said ‘you have to put your cape on first’. I’ve had to learn to look after myself and I think it’s hard – for women especially – to do that without feeling guilty. But there is more pressure on me now, as the single parent. I am carrying my family, and there’s a constant weighing, week by week, of what I need to make time for outside of work and my kids, whether that’s yoga, a nap, having fun with my friends. I’ve also learnt how valuable quiet time is. I can’t do it all.”

“The only way out is in. I’d heard it here and there, but it only really clicked when I started meditating, which David Lynch taught me to do – he sent me to a friend of his about a decade ago.”

“When I first opened my gallery, I was advised by a sage senior art gallery owner to always buy a work from every exhibition. Given the programme, I would now have one of the finest collections in the country. Did I follow this advice? Sadly not.”

“Laurence Olivier was once asked by a young actor what was the most important piece of advice he could share, and he replied: ‘How to become an old actor.’ In other words, why are you in this and what will sustain you? You don’t start to get good for 30 years…”

“The best bit of advice I ever received was from a Parisian exchange student called Gee – a mad artist who didn’t speak much English and who was only in my life for six months. He said: ‘Always take your boots off when entering a jungle; that way when you step on a snake, it won’t bite you.’ Which I think means, be gracious and respectful, don’t go blazing in making a hoo-ha.”

“When I was in high school. I was watching an interview with Warren Buffett on investing and I was expecting a stock pick, but instead he said to ‘invest in yourself’. As a kid, I’d never previously considered this concept, but it’s an important one.”

“When I was making my paintings and not succeeding too well, my mother would say, ‘Try again,’ and remind me of Louis Blériot, who tried many times to cross the Channel in a plane before he did it. So success comes with a lot of passion.”

“Tony Award-winning director Kenny Leon said to ‘always come from a place of love’ – meaning have the best intentions and all will work out right.”

The Aesthete
‘My best discovery of 2022’ by the HTSI Aesthetes 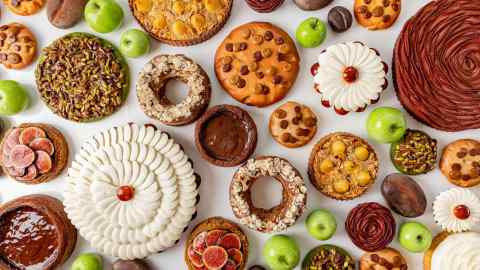 “My parents said to remember where I came from and to be humble. There’s always somebody better off than you and there is always somebody worse off. It is a very middle-class way of looking at who you are and staying grounded.”

“When I was about to start my creative directorship at Boucheron in 2001 I had a moment of doubt about my ability to perform the job. Suzy Menkes told me: ‘They need you more than you need them.’ Those words gave me such confidence.”

Gilbert: “The best bit of advice is our own advice: fuck the teachers.”