If there has been a single big idea over the decades that has underpinned the World Economic Forum, it is the notion of replacing international conflict with inter­national commerce.

For the organisers and most of the delegates at the WEF — which this year notches up its 50th anniversary — globalisation is a positive force, reducing poverty, creating common interests between nations and allowing the spread of technologies that can tackle complex problems like disease and environmental degradation.

The forum’s external critics have long regarded this vision as glib and delusional. They argue that it has provided rhetorical cover for a global system that has increased inequality and prioritised profit over the welfare of the planet.

Amid a backlash against globalisation, rising tensions between great powers and increasing anxiety about the environment, the image of international plutocrats gathering in a Swiss mountain resort for a week of meetings and parties, is more provocative than ever.

The rucksacks handed out to Davos delegates bear the conference slogan “committed to improving the state of the world”. WEF detractors tend to believe that a better slogan would be “committed to protecting the interests of the global elite”.

At a time of increasing populism, a number of world leaders who might once have been expected to embrace the Davos gospel have taken to denouncing it. In the US, advisers to Donald Trump have labelled their ideological enemies “the party of Davos”. The US president himself rails against “globalism”. This year, Boris Johnson, Britain’s prime minister, is making a point of not attending Davos, in favour of working on his domestic agenda.

But the critics of Davos are as capable of hypocrisy as the delegates. They are often one and the same people. Mr Trump loves to attend Davos and is scheduled to appear again this year.

It is not just the demonstrators outside the WEF tent and the populist politicians inside it that are posing severe challenges to the Davos vision. Events out in the real world also seem to be conspiring to undermine the idea that globalisation and capitalism are unstop­pable forces “improving the state of the world”.

This year’s forum takes place against a background of political fires in the Middle East and real fires in Australia. Such circumstances are likely to ensure that geopolitical and environmental concerns overshadow the economic and business questions that dominate WEF’s agenda in calmer times.

The Trump administration’s killing of Qassem Soleimani, Iran’s most feared military commander, has dramatically increased the risk of further conflict in the Middle East — a region already contending with wars in Syria, Yemen and (at a lower level) Libya. The big new danger is of a direct clash between the US and Iran. If that now comes to pass, it will have serious implications for the stability of the whole Gulf region, a crucial source of both energy and capital for the wider global economy.

If the US finds itself drawn into another military conflict in the Middle East, it will run directly counter to Mr Trump’s promise to pull the US out of “endless wars” in the area. It will also undermine his administration’s attempt to refocus US foreign policy on great-power competition and trade. 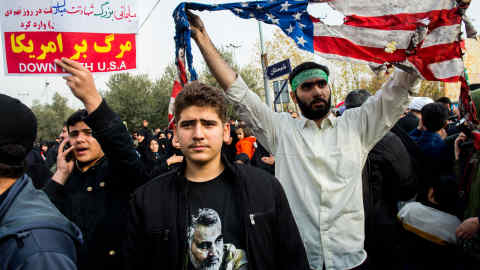 For some months, it has been clear that Mr Trump wants to call an end, or at least a sustainable truce, to his trade war with China. The announcement of a “phase one” trade deal between the US and China has seen tariffs frozen — and the Chinese commit to making large purchases of US goods.

In the crucial field of technology, however, it looks as if the “decoupling” between the Chinese and US economies is set to continue.

Washington’s intent to thwart the global ambitions of Huawei, China’s mobile communications champion — as well as China’s longstanding obstacles to US technology companies like Google and Facebook — is increasingly leading to the creation of two quite separate technology universes. That has big implications for international trade and the vision of a single, interconnected global economy.

The decoupling of the world’s two largest economies also has geopolitical ramifications. While the Davosian perspective that more global commerce means less global conflict was always a little oversimplified, it is quite possible that the opposite would be the case — namely that the severing of US and Chinese economic ties will hasten their slide into strategic rivalry.

French President Emmanuel Macron, whose internationalist agenda tends to go down well at Davos, is preoccupied by domestic labour unrest. Angela Merkel, German chancellor, is coming to the end of her period in power.

There will, however, be considerable interest in the likely appearance of the new head of the European Commission, Ursula von der Leyen. Her promises to create a “geopolitical commission”, and to carve out a distinctive European role in the global argument over technology regulation, will be examined closely.

The rise in international trade tensions and the risk of war in the Middle East will further exasperate environmental activists. They feel that global leaders are simply concentrating on the wrong issues.

But acknowledging the importance of environmental issues and creating positive change are rather different things. When WEF was still preoccupied with the joys of globalisation, Davos was an effective place to make things happen. The forum served as a sort of high-minded dating agency, with business people, financiers and political leaders able to co-operate to facilitate the growth of trade and investment.

It is far less evident that the same types of people can work together to find global solutions to pressing environmental matters.

Corporations, for example, will talk about putting “sustainability” at the heart of their businesses. For their part, financiers will stress the need to incorporate climate considerations into their risk models. At the same time, most politicians (though not Mr Trump) may pay lip-service to the need for international co-operation to combat the dangers.

All three groups will continue to applaud activists like Ms Thunberg. The suspicion could well remain, however, that nothing much of substance will happen.

When it comes to the climate crisis, the old debates about whether Davos is a force for good or ill in the world might not apply. The forum may be neither part of the problem, nor part of the solution. It risks simply being irrelevant. 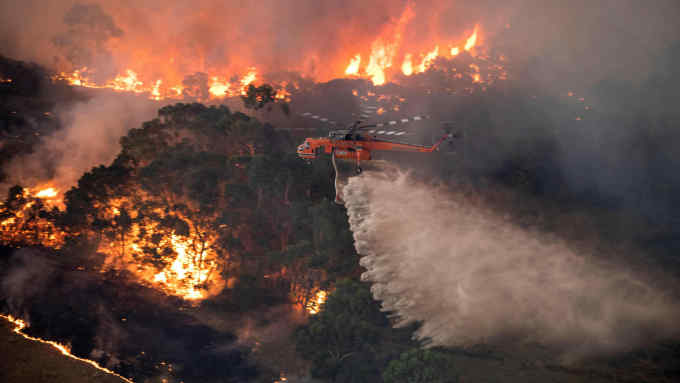