The appliance of agricultural science

Businesses are pushing futuristic schemes to help feed the world

The cows on the Kimotsuki Daichi farm in Kagoshima on the southern tip of Japan look unremarkable, save for their ankles. Attached to the slender limbs, just above the foot, are bright orange devices. As they wander around, these pedometers measure the number of steps taken and feed the rate of activity into a data system, which analyses it every hour.

Unlike human Fitbits, the purpose of this device is not to monitor bovine endurance or agility — instead its aim is to let the farmer know, via mobile phone, when the cow is ready to breed.

The system, developed by Fujitsu, the Japanese IT equipment and services company, is known informally as the Connected Cow project.

Fujitsu says when a cow is on heat — or begins oestrus — it walks on average six times more than usual. The optimal period for insemination only lasts 12-18 hours every 21 days. But two-thirds of the time oestrus begins at night, when the farmer is asleep. Missing this window can result in a low pregnancy rate and another 21-day wait before the next cycle, adding to farmers’ costs.

The system is just one example of how the deployment of technology is boosting farmers’ output and profits.

Karl Verhulst, head of internet-of-things solutions in Fujitsu’s digital technology services business, says: “This is quite groundbreaking because our algorithms are quite precise. It’s accurate and we are also able to influence the gender of the calf.”

So far, 5,000 cows are using the Fujitsu Connected Cow service in Japan, Turkey and Poland. The company has embarked on a “proof of concept” trial with the University of Reading to encourage its uptake in the UK.

The leap from millennia of dairy farmers observing their cows for signs of oestrus to using cloud computing and wearable technology is pronounced and relatively sudden.

Such advances in technology will be needed to drive efficiency and yields in order to meet the growing demand for food over the next decade.

The world’s population is projected to rise from 7.4bn currently to 8.1bn in 2025, according to the UN’s Food and Agriculture Organization. Agriculture already accounts for 40 per cent of the world’s total land area. The FAO says there is some scope to increase land for agriculture in parts of sub-Saharan Africa and Latin America. But it expects demand for food to be met overwhelmingly by productivity gains.

Food & Beverage
How Africa can turn a food deficit to surplus The UN food agency’s latest annual agricultural outlook, produced alongside the OECD, forecast that 80 per cent of the increase in crop output would come from yield improvements.

Such technological advances do not come cheap. But the agricultural sector is suffering from a shortfall in investment. The FAO estimates that $83bn of additional investment is needed to meet the goals for 2050. That is equivalent to an annual rise of 50 per cent from current levels. Farmers are already by far the biggest investors — their capital exceeds that from governments and domestic corporations by a ratio of more than three to one, says the FAO.

Ms Menker became interested in agriculture in her former job as a commodities trader at Morgan Stanley. “Agriculture is a very fragmented industry and information about it has been captured in a fragmented, disorganised way,” she says. “There’s a lot of inefficiencies in markets today that I think can be eliminated once people have a much better understanding of them.”

She quit managing her multibillion-dollar options trading portfolio to establish her venture, which aims to provide that information, with backing from some former colleagues at the bank.

Gro Intelligence has developed a subscription-service software called Clews, which acts as a type of search engine to provide data analytics across a broad range of agricultural data. These include environmental data based on satellite imagery, crop production, trade flows and demographics.

The target audience is not so much the farmer as potential investors, insurers and policymakers.

“It is the ecosystem around the farmer that is not as well-informed as people think,” she says. “If you don’t get policymakers, investors, corporates, the non-profit sector, all to use the same classification system in a common language, you will not solve some of these fundamental problems around food security,” Ms Menker says.

Reducing waste is one aspect of much-needed change, given that up to one-third of food either spoils or is thrown away, according to the FAO.

Another is to eat less meat. Looking to 2025, the FAO says this is when demand will be greatest for meat, fish and dairy products, which in turn will lead to additional demand for animal feed, including coarse grains and protein meals.

Proagrica, the farming informatics business of Relx group (the former Reed Elsevier), says that protein intake has risen by 43 per cent in the daily diet, from an average of 355 calories a day in 1965 to 507 in 2014.

Keeping up that rate of growth will put enormous pressure on natural resources. A aside from the amount of feed and land use involved, livestock produces 14.5 per cent of all greenhouse gas emissions, according to the UN.

This has encouraged investment in plant-based alternatives as a way of reducing demand for animals as food. 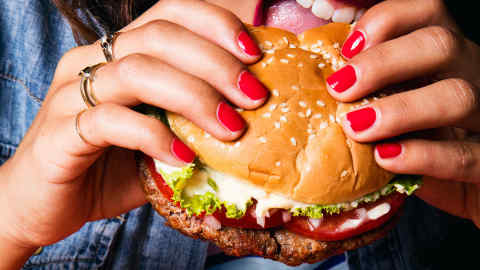 Perhaps the most eye-catching and radical approach is that taken by Soylent, the nutritional meal replacement drink that became a Silicon Valley hit after its 20-something inventor Rob Rhinehart wrote a blog entitled “How I Stopped Eating Food”.

However, widespread embrace of functional food is some way off. More promising, for the time being, are meat alternatives that seek to emulate the look, texture, sizzle and taste of meat. They are aimed not so much at vegetarians, but at keeping carnivores satisfied enough to cut back on meat in their diet.

So far, high-profile names, including Bill Gates, the former Microsoft chief, and Sergey Brin, Google co-founder, have invested in the sector.

But more recently, Tyson Foods, one of the world’s largest meat processors, took a 5 per cent stake in Beyond Meat, a California-based meat substitute company, saying its investment “underscores the growing market for plant protein”.

“Beef” burgers without cows would also be one way of resolving bovine breeding problems.