The highly curious (and sometimes horrifying) appeal of hair art

A new twist on Victorian “hairwork” is making waves

Of all the Victorian pastimes currently making a comeback, creating jewellery from locks of hair seems unlikely to join embroidery and flower-pressing as a 21st-century parlour craft any time soon. But in Philadelphia, jeweller Melanie Bilenker has been painstakingly reinventing this arcane and rather morbid “fancywork”, coming up with a series of intriguing modern accessories currently being shown at the specialist jewellery gallery Sienna Patti Contemporary in Lenox, Massachusetts.

In the 19th century, hair from a beloved would be wrought into intricate floral scenes preserved in glass-fronted brooches and pendants; strands were woven into bracelets and even constructed into sculptural shadow boxes and wreaths to be hung in interiors. Books of the day detailed how to create these highly curious – and sometimes creepy – artworks.

“I read Victorian-era handwork guides for women on traditional hairwork techniques using materials such as gum and goldbeaters’ skin,” says Bilenker, whose inspiration to use hair in work came from a mourning miniature. “I thought about the potential of full strands used as lines. Hair has been used to represent death, dirt, desire. I see it as proof of existence, as a minute in time, a souvenir.” But gone is the florid Victorian sentimentality; instead Bilenker’s pendants and brooches are graphic and sparsely elegant, equally influenced by contemporary art. “Ana Mendieta and Janine Antoni introduced me to the female body as a mark-making tool,” she says. “Artists such as Kiki Smith and Tom Friedman use hair as a material – mortal and domestic.”

I see hair as proof of existence, as a minute in time, a souvenir”

Smith is best known for her drawings of hair but has also incorporated real hair into visceral sculptures of the female form, while Friedman’s Untitled artwork from 1990 is a box-framed bar of soap on which he has created a precise spiral – in his own pubic hair. A play on the revulsion of finding errant hairs, the piece sold for $58,750 at Christie’s in 2001. Human hair also crops up in the multimedia work of Palestinian artist Mona Hatoum – as single strands hanging from a steel bed frame in her 2010 installation Interior/Exterior, and wrought into a delicate string of beads in 1995’s Hair Necklace, displayed on a stately wood and leather bust. And Shanghai-born artist Gu Wenda’s most famous work, United Nations, is a series of flags and banners whose designs are created in human hair collected from countries around the world.

Other artists opt for synthetic hair. Minneapolis-based artist Jessica Wohl’s flight of stairs covered in masses of fake brown tresses is the stuff of horror films, while Icelandic artist Hrafnhildur Arnardóttir – known as Shoplifter – uses colourful hair extensions to joyful effect, including the psychedelic, immersive Chromo Sapiens “hair cave” she constructed at the Pavilion of Iceland for the 2019 Venice Biennale.

For Bilenker’s current exhibition, titled HomeWork, hair is used to depict everyday scenes: women trimming, brushing and braiding their hair, but also cleaning the bath or simply placing a pan on the hob. The images resemble pencil drawings, so one artwork is presented with a viewfinder to see the detail up close. Most are captured in elegant glass-fronted, oval-shaped gold-framed pendants and brooches. “The use of hair inherently gives the work a sense of intimacy,” says gallerist Sienna Patti, who has worked with Bilenker since she won an emerging artist grant sponsored by the gallery in 2003. “The viewer feels as though Melanie has invited us in for a personal moment of solitude, where all the little minutes add up to the hours of the day.”

How To Spend It
Paris, je t’aime: why we’re falling for plaster once more 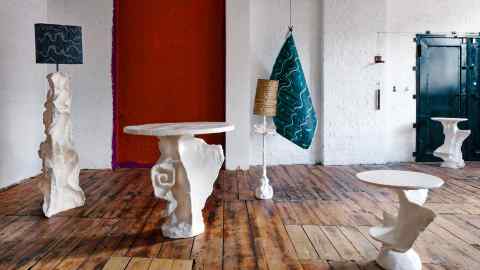 The process is as laborious as the chores Bilenker depicts. “I wash and remove the hair’s oils according to Victorian guides and then carefully cut and glue each snip of a strand in place on paper,” she says. “I choose hairs of varying thickness and colour that I have collected from my combings. It is a slow, meditative process.”

Perhaps this is a craft due a revival after all. At Brooklyn’s Museum of Morbid Anatomy, jeweller Karen Bachmann runs four-week workshops on Victorian hairwork. The next one commences on 2 February – over Zoom, of course.

“HomeWork” is at Sienna Patti Contemporary (siennapatti.com) until 11 February 2021. Works are priced from $1,800 to $30,000, with further limited-edition pieces from $395 available in the Sienna Patti Shop.