US voters more pessimistic on chances of economic rebound

Americans have become more pessimistic about the prospects for a quick pandemic recovery, especially in the states of the US south and west where coronavirus cases have spiked, according to a new poll for the Financial Times.

Almost half of likely voters, about 49 per cent, said they believed the outbreak would get worse in their community over the next month, a sharp increase from the 35 per cent who said the pandemic would worsen when asked a month ago. Only 24 per cent said they believed it would improve.

At the same time, the monthly survey of likely voters for the FT and the Peter G Peterson Foundation found that the share of Americans who believed the US economy would “fully recover” in a year dropped from 42 per cent to 37 per cent. Those saying a recovery would take a year or more rose from 58 per cent to 63 per cent.

The FT-Peterson poll, conducted at the end of June, showed the spike in pessimism was particularly pronounced in the south and west, which have experienced a sharp increase in coronavirus cases after reopening their economies in May.

In the south, 56 per cent of likely voters said coronavirus would get worse in their community in the next month, as did 59 per cent in the west, compared with just 29 per cent in the north-east, which bore the brunt of the early stages of the US outbreak but has largely been spared in the more recent spike.

The north-east was also the only region that showed little change in its economic outlook; the portion of voters in the south who think a recovery will take longer than a year rose 6 percentage points over a month ago while the increase in the west was 8 points.

The results underscore the challenge facing President Donald Trump, who had hoped his handling of the economy would serve as the linchpin for his re-election campaign against Democratic rival Joe Biden.

Most national opinion polls show the former US vice-president with a double-digit lead over the incumbent, whose approval ratings have suffered due to his handling of the pandemic and civil unrest following the killing of George Floyd.

The trends have been particularly noticeable in the south and west, where states such as Florida, Texas, Georgia and Arizona — all of which Mr Trump won against Hillary Clinton four years ago — have been particularly hard hit by the new outbreak and have seen support for the president drop below 2016 levels.

Mr Trump has continued to tout signs of an economic rebound, saying the US economy was “roaring back” on Thursday after new official figures showed employers added 4.8m new jobs in June and the unemployment rate dropped to 11.1 per cent.

He noted that economic data for the third quarter, which ends September 30, would land shortly before election day on November 3.

However, the June employment data was collected before the new outbreak forced officials in Texas, Arizona and Florida to roll back reopening plans, raising questions over whether the rebound can continue.

With the prospects of a darkening economic outlook, an overwhelming 82 per cent of likely voters said they supported an extension of benefits in the $2.3tn Cares Act, the US economic stimulus programme.

A total of 66 per cent said they favoured extending the programme’s extra unemployment benefits, which are due to expire at the end of July. The issue of extending those payments, which include an extra $600 a week on top of state benefits, has become intensely partisan, with Republicans arguing many Americans are now earning more when they are unemployed than they did in work.

Eighty-four per cent said they would support an extension on the current moratorium on evictions in federally backed housing; more than three-quarters backed a cut in the payroll tax — a pay cheque deduction used to fund federal benefits — which Mr Trump has also supported, although many in Congress from both parties have been reluctant to embrace it.

US politics & policy
FT-Peterson Economic Monitor: Are Americans better off than they were four years ago? 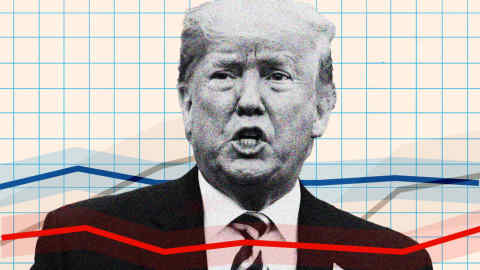 The FT-Peterson poll seeks to follow whether likely voters feel better or worse off since Donald Trump became president in 2017. Ronald Reagan defeated Jimmy Carter in 1980 after asking US voters: “Are you better off than you were four years ago?”

The latest survey found 37 per cent of voters said they were financially better off since Mr Trump became president, compared with 29 per cent who said they were worse off. The figures have remained largely unchanged since coronavirus first began spreading across the US.

The FT-Peterson Poll was conducted online by Global Strategy Group, a Democratic polling company, and North Star Opinion Research, a Republican group, between June 23 and June 29. It reflects the opinions of 1,000 likely voters nationwide, and has a margin of error of plus or minus 3 percentage points. The Peterson Foundation is a non-partisan, non-profit organisation focused on America’s fiscal challenges. 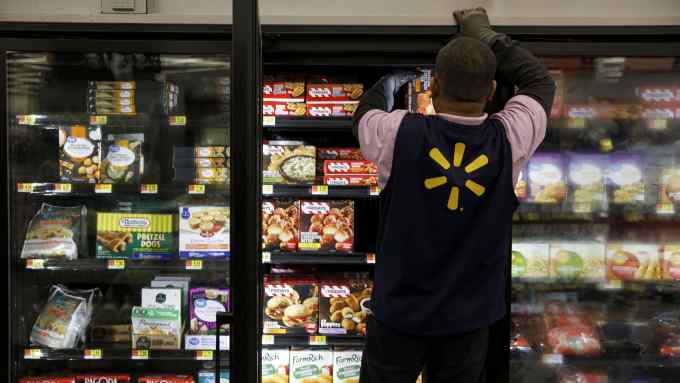