What the City stands to lose and gain from Brexit

Sectors such as foreign exchange trading have boomed during EU years

The future of the world’s leading financial centre is tied to the result of Britain’s June referendum on EU membership — on that, at least, campaigners on both sides can agree.

The City of London has long complained of Brussels regulations that some opponents of the EU say are far more trouble than they are worth. At the same time, the financial centre’s evolution in recent decades — in particular, its rise as a springboard for selling products to European markets — has left EU supporters fretting that Brexit could drive business from the City and leave it much weaker than before.

In truth, no one can predict with confidence what the impact of Brexit on the City might be — partly because of the wide range of possible post-Brexit deals that could be struck between the UK and Europe, and partly because of unpredictable shifts of sentiment.

But if pinning down how Brexit would help or hinder the City is elusive, it is relatively straightforward to identify the sectors of the financial services industry that have prospered to date, at least in part thanks to their single-market access to the rest of the EU. These include foreign currency trading, particularly in the euro; investment banking; insurance; and cross-border sales of securities

Here, on the basis of interviews with some of the City’s top financiers and policymakers, are five benefits that many say the City has drawn from EU membership — as well as the main complaints about regulation.

London has dominated the world’s foreign currency trading market for more than a century. But trading has accelerated since the creation of the EU single market and, still more, since the arrival of the euro in 1999. Today it is by far the biggest centre for trading the currency.

Precise figures are not available, because automated trading data are not categorised by location, but Darryl Hooker, co-head of EBS BrokerTec Markets, says that during the European trading day the “vast majority” of euro-dollar trading takes place in London rather than in regional rivals such as Frankfurt or Paris.

Although some traders express confidence that London would remain the leading global foreign exchange base even if the UK left the EU, André Villeneuve, the former head of the London International Financial Futures and Options Exchange, says the future of euro trading could be thrown into question.

Last year the EU’s highest court ruled against a legal attempt by the European Central Bank to deny euro liquidity to clearing houses based outside the eurozone. The measure would have in effect forced the clearing and settlement of euro-based transactions into the eurozone. “The idea that we would win that argument if we were outside the EU is fanciful,” says Mr Villeneuve.

Investment banks prospered as London bolstered its role as the world’s largest foreign exchange trading hub. By the same token, their future in the city could be profoundly affected should the UK leave the EU.

“The biggest pick-up in our business in Europe was the advent of the single currency in 1999,” remembers Michael Sherwood, joint head of Goldman Sachs’ operations in Europe.

“We went from being a firm competing with ABN Amro in guilders, Deutsche Bank in Deutschmarks and BNP Paribas in French francs to taking a share of a much larger market. Our revenues increased 50-60 per cent in short order.”

Previously, Goldman, like other banks, had fragmented trading operations across Europe. “This was cumbersome, expensive and suboptimal from a risk-management perspective,” Mr Sherwood says.

Today, by contrast, the bank takes advantage of the ability to “passport” around the EU from the UK — exporting services without setting up fully-fledged local operations. In the eyes of bankers such as Mr Sherwood, this is not only efficient but a magnet that brings revenues and jobs to London — one that could be jeopardised by Brexit.

The City has always been about far more than banking. London’s pre-eminence in insurance, particularly marine insurance, dates back to the 17th century. Edward Lloyd’s coffee shop — the basis for today’s £30bn Lloyd’s of London market — started out as a venue for insuring ships and their cargoes.

Insurers, like foreign currency traders, are careful of overstating the consequences for their industry if the UK left the EU. But many are convinced it would accelerate the shift of business to other global insurance centres, such as Singapore and Japan. The argument applies across different areas of insurance, but the impact on the London-dominated marine market could be the greatest.

If insurers do not have the freedom to write cross-border business as they do now, and have to set up local operations across the EU, there will be potential cost increases

At present London commands a third of the $18bn global marine insurance market, according to Marsh, the broker. Of that, insurers say about 40 per cent is cross-border EU business.

The ability to write business from London passport-free across the EU keeps prices low, says Marcus Baker, who chairs Marsh’s global marine business from the US’s group’s London base. “But if insurers do not have the freedom to write cross-border business as they do now, and have to set up local operations across the EU, there will be potential cost increases,” he says.

The opening-up of the EU market has made asset management one of the most dynamic areas of cross-border financial services. London has eagerly shared in the spoils.

One particular cross-border product, called Ucits — which stands for Undertakings for Collective Investments in Transferable Securities — has grown dramatically, benefiting three jurisdictions in particular. According to Morningstar, the data provider, the UK is neck and neck with Ireland as a domicile for Ucits, only beaten by Luxembourg, which, like Ireland, offers tax advantages.

During the past five years net assets held in Ucits in all three locations have doubled, principally because of cross-border sales. For asset managers who do not do cross-border business, threats to the Ucits market are irrelevant. For others, they are deadly serious.

For a large chunk of the industry the risk is clear: Brexit would push the UK portion of the business — worth more than €1tn last year — to Luxembourg or Dublin.

Immigration is probably the most sensitive topic for the British electorate ahead of the Brexit vote. Many conflate the current refugee crisis with the arrival of workers from central and eastern Europe. But, for the City, unlike much of public opinion, the free movement of people enshrined in EU law is a big plus. Even some anti-EU hedge funds concede the point.

“Twenty per cent of our top people are from the EU,” says one fund boss. “It would be very awkward if it became more complicated for them to be here than it currently is.”

Financial services employers rely heavily on EU workers. “The City attracts the best financial services workers from across the world,” says Chris Cummings, chief executive of The CityUK, a lobby group. “But EU nationals dominate, in large part because of the ease of working across the single market.”

Almost 11 per cent of the City’s 360,000 workers come from elsewhere in the EU, according to the latest census. That is by far the biggest contingent after the 78 per cent accounted for by domestic labour. Ireland, France and Italy between them account for nearly half of all the City’s EU migrant labour.

“For independent organisations that are not geared or bailed out by the taxpayer, the suggestion that they should have caps on how people are paid is ridiculous,” says Oliver Hemsley, head of mid-market broker Numis Corp. “All it does is raise salaries and imperil organisations at times of financial difficulty.”

Mifid 2, the sweeping regulation intended to shake up trading in the EU, is also widely resented. In anticipation of the measure, UK asset managers such as Aberdeen Asset Management, Baillie Gifford and Stewart Investors have stopped paying brokers for research out of dealing commissions.

Simon Fine, chief executive of Shore Capital Markets, warns of “the unintended consequences of Mifid 2 for the small and medium enterprise sector — one of the bedrocks of the UK economy.” He argues this will drive up the cost of capital for such companies. “With less commission around there’s going to be less independent research published in growth areas of the market.”

READ MOREBrexit: in or out
Brexit debate unnerves continent’s service workers in UK 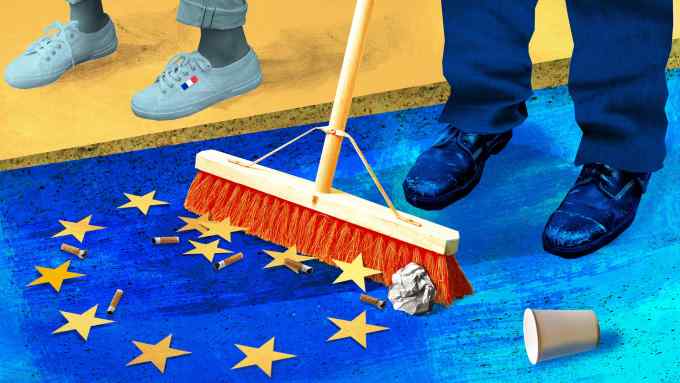