On a prominent wall in the Foreign Office in London hang a series of portrait mirrors, each labelled with a senior diplomatic role that has not yet been held by a woman.

The Foreign and Commonwealth Office installed the mirrors in 2018 to encourage its female staff to stand in front and “see themselves” in coveted roles, such as ambassador in Paris or permanent under-secretary of the whole government department.

In a highly symbolic moment, the mirror for ambassador to Washington, one of the most coveted and most dem­anding, will shortly be replaced with a picture of Karen Pierce as she becomes the first woman to take on the job.

Currently the UK’s permanent representative to the UN, Dame Karen has been posted to Tokyo, the Balkans and Geneva since joining the FCO in 1981. She was also the UK’s first female ambassador to Afghanistan in 2015 and 2016.

While experience in countries with warring factions is not essential to securing a top FCO posting, the bipartisan hostility between Democrats and Republicans in the US leads one diplomatic official to observe that her “conflict zone experience could be useful”.

Dame Karen also takes over at a time when the longstanding “special relationship” between London and Washington is under strain.

The UK has been without an ambassador to Washington since the embassy was shaken by the resignation of Kim Darroch last year, when he was forced to quit after confidential criticism of US president Donald Trump was heavily leaked.

Former colleagues say the appointment of Dame Karen, whom they commend for “gravitas” and “poise” as well as a “top class brain”, could not come at a more crucial time. Mr Trump expressed his fury last month to UK prime minister Boris Johnson after he ignored US warnings and granted the Chinese telecoms company Huawei access to Britain’s future 5G mobile phone networks.

“One of Karen’s best assets is that she has presence and force,” says Alexandra Hall Hall, former British ambassador to Georgia and former Brexit counsellor at the British embassy in Washington. 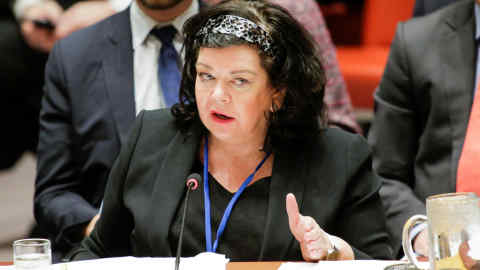 “What Karen brings is real policy heft married with a compelling personal style. She’s coming at an incredibly difficult time, so having some charm to defuse awkward situations and personalise the relationship with warmth is really important.”

Hinting at one challenge, Ms Hall Hall adds: “I don’t doubt her ability to sell, the question will be what the government is selling.”

Dame Karen’s style also sets her apart: she wore a feather boa at a meeting of the UN Security Council and is known for brightly coloured outfits. Just weeks into the UN job, she made headlines worldwide by trading barbs with Russia’s UN ambassador following the Salisbury poison attack.

What does the US ambassador do?

As ambassador to Washington, there is a public and a private role. The public diplomacy requires making speeches and an ability to engage the thousands of guests hosted in the British embassy every year. Dame Karen is known for her socialising — “she likes a party”, says a friend — and media profile. She is a frequent interviewee on US cable news channels including Fox News. “Americans like her,” says one colleague.

But behind the scenes, any ambassador takes on a substantive policy role in which they are expected to articulate ideas and arguments persuasively and in depth with leading policy experts.

“It requires an extraordinary level of expertise and the ability to master briefs on a whole host of issues,” says one former ambassador. “When your country is advocating a policy or a decision you know is going to be unwelcome by your host government, that can be very difficult. You may also challenge a host country on their human rights record, when at the same time working towards building a relationship.”

Another part of the job involves reporting back to London on the reaction of the host country to a British policy, as well as being required to warn the government if you believe the UK’s stance could cause problems.

Dame Karen is the first woman to be appointed to any of the four top jobs in the diplomatic service, a move that would have been unimaginable less than 50 years ago.

For a start, she is married. Until 1973, a strict “marriage bar” — maintained while dropped by other Whitehall departments — meant Britain’s female diplomats had to choose between professional ambition and a husband.

Today, 61 female ambassadors and high commissioners represent Britain abroad. The number has increased al­most threefold in 10 years, and represents 31 per cent of all heads of mission.

Barbara Woodward, ambassador to China, is one of a number of high profile women representing Britain overseas in prominent roles. Half the UK’s ambassadors in Africa are women, including NneNne Iwuji-Eme, Britain’s first black female high commissioner, in Mozambique.

“Championing women and diverse leadership is a priority for the FCO,” said Sir Simon McDonald, the department’s most senior civil servant, after Dame Karen’s appointment. “Whether it’s a young woman starting her first diplomatic placement, or a new ambassador to Washington, we support our staff, so they can best represent Britain’s interests around the world.”

He plans to be present when the mirror for the Washington job is replaced with Dame Karen’s photograph.

Essay competition: Win a place on an executive MBA programme

The Financial Times is launching its eighth annual Women in Business essay competition in partnership with Henley Business School and the 30% Club, which campaigns to improve women’s representation in boardrooms and at senior management level. The prize is a fully funded place on Henley’s part-time Executive MBA programme, with the winner announced in the FT in the autumn.

The competition is open to women and men who have relevant experience in the workplace either in managing a team, running a project or planning strategy. Entrants should answer this question in no more than 800 words: “How can organisations help women succeed by involving more men in their efforts? What strategies and actions are most and least helpful?”

Entries should be sent to mba@henley.ac.uk by May 18 2020. Terms and conditions can be found at: hly.ac/WiLscholarship