Gideon Rachman at home with Japan’s ambassador in London

Kensington Palace Gardens has a good claim to be the most exclusive road in Britain. It runs alongside the palace that was once home to Diana, Princess of Wales, and is now the residence of her son, Prince William, and assorted other royals. Several billionaires are reputed to own mansions on the street — including Roman Abramovich, the Russian owner of Chelsea Football Club and Lakshmi Mittal, the Indian steel tycoon. National flags flutter from many of the other houses to signal that they are ambassadorial residences. It is the Japanese ambassador — who resides at number 23 — who I am visiting on a bright summer’s afternoon.

Despite its rich and powerful residents, the wide avenue — which runs from Notting Hill Gate to Kensington — is only semi-private. There are police boxes at both entrances and armed policemen, still a relative rarity in London, can be seen strolling up and down. But nobody asks me my business, as I turn into the avenue from the Bayswater Road and stroll past a few joggers and pedestrians. At the appointed hour (midday), I press the bell on the gate of the Japanese residence. After a few moments of silence, the iron gates swing open and I walk up the crescent-shaped drive. The front door also opens, as if by magic, and I am ushered left, into a comfortably appointed sitting room. Sitting on a well-stuffed cream-coloured sofa is Koji Tsuruoka.

The ambassador is a relative newcomer to London. He arrived in June, after spending three arduous years negotiating the Trans-Pacific Partnership, a trade deal that is meant to break down economic barriers between the US, Japan and 10 other Pacific nations. As we are served tea, I suggest to Tsuruoka that the role of ambassador in London probably offers a gentler pace than the intense and highly technical TPP negotiations.

The ambassador, who is a young-looking 64, agrees that, under normal circumstances, the London job would be a relatively un-taxing posting. But these are not normal circumstances. The very month that he arrived, Britain voted for Brexit. “I had been told that the characteristics of Britain were consistency, continuity and stability. No surprises,” he says, shaking his head in bafflement. Brexit is potentially a huge issue for the many Japanese companies — such as Toyota, Nissan and others — that have invested heavily in Britain, to use the country as a production base for the EU market. I ask if many Japanese companies are now thinking of withdrawing? “Japanese companies want to stay here, they would hate to be forced out,” he replies diplomatically, if ambiguously.

One of the privileges of being an ambassador is that your residence is often decorated with works of art, designed to show the creative side of your country. So we take a break from diplomacy to inspect a cabinet full of Japanese ceramics on the other side of the living room. I am dazzled by a six-inch high blue porcelain jar, with a white and yellow streak down its centre. It is by Tokuda Yasokichi III — a ceramic artist who was designated a “national living treasure” by the Japanese government in 1997 — because of his mastery of the saiyu technique, which produces particularly vivid enamel glazes. The works of Yasokichi, who died in 2009, are on display in the Japanese galleries in the British Museum.

There are more works of fine art in the drawing room next door — and we linger for a while by “Red and White Plum Flowers”, a painting by Maeda Seison — one of the most celebrated Japanese artists of the 20th century. But my eye is drawn to the photo on the sideboard opposite of Emperor Akihito. Just a few days earlier, the emperor had given a speech, indicating his desire to abdicate. I ask the ambassador, what is going on? He replies that Shinzo Abe, the Japanese prime minister, is currently considering the situation. Perhaps the two men will negotiate a compromise, I suggest. “You don’t negotiate with the monarch,” I am firmly reminded. 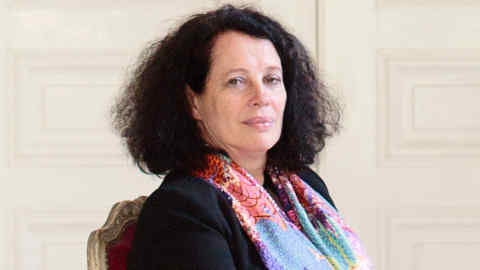 We move out into the garden which is pretty and well-tended — but surprisingly small, given the size of the mansion that it serves. I refrain from pointing out that the French ambassador, who lives on the other side of the road, has a much larger green space, which backs on to Hyde Park. (On the other hand, she also has a nightmare neighbour in the form of Jon Hunt, the founder of Foxtons, London’s brashest estate agency, who is insisting on digging out a giant underground car-park beneath his house for his collection of cars.) Tsuruoka says that he would like to have a garden party, but is worried by London’s changeable weather. I tell him that being rained on is an occupational hazard at any British garden party. “Is it acceptable?” he asks sceptically. “Normal,” I reply.

The ambassador shows me over to a rose bush in full bloom. He says that one of his recent predecessors had so much time on his hands that he had developed a passion for growing roses — and had even had a new variety of shrub rose named after him. “It’s one of those,” he says gesturing vaguely towards some splendid-looking blooms. “I’m afraid I don’t know which one.” (Later research reveals that the Ambassador Nogami is a yellow shrub rose, described as “extremely fragrant”.)

The current ambassador’s passions run more towards golf. In his study, which overlooks the garden, he shows me his favourite golf clubs. I also hear a curious story about his father, who had been a Japanese diplomat in Paris during the Nazi invasion in 1940 — and had then gone on to work at the Japanese embassy in Vichy France.

“We were the Germans’ allies,” notes Tsuruoka, “so they had to treat my father well. But still it was not an easy time.” He says that his father spent the last months of the war on neutral territory in Geneva and towards the end of the conflict found himself with very little to do. So he devoted himself to playing golf and managed to get out on to the course on 10 successive days.

“He said that he discovered that it’s only if you play 10 days in a row, that you can get your handicap down to par.” (This strikes me as one of the more unusual lessons to draw from the Japanese experience of the second world war.) After the war, his father, Senjin Tsuruoka, resumed a diplomatic career that ended only in the 1970s, with a posting as Japan’s ambassador to the UN. His son has inherited his father’s profession — and his passion for golf.

It is now 1pm and so we move to the conservatory for a sushi lunch. The mansions on Kensington Palace Gardens are listed buildings constructed in the 19th century and owned by the Crown Estate, which makes it difficult to add new rooms or structures. But the Japanese are fortunate that a previous 19th-century owner had seen fit to construct a glass-roofed conservatory in 1878 which is filled with light on a late summer’s day. I ask whether the ambassador worries that living in such pleasant surroundings might make it hard to return to normal life in Tokyo at the end of his posting. “Oh don’t worry,” he replies. “Our private quarters are a replica of a Japanese rabbit hutch. That will make sure that I don’t get too used to grandiose surroundings.”

As we settle down for lunch, I ask the veteran trade-negotiator for some tips for the British since Brexit means that we are about to enter many years of complex trade negotiations.

“Understand what the rules are and don’t take anything lightly or for granted,” he suggests. “And remember how many details you have to master. You might have to negotiate tariffs and standards on 6,000 different products, item-by-item.”

This task is all the more daunting because there are very few trained trade negotiators within the British civil service. “Perhaps we could hire you, once you are finished here?” I suggest. “I would not advise that”, he replies mildly. Certainly a light-filled conservatory in Kensington Palace Gardens seems like a pleasanter environment than the gloomy conference rooms in which trade-deals are negotiated.

Tsuruoka keeps his golf clubs in his study. His favourite objects are two putters. “Unfortunately they are both American,” he says. “The Japanese clubs are too expensive for me.”

His most trusted companion is a 40-year-old Ping putter. “To have the same putter for 40 years is very rare,” he remarks. “But this was a lesson I learned from my father. He had about 15 putters and could never choose between them and was a really bad putter. So I decided to stick with just one.”

The second is a TaylorMade club — a gift from a fellow diplomat in Indonesia. The two men worked on helping newly independent East Timor.

Tsuruoka has already had the chance to play the course at Royal Troon, in Scotland, shortly after the British Open. He shot an 84.

This article has been subject to a correction.