Despite coronavirus, the Paris fashion shows went on — just with face masks

Paris designers showed collections for surviving or transcending the apocalypse

The fashion world’s favourite greeting — a theatrical double kiss — was off the agenda in Paris, as anxiety about the coronavirus intensified. Not surprising really, given that hundreds of showgoers had just come from Milan, close to where 11 towns had been put on lockdown. And now they were all clustered together in Paris. At the otherwise beguiling Dries Van Noten show on Wednesday, surgical masks were handed out, although there were only a handful of people wearing them in a manner that might actually block germs. A few Chinese labels had already cancelled shows; LVMH called off a reception for the finalists for its prize for young designers; and Net-a-Porter cancelled a party. Not all used the c-word, but it was obvious why.

Against this uneasy atmosphere and steep declines in luxury stocks — LVMH shares are down 16 per cent from a 52-week high of €439 on January 17 — the Marine Serre show offered a glimpse into a disturbing future partly inspired by the sci-fi novel-turned-film Dune. In a red-lit concrete basement, the winner of the 2017 LVMH Prize sent out models in city-worker suits and face masks, cocoon-like puffers with exaggerated hoods, patchwork knits and draped dresses made of silk scarves and white lace. It was as if a management consultancy firm and an artisanal textile house had accidentally booked themselves on to the same flight out of Planet Earth when the asteroid hit. “We have only one choice, which is to face our fears, and keep moving,” Serre said.

Other shows offered a lighter escape. One of the most uplifting collections of the week came from 2019 LVMH Prize finalist Kenneth Ize. The excitement was palpable for the Nigerian-Austrian designer’s first show in Paris, which was vibrant with its beautiful striped trenches, jackets and flared trousers in traditional Nigerian aso oke cloth, as well as knitted trousers and jackets in browns, pinks and purples, for men and women. Ize’s eponymous label might only be four years old, but it has a strong visual identity — crucial in today’s crowded luxury landscape. The biggest names showing in the first half of Paris Fashion Week, such as Dior, Saint Laurent and Chloé, unveiled collections strong on brand signatures.

Since joining Dior just under four years ago, Maria Grazia Chiuri has also been making art, as well as feminism, central to the house’s identity. She staged her AW20 show in a specially built cube in the Tuileries, where feminist collective artist Claire Fontaine designed a series of illuminated slogans that shouted “Patriarchy = C02” and “Consent”. While the artwork seemed superfluous to the clothes — wearable Sixties and Seventies-inspired checked trousers suits, blanket coats and gilets, a knitted reworking of the Bar jacket — it reinforced the idea that Dior is a brand of intellectual and moral values.

Saint Laurent’s values lie in heritage and high glamour. Anthony Vaccarello delivered both with a show combining sexy latex leggings, skin-tight tops and thigh-high boots coupled with bourgeois pussy-bow blouses and blazers in fabrics inspired by the Saint Laurent archive. At Richemont-owned Chloé, the house’s Seventies-inflected wide-leg trousers and suits, romantic maxi dresses and white broderie anglaise minidresses and blouses were updated with a knitted rib sleeve on a tweed jacket, and a contrasting paisley trim on a coat. It was a fuss-free take on bohemian, which effectively balanced masculine shapes with fluid fabrics. At Loewe, designer Jonathan Anderson also impressed with sculptural volumes explored though ruffled dresses and oversized coats, many with modern art-like panels and embellishments.

Lanvin is in the midst of a turnround under Chinese owner Fosun International, having floundered creatively and financially since Alber Elbaz departed in 2015, under its previous possessor. Current designer Bruno Sialelli, formerly of Loewe, is bringing a coherent identity back to France’s longest-running fashion house. His collection of ultra-feminine, even girlish ruffled silk dresses and impeccably cut heiress coats and jackets had finesse. At Kenzo, too, there is a new designer. Felipe Oliveira Baptista’s debut collection for the label had plenty of utilitarian attitude via parkas, ponchos painted with the Kenzo tiger and oversized outerwear worn with desert hats (yet more protective clothing). While his shapes felt modern, moody colours made it a little sombre in parts.

There was a much more opulent vision at Paco Rabanne, where designer Julien Dossena had the front row in raptures. He took the house’s signature chainmail, worn in the Sixties by Jane Fonda in Barbarella, and reimagined it in slinky dresses, shawls and skirts worn with fringed hoods. These appeared alongside garments that suggested religious robes, from ruffled collar blouses to monastic capes designed to paint women “as the religious masters of ceremony”.

Harrods’ fashion and buying director Lydia King was a fan, noting her customer was adventurous enough to wear the headpieces. With the percussive clinking of chainmail mingling with choir music as the models walked, it proved a welcome distraction from the outside world. 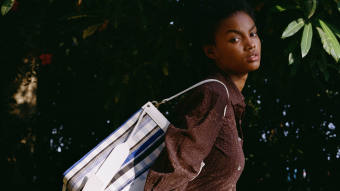