How the global bond rally lost its fizz

The negative-yielding bond universe has shrunk by $3tn since August

A $1tn fall in the value of global bond markets this month is rekindling one of the biggest debates in finance: is the bull run in bonds finally coming to an end?

For decades, the only way for bond prices has been up, reaching mind-boggling records in recent months. By the end of August, some $17tn of bonds, about a third of the global total, were trading at such high prices that buyers were guaranteed a loss if they held them to maturity, rewriting the rules of fund management.

The rally, fuelled of late by nerves over the economic impact of trade wars and runaway expectations for central bank stimulus, has meant that borrowers have been able to bring new debt to market at a tiny or even negative cost, piggybacking on investors’ hunt for safe assets.

The yield on the Bloomberg Barclays Multiverse index — the broadest bond market gauge that tracks debt with a total value of more than $58tn — has jumped sharply this month, from a record low of 1.4 per cent to 1.65 per cent as of the end of Friday.

In dollar terms, that translates into the global bond market losing over $1tn of value in just 10 trading sessions. It also means that the stack of negative-yielding bonds has shrunk by more than $3tn. Bonds remain historically highly priced even now, but the pullback suggests that some of the forces pushing nervous investors into the world’s premier safe assets have been overdone.

“There is no question that Europe taught us that if we have a recession, there really is no lower bound [in interest rates],” said Gershon Distenfeld, co-head of fixed income at asset manager AllianceBernstein. “But if we avoid the worst, rates are probably too low.”

Even benchmark borrowing costs in Japan — caught in the vice of the central bank’s “yield curve control” policy — have risen from minus 0.29 per cent to minus 0.15 per cent.

The Multiverse index has lost 1.4 per cent already in September. If sustained, this will be the worst monthly loss in over a year, and the 13th biggest monthly decline of the past decade.

European markets have added to the sense that the rally, while not about to reverse, is running out of steam. Last week, the European Central Bank cut deposit rates even deeper below zero and restarted its bond-buying programme in a fresh bid to drag up dour inflation. Bond yields in the region, however, have not declined further.

“Since the ECB meeting last week the market’s narrative seems to be changing, and we tend to agree with the shift,” RBC analysts argued in a recent note. “We recommend not to fight the yield increase.”

Investors now appear more open to believing that the global economy will dodge a recession. Optimists can point to upbeat US retail sales or a positive turn in German economic sentiment, and argue that the most extreme bearish cases for the UK and Italy now appear somewhat less likely. That all adds up to a brightening outlook that hurts the bond market, according to RBC.

“All these arguments are falling on fertile ground as the market had worked itself in a negative state of mind during August. Hence, there is likely to be a substantial amount of position adjustment still to come once asset allocation committees have met,” the bank’s strategists argued in a note.

China’s announcement of a bevy of policy changes at the start of the month marked the turning point for the summer’s bond market narrative, which had “overshot” at least partly due to technical factors such as mortgage bond hedging, according to Ashish Shah, co-chief investment officer for fixed income at Goldman Sachs Asset Management.

French bank Société Générale has also advised clients to lighten their exposure to fixed income in response to what it sees as “overly aggressive” bets on the scale of impending monetary easing from the major central banks.

However, analysts and investors are reluctant to call the end of the bond market’s long-term rally, given the seismic forces that power it. Inflation — the market’s kryptonite — remains an unlikely danger, and although a global recession might be averted, there are disappointingly few signs of a durable upswing.

FT Series
Negative yields: Getting to grips with the great bond rally 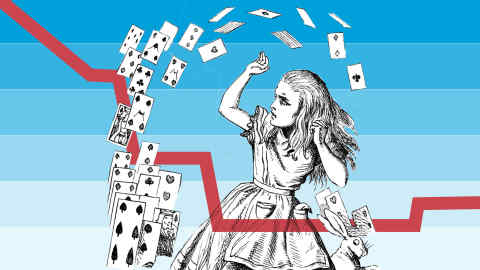 The end of the three-decade bond bull run has been spotted more often than Elvis, but given the length of the post-crisis global expansion and the still-simmering trade tensions between the world’s two economic superpowers, many investors remain convinced that the all-time low in bond yields is yet to be seen.

“We have to recognise that yields are a function of a lot of things . . . There is still a tremendous amount of uncertainty when it comes to economic growth, politics and trade policy,” Mr Distenfeld said.

Technical factors still underpin the fixed income market, such as nearly indiscriminate appetite from long-term institutional investors likely to seize on any pick-up in yields.

“You have to look at who the buyers are,” said Sophie Huynh, a cross-asset strategist at Société Générale. “The pension funds, the insurers, they don’t have a choice, and that is not going to change tomorrow. You are still going to have the flows.”

Before one can call the bottom in global bond yields, investors need to see the economy weaken significantly, markets sell off and the Fed embrace a full rate-cutting cycle, said Priya Misra, head of global rates strategy at investment bank TD Securities. “We are nowhere close to the bottom in rates.”