We use cookies (opens in new window) for a number of reasons, such as keeping FT Sites reliable and secure, personalising content and ads, providing social media features and to analyse how our Sites are used.
Manage cookies
Accept & continue
Special Report Health sector

Employers have the incentive to provide healthcare

Last year, about 100 employees at the global healthcare company GSK’s offices in Rio de Janeiro noticed they were developing thick rib-like fat deposits on their thighs and arms, each about 5cm apart.

The lesions were accompanied by a tingling and burning sensation in some employees. Others reported feeling more tired than usual. The employees — mostly administrative and IT workers — were diagnosed with semicircular lipoatrophy, a relatively new condition that affects sedentary office staff and is thought to be caused by a combination of poor office furniture, encouraging pressure on the spine and other parts of the body, as well as proximity to electromagnetic equipment.

As a global healthcare multinational GSK knows better than most that businesses pay a price when illness strikes. The company had successfully cut the number of days lost to injury and illness over the past decade, installing a range of programmes from driving tuition for employees in India — to help improve their safety on the roads — to offering vaccines to staff in Asian countries.

GSK acted quickly — and successfully — to remedy the outbreak of semicircular lipoatrophy, replacing furniture, cabling and introducing two-hour breaks. Nonetheless, the disease led to an increase in staff absenteeism in 2015 compared with previous years, providing a clear reminder to the business of the costs of workplace illness.

According to the International Labour Organisation (ILO), there are 270m occupational accidents and 160m occupational diseases each year, costing businesses about $2.8tn in lost working time and costs for treatment and rehabilitation.

Furthermore, more than 2m people lose their lives each year through accidents and diseases linked to their work.

The growing awareness of the cost of ill health to business has spawned a multitude of programmes aimed at promoting employee wellbeing, with nearly 75 per cent of employers believing it is their responsibility, according to a US survey by consultants Aon Hewitt. 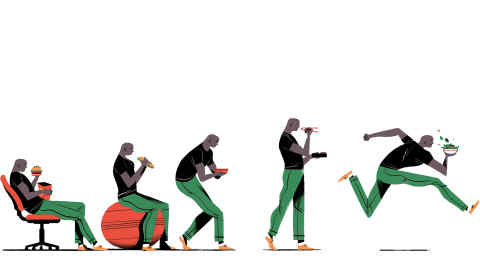 Many such as GSK, one of this year’s Britain Healthiest Workplace winners, recognise that investment in employees is good for the health of the business, boosting morale and productivity.

Ron Joines, medical director in GSK’s environmental health and safety group, says: “When we began to examine our flagship programmes, we found they offered good outcomes for health and organisation culture, leadership, engagement and productivity. It became a catalyst for even greater investment.”

Companies most active in healthcare tend to be in countries where state-funded provision is weaker and employers have legal obligations to look after staff’s medical needs. In emerging markets, employers often pay a small monthly sum to allow staff to meet basic medical needs.

“In Poland, Romania or India it can take all day to see a doctor so a system which enables an employee to see a doctor or to get tests done immediately is valuable to employee and employer alike,” says Max Hotopf, chief executive of Healthcare Business International, which provides research and conference services.

Nonetheless, even a country like Finland, which has a well established state medical system, has seen the development of Terveystalo, a large occupational healthcare group. Employers commission it to provide employees’ medical care, in recognition of the fact that this improves staff satisfaction and performance.

Forward thinking companies may have preventative programmes, such as the provision of vaccines and encouraging staff to give up smoking or to exercise to combat obesity. The advantages can be considerable. Britain’s Healthiest Workplace analysis indicated that employees who moved from being obese to overweight reduced their average presenteeism — showing up at work in a state of sub-optimal health — from 9.2 per cent of productive time lost to 6.9 per cent in the space of a year.

Many UK employers, not least small and medium-sized companies, rely on the state-run National Health Service to take care of the healthcare needs of staff. Acknowledging the strain on the NHS, some employers, particularly larger ones, may see a need for their own schemes to give staff more rapid treatment. Employer-funded private insurance schemes, however, have declined from 3.04m policies at the end of 2009, to 2.99m at the end of 2014, say healthcare consultants LaingBuisson.

Health and the Workplace

Industrialisation and urbanisation in the developing world are leading to less healthy diets and lifestyles that will greatly increase the reach of preventable conditions previously concentrated in western countries. We look at what companies can do for their employees.

The ILO warned this year that longer working hours and lower wages meant workplaces were “becoming ever more stressful”. Companies may end up paying the price.

Dame Carol Black, a senior policy adviser on work and health to the British government, sees “nothing soft and fluffy at all about investing in workplace health”. Improving employees’ sense of wellbeing helps a company’s bottom line, she says.

She emphasises a need to bolster workforce morale so that employees feel they are highly valued and will therefore go beyond the call of duty in satisfying customers’ needs. Although good practice is difficult to define, she describes it as offering some flexibility and control over working hours and the pace of work, as well as the decisions that affects staff.

“You can do all kinds of things to improve productivity but if you have a disaffected workforce, it’s very difficult,”she says. Workplace health is more than putting bottles of water and fresh fruit on the table and ticking a box, she argues. “If you really want a healthy and engaged workforce you want the chief executive and the board involved.”

Strong middle management is crucial. “A doctor’s note will nearly always say that their patient’s back packed in,” says Dame Carol. “But most people leave their job because they feel bullied or don’t like their line manager. No doctor will say ‘hates line manager’ on a sick note.”

In the UK, although mental health problems account for the majority of workplace illness, musculoskeletal conditions rate second, particularly for manual workers. They cost the economy in 2013 more than 30m working days, according to official figures.

Many days are lost across all pay levels to absence and presenteeism (see table) and such problems are likely to increase as people extend their working lives, in part because of cuts to pensions, says Aon Hewitt. In 2014, 10 per cent of over-65s were in work compared with 5.5 per cent in 1992. Employers who recognise the benefit of providing healthcare services include some of those that sell the benefits of fitness to customers. Head office employees at sportswear chain Sweaty Betty are offered the chance of such as exercise classes and other activities.

Both Sweaty Betty and sportswear and equipment manufacturer Adidas UK are among this year’s Britain’s Healthiest Workplace winners in the medium-sized companies category. Adidas UK noticed musculoskeletal problems were rising, so it now offers physiotherapy and chiropractor services to staff. Among other benefits, it organises bowel cancer screening. Adidas says the results have been staggering. Its average employee takes 2.5 sick days per year compared with an industry average of about six.

At GSK, about 80 per cent of staff with semicircular lipoatrophy have recovered since they were diagnosed. It confirms that with employee health and wellbeing “a business priority for us, the healthier, stronger and more resilient our business will be”.