US stocks power to record high

The US stock market powered to a new high on Monday, with companies hard hit by the coronavirus pandemic providing a lift to the benchmark S&P 500.

The index rose 1 per cent to close at a record 3,431.28. Shares of airlines, cruise operators and retailers, which have been pummeled this year, were among the top performing stocks on Monday as coronavirus cases in the country slipped and there were hopes of swift progress towards a vaccine.

The Trump administration is considering bypassing US regulatory standards to fast-track an experimental vaccine being developed in the UK by Oxford university and AstraZeneca before the November general election, the Financial Times reported at the weekend. The US has also just given emergency authorisation for the use of plasma from recovered patients to treat some people currently in hospital.

Shares of more than four-fifths of the companies within the S&P 500 advanced on Monday, with Delta Air Lines, cruise owner Carnival and retailer Kohl’s all up more than 7 per cent. Banks, oil majors and industrials groups like Boeing also climbed.

But it was smaller gains by some of the largest companies in the S&P 500, which have come to dominate the index, that helped push the benchmark further into record territory.

Apple, which now accounts for more than 7 per cent of the index, rose 1.2 per cent. The market value of the iPhone maker swelled to $2.1tn, pushing the company’s price-to-earnings ratio to 34 times, using its expected earnings over the next 12 months.

“Big-cap tech continues to ride the wave of euphoria and momentum while most other areas of the market that have lagged are more worried about the macroeconomic environment,” said Peter Boockvar at Bleakley Advisory Group. “We need the latter to reverse in order to maintain the former.”

He added: “I certainly can’t give you a good fundamental reason for the rally because I can’t find one.”

The S&P 500 has climbed for four consecutive weeks, wiping out the remainder of the steep losses caused by the coronavirus crisis. It has soared 57 per cent from the low it hit in March.

Riskier junk bonds rose alongside the advance in equity markets on Monday.

Treasuries and investment grade corporate bonds weakened, by contrast. The yield on the 10-year Treasury rose 0.02 percentage points to 0.65 per cent. A bond’s yield rises as its price falls.

European equities gained strength from the buoyant mood. The Stoxx Europe 600 closed 1.6 per cent higher, with the FTSE 100 adding 1.7 per cent and benchmarks for Germany, France and Italy all climbing by more than 2 per cent.

Market participants said, in addition to Covid-19 developments, they would be paying close attention to the Kansas City Fed’s virtual Jackson Hole summit this week. Economists are expecting Jay Powell, the central bank chair, to announce details of the Federal Reserve’s wide-ranging review of monetary policy.

“Indications that the Fed might adopt a so-called flexible average inflation-targeting approach could lead yields and rates of market-based inflation compensation slightly higher, while keeping a lid on real rates,” UniCredit analysts said in a note. 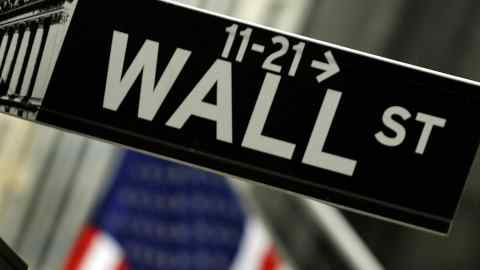 The other US event to take centre stage this week will be the four-day Republican National Convention, when Donald Trump will accept his party’s nomination to run for a second term as president.

Asian equities were buoyant after recent weeks of caution over the regional spread of coronavirus. Hong Kong’s Hang Seng index added 1.7 per cent while the CSI 300 gauge of Shanghai and Shenzhen-listed stocks rose 0.8 per cent. In Tokyo, the Topix edged 0.2 per cent higher and South Korea’s Kospi index gained 1.1 per cent.