Start a 4-week trial
How To Spend It: The Travel Issue
See all 11 stories
HTSI  Travel

My palace in the clouds: a blissful honeymoon in Switzerland

Closing the door and entering the room, with its pistachio-green silk-covered walls, we finally exhaled. Above us, a ceiling ringed with delicately worked 18th-century plaster flowers, cameos of Greek philosophers crowning the corners. Walls clad in richly carved wood panelling. Two small balconies overlooked the vast jags of dusty-pink Alps, so close one could nearly reach out and touch them. Below, unspooled Soglio, a tiny stone-and-timber village of cobbled streets, fountained squares and rustic farms clinging to the mountainside in the Grisons, along the edge of the Swiss border with Italy. The bleating of lambs and the tinkling of the bells attached to their mothers were audible from every corner.

A steep switchback road, dotted with stone shepherd’s huts glimpsed through majestic old chestnut groves, winds its way up to the very top of the town, where the hotel Palazzo Salis has held court since 1630. Originally built as Casa Battista, the seat of the von Salis family, who still own the property, the residence has spent the past 145 years operating as a 16-room hotel both for discerning Swiss bohemians and as a gracious stopping point for intrepid walkers on the Via Panoramica that runs along the northern ridge of the valley. The Italian painter Segantini claimed this place was “the gateway to paradise”, and it remains an elegantly faded Swiss-pastoral fantasy – ours, if only for the weekend.

We arrived – not for the first time – after an early-morning train ride south from Zurich, with the last leg in a hire car from Como. Greeted by a familiar classical façade, through the ornamented wood front doors, up through the castle-like central hall lined with von Salis family paintings, armour and immense original furnishings, we were ushered into our pale-green dreamsicle room, still drunk on happiness and relief from the day before. It was the end of September, a golden month between the first and second waves of the pandemic.

I unpacked: slightly squashed slices of leftover chocolate wedding cake from Sprüngli on the Bahnhoffstrasse; an armful of flowers rumpled by the train ride; two heavy suitcases; a garment bag carrying one pale-yellow silk wedding suit, four pairs of nude heels and a freshly signed Swiss marriage contract in a complementing red-leather portfolio, translated into five languages. This, our holy grail of documents, Swiss officials call the family book, as if each new marriage is the beginning of a story. Ours, of course, is a romance – with the hotel and one another.

Before the pandemic, we had been an international couple, juggling plane tickets, passports and Google calendars, and when border restrictions started we knew we needed to make plans to ensure we could be together. Bittersweet though it was to envision a wedding without our families, the prospect of our marriage was less a yes-or-no question and more a how-and-how-soon one. We had been good friends for several years before we got together: me, an American in London; him, British but a longtime Swiss resident; us, sending books through the mail to fill the gaps between platonic lunch dates. When we fell in love it was deep and irrevocable, with a mutual respect and tenderness that comes only with years of friendship.

When it came to marriage, Switzerland turned out to be our Switzerland, a neutral territory to which to elope despite the pandemic, if only we could surmount the paperwork to prove our relationship and obtain permission to travel there. I was sweaty-palmed for my masked interviews at the Swiss Embassy in Washington DC; he filled out request after request for guidance in the ever-changing landscape of travel restrictions in Switzerland. I bought a ticket, packed a wedding veil in my suitcase and held my breath on the plane, seated next to a woman in a full hazmat suit. Only a short quarantine later, we were married, simply but thrillingly, at the courthouse, in a masterclass of Swiss efficiency. Afterwards, I wept with happiness and relief.

The Palazzo Salis enveloped us for our emergency honeymoon, fresh newlyweds far away from our loved ones during what would have otherwise been a raucous celebration. It wasn’t our first visit, though. Soon after we fell in love, my husband had flown me to Switzerland for a weekend away, saving the particulars as a surprise. Frankly, I was a bit worried. From all outside appearances, he fits the bill of an austere but kindly modern architect, well-versed in what must be the 50 words for concrete in Swiss-German. I bend more to the historic and graceful, a gardener and florist who worships at the altar of the wild. Would he take me to some chic but sterile monolith, devoid of character? Or worse, an embarrassingly over-designed, flash-in-the-pan boutique hotel?

We made our way south on the train (always a good start), past the Rigi and the bright blue lakes lapping at her feet. We huddled in the café wagon over cappuccinos and shockingly expensive croissants. We rented a car for the last leg of the journey and as we wound our way up into Soglio, sunlight streaming through the chestnut trees, I knew I was safe in his hands. Soon we were nestled high in the valley, engulfed in a cloak of impossibly glorious mountains. Soglio is often touted as the most beautiful village in Switzerland; depending on your proclivities you could just cut to the chase and call it the most beautiful village in the world.

The moment I crossed the threshold of the hotel on that first visit, I was enchanted. The palazzo is intimately proportioned, warm and liveable, yet grand in both spirit and history – and barely a lick of concrete in sight. The building’s classical geometry is pleasingly simple, pastoral and unchanged. We slipped through the French doors at the back to discover a magical garden, a vision of delight with the Alps shimmering as a backdrop. Safely ensconced between the house and the steep mountainside, the garden feels cocooned, a small jewel walled away in the otherwise rugged landscape – a gently terraced, asymmetrical series of clipped formal hedges, with naturalistic borders of rare tree peonies, irises and roses kissing each other’s necks. Comfortable chairs are provided for sunning oneself in complete tranquillity. Luxuriant fruit trees offer shade, and two giant sequoias stand guard at the rear, harking back to a 19th-century von Salis relative with a penchant for plant collecting. The earliest traces of the garden date to 1701, but the place itself feels somehow beyond time. After a two-month stay at the Palazzo Salis in 1919, Rainer Maria Rilke wrote to a friend that he longed for a garden for his future house “exactly like the one here, without the slightest change… overgrown but not ruined”. Me too.

That first visit, we stayed in the room that had been Rilke’s 100 years before. Blue-grey panelled walls, wide views of the mountains from the stately bed and, on the night stand, a small anthology of Rilke’s poems in German, for my love to translate to me aloud. I had no choice but to marry the man who brought me there. (He had also booked us into Peter Zumthor’s baths at Vals for an interlude afterwards, but we never bothered going. There’s always our next honeymoon, I suppose.)

The Palazzo Salis is a deeply romantic yet idiosyncratic place, and it makes no apologies for its sometimes tenuous transition from private home to public hotel. It is an ageing grande dame that wears its fabulousness lightly, and is not for the amenity seekers or the room-service sorts. The dining room may be small but is truly mighty at the kind of rustic-yet-refined Swiss country food that relies less on vats of melted cheese and more on local game and the neighbouring vegetable plots. We wanted nothing more.

“It is not easy to adapt to new needs without spoiling the house,” writes Charlotte von Salis-Bay of the family’s approach to preservation. “We are simply not prepared to offer guests more comfort than the house can bear.” This profoundly Swiss take-it-or-leave-it mentality means the interiors have remained seemingly untouched by modern modes of travel. There are a handful of shared bathrooms for the smaller guest rooms, and a dining room is the sole means of sustenance; the whole place oozes a Merchant Ivory flair (though there is, at least, wifi).

The glossy resorts of St Moritz are just a 45-minute drive along the valley, but the Palazzo Salis feels of a different stratosphere. Like an aristocrat in a moth-eaten sweater, it has nothing more to prove – it simply offers gracious refuge from the terrors and triumphs of modern life. Gazing at the 18th-century plasterwork above, and seeing the snowy peaks of the Sciora mountains glowing in the sunset beyond the balcony, we vowed to return, appreciating the imperfections as well as the glories, for as long as we both shall live.

Explore the series
READ MOREHow To Spend It: The Travel Issue
My palace in the clouds: a blissful honeymoon in Switzerland 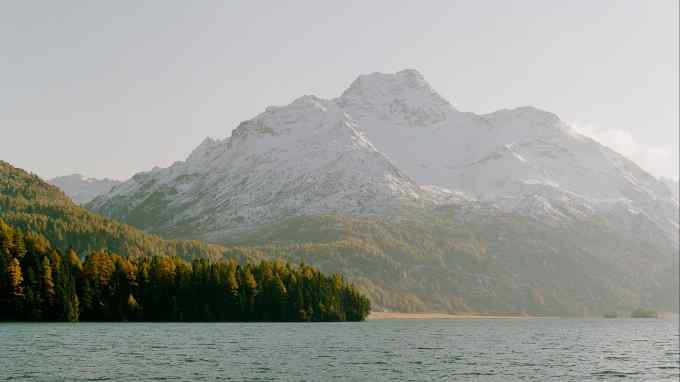