China stock market: the 29 minutes that shook the world

The 29 minutes that shook the world began on Thursday, January 7 at 9.30am Chinese local time when markets opened. At 9.42am, a sharp fall on the Shanghai and Shenzhen stock exchanges triggered a controversial new “circuit breaker” that halts trading for 15 minutes after a 5 per cent decline and closes the markets for the day after the blue-chip CSI 300 index is off 7 per cent.

When trading resumed at 9.57am, investors panicked. It took just another two minutes for the CSI 300 to set off the second circuit-breaker, ending the day’s session before, as Chinese investors joked, their “coffees had even cooled”.

At the same time, the renminbi was setting a freefall record of its own by declining 1 per cent against the dollar in just 10 minutes — a sharp move for the still carefully managed currency.

This week’s almost comic series of policy miscalculations followed China’s self-inflicted stock market crisis in July and currency confusion, also of its own making, in August.

Such events have raised questions about both the ruling Communist party’s commitment to capital markets reform and the competence of its top leaders.

China’s central bank sold down $108bn of the country’s foreign exchange reserves in December as it attempted to arrest the renminbi’s slow but steady slide against the dollar. President Xi Jinping had earlier argued, during his September visit to the US, that there was “no basis” for a long-term devaluation of the renminbi and said the renminbi-dollar exchange rate was “moving toward stability”.

But the People’s Bank of China has since demonstrated that it now has greater tolerance for renminbi depreciation against the dollar, as it instead seeks to keep the currency stable against a basket of 13 currencies.

“The assurances from the policy authorities that there was no basis for large-scale renminbi depreciation were taken as being very authentic,” says Richard Yetsenga at ANZ Research in Sydney. “[They] resulted in a relative lack of preparedness for further renminbi depreciation.”

Global markets had already tumbled on Monday in response to another 7 per cent fall and trading halt on China’s stock markets. But on that occasion the Chinese trading session at least lasted two hours and 33 minutes. 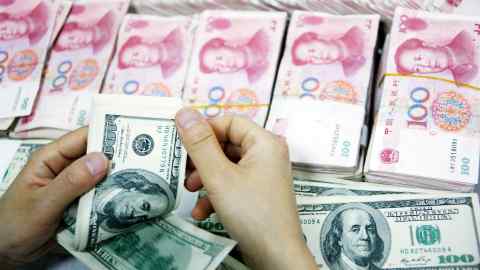 When European and US traders awoke to an even bigger Chinese shambles on Thursday, the reaction was derision tinged with a mixture of glee and fear — and it was not at all flattering of the country’s leadership. “I don’t trust anything about China,” said Jim Cramer, CNBC financial commentator. “Do they have any idea what they’re doing? I think that’s the biggest worry.”

There were plenty of plausible culprits for the panic including China’s market regulator, the central bank and even investors themselves.

The China Securities Regulatory Commission, which led a market rescue when the country’s stock markets fell almost 45 per cent in the summer, introduced the controversial circuit breaker on Monday and suspended it on Thursday. It also flip-flopped on a six-month share sale ban by large shareholders, which was supposed to expire on Friday but was extended in a bid to alleviate market panic.

“Whenever the CSRC says it is going to protect us, I know there is going to be market turmoil,” said one elderly Beijing day trader, who asked not to be named. “Why was trading halted? We were helpless.”

“The circuit breaker mechanism is not the main reason for the market drop,” the CSRC said in its own defence. “But based on the experience of the two recent instances, it hasn’t achieved the expected effect.”

Others blamed the central bank for failing to appreciate that its new currency policy might spook domestic and global investors. The People’s Bank of China blamed speculators. “Some speculative forces are trying to reap gains from playing the renminbi,” it said on Thursday, adding that the result had been “abnormal fluctuations”.

Regardless of who was to blame, all the policy reversals and finger-pointing did not give the impression of deft co-ordination between China’s various financial agencies.

“You’ve had the second largest week of renminbi depreciation ever, coupled with all those policy changes at the same time. It’s not really ‘crossing the river by feeling the stones’,” said Mr Yetsenga, quoting a Chinese idiom often used to describe the slow but steady progress of the country’s economic reform programme over the past four decades.

Others argued that in attempting to rescue a plummeting but still overvalued stock market last summer, the party has climbed on to the back of a tiger it now cannot get off.

Thanks to buying support from a “national team” of state-owned financial groups, China’s stock markets rose almost 30 per cent over the last quarter of 2015. This week they fell 12 per cent in just four days before stabilising on Friday.

“You’ve fundamentally got a market that is grossly overvalued,” argues Fraser Howie, an expert on China’s capital markets. “People are selling three-dollar bills for five dollars. So it should not surprise anybody that we once again have a correction.”

“Everyone has had plenty of time to bail out,” agrees Zuo Xiaolei, chief economist at Galaxy Securities. “But since the index had been mostly going up, nobody wanted to waste an opportunity to make money. Greed made everyone wait until the last minute before selling.”