US tech groups reluctant to make pledges on tax overhaul

The biggest US tech companies have not promised any specific new investments or jobs in the US in the wake of the country’s recent tax overhaul, despite being the biggest beneficiaries of legislation designed to unlock hundreds of billions of dollars of offshore cash.

While discussing their latest earnings this week, most also failed to promise the giant share buybacks many investors had been hoping for as a result of the tax concessions — though Apple stood out from the crowd with a promise to cut its $163bn of net cash to “approximately zero”.

Unless the iPhone maker breaks with its history of avoiding big acquisitions, the promise could signal the biggest return of capital ever made to investors, though the company did not put a timeframe on any such move. Apple said it would detail its plans in three months’ time.

There’s no change in our capital allocation framework

“Obviously as a result of tax reform we now have an opportunity to target a more optimal capital structure for our company,” Luca Maestri, chief financial officer, said in an interview with the Financial Times.

The Trump White House has heralded the tax treatment of offshore cash holdings as a big domestic job creator. The money has been building up in foreign accounts for years to avoid the extra tax that would have fallen due if foreign profits were repatriated to the US. Tech companies are the biggest single beneficiaries of the change, with the five biggest companies accounting for 35 per cent of all Corporate America’s offshore cash, or $680bn, according to rating agency Moody’s.

The tax law has freed up companies to use the money how they like, though they will have to pay a 15.5 per cent tax on their liquid foreign reserves, regardless of what they do with them.

Some tech companies have offered strong gestures of support for the White House by highlighting their domestic spending plans following the December tax change. For instance, Apple caused a stir last month when it conjured a figure of $350bn for what it called its “direct contribution” to the US economy over the next five years. Intel has also said that the tax overhaul will support domestic investment. But neither has indicated it is making any fresh expansion plans in the US as a result. 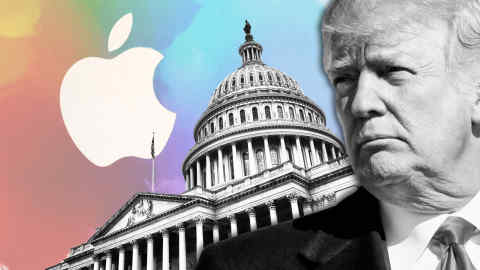 In analyst calls this week to discuss their latest earnings, talk of a new wave of domestic investment following the tax legislation has been even more muted. Microsoft, whose $132bn is the second largest pile of offshore cash, behind Apple, said it had already been able to make all the investments it wanted under the old tax regime, and didn’t expect anything to change as a result of the law.

One reason for the lack of change is that many companies have already borrowed heavily in the US to make up for their inability to freely use money kept offshore. Microsoft’s foreign cash reserves have jumped $75bn over the past five years, according to the latest figure released this week — exactly the same as the extra debt it has issued over the same period.

The borrowings have also meant that companies have been able to sustain large stock buybacks without needing to use overseas cash, making the new freedom to tap their foreign reserves less significant.

“We've been focused on capital return through both dividends and share repurchase as a key part of our commitment to total shareholder return for many years,” Amy Hood, Microsoft chief financial officer, told Wall Street earlier this week. “With the recent tax reform, we can continue that commitment without the need to access the capital markets.”

Among companies to turn their back on any big, one-off return of capital to shareholders, Alphabet announced that it was replenishing its regular buyback plans with the authorisation of another $8.6bn. “It’s just a modest increase to what we’ve been doing previously,” Ms Porat said.

The last time US companies were given a tax “holiday” to bring cash home at a reduced tax rate, in 2004, they were criticised for not investing more of the windfall to expand their domestic operations and create more jobs. Instead, almost all the money was handed to shareholders in buybacks and dividends.

Get alerts on Share buybacks when a new story is published