A year ago the Financial Times reported that the US justice system, one of the most sacrosanct institutions in American democracy, had become a political minefield. In the past 12 months, that partisan struggle has only intensified as US president Donald Trump and his Democratic opponents have turned to the courts at all levels and on nearly anything, turning the legal system into a political battleground. “The president, the Congress and even the courts themselves are all responsible for their constitutional irresponsibility,” says one legal expert.

Few legal areas show the nature of that fight more than immigration, where civil liberties groups are going after a president who vowed to “put America first” over a raft of anti-immigrant policies. These advocates see the courts as the place they can go to reimpose the rule of law at US borders.

The Trump administration’s efforts to deconstruct the regulatory state has also been met by fights in the courts, where state attorneys-general have sought to fill the gap through lawsuits. “Their targets are big consumer companies and state consumer protection laws are their weapons of choice,” is the verdict of a leading litigator. Faced with newly aggressive state government action, one law firm is pioneering use of predictive patterns to show which documents enjoy legal privilege. Just as important, it is relatively affordable, so even a smaller client will feel less pressure to waive legal privilege.

Although the politicisation of the legal system remains the overarching challenge to American lawyers, it is not the only big question facing the legal sector that we outline in this year’s report. All share a theme, however: the pressure to break down professional silos and work with other disciplines. The most innovative individual lawyer has bridged law and medicine, for example. He made it his mission to improve medical research by facilitating shared clinical trial data at a time of growing public concern over data privacy.

The interdisciplinary drive extends to in-house lawyers, as they push to be more active in developing new business ideas — “instead of being that function you visit when you’ve had a problem”, as one of them puts it.

This year we introduce the new category of “legal intrapreneurs” to salute individual trailblazers who have brought about significant change in their organisations — and some are not even lawyers.

The table below ranks partnerships between law firms, in-house legal teams and other organisations for the FT Innovative Lawyers North America awards 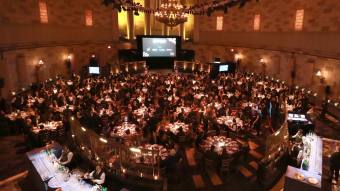