When the pandemic knocked US stocks from record highs in February, Paul Stappard, a portfolio manager for Deltec, a private bank, scoured the stock market for companies with a record of prospering during big bouts of upheaval. He landed upon a surprising candidate: BlackRock, the world’s largest fund manager.

Though tumbling markets typically cause fund managers’ assets and fee income to shrink, BlackRock has a history of outpacing its peers and the S&P 500 index of blue-chip stocks — and it has done so again this year, snatching market share as equity prices first slumped and then recovered.

By Wednesday’s close, its stock was up 30 per cent, year to date, versus a 7 per cent gain for the S&P 500. The fund management sector is down 3 per cent as a whole this year.

“If you look back through the [technology boom] and the great financial crisis, BlackRock outperformed its peers and its profits rose,” Mr Stappard said. “It has demonstrated over and over again the robustness of its business model.”

The company was a fixed-income specialist at the time of the dotcom crash — picking up investors who fled the stock market and enjoying the bond rally sparked by sharp interest rate cuts — before merging with Merrill Lynch’s fund management arm to broaden its equities exposure.

The hit to the big banks from the 2008 financial crisis allowed it also to swoop on Barclays Global Investors, then the world’s largest fund manager, in time for the longest bull market in equities since the second world war. That acquisition included iShares, the exchange traded fund unit that has grown seven-fold on the back of a massive shift to passive investing and now accounts for a third of BlackRock’s assets.

The iShares unit now accounts for 40 per cent of global ETF assets, but assets were still growing at an annual rate of 13.4 per cent in the third quarter as Asia and Europe played catch-up with the US in the trend to passive.

BlackRock amounts to a perpetual reinvention machine that has continually added new sources of growth, most recently from technology services to investors, including chunky contracts for its Aladdin risk management platform. Its $1.3bn acquisition last year of eFront, a risk analysis company, was the biggest deal for BlackRock since the Barclays purchase.

The combination of economies of scale from client inflows and these new tech revenues allowed BlackRock to set a new record for operating margin in the third quarter, which at 47 per cent would draw the envy of the tech companies that have led the market this year — but it raises the question of what BlackRock might do to expand its business from here?

The company has been conspicuously absent from a round of industry consolidation among fund managers. In February Franklin Templeton acquired Legg Mason and last month Morgan Stanley agreed to buy Eaton Vance, two major deals in part aimed at getting the kind of economies of scale enjoyed by BlackRock and the ability to sell a broader bundle of products to investors.

Analysts do not expect such defensive deals from BlackRock. Instead, they are focused on potential areas of expansion including two of the hottest corners of the fund business — alternative investments such as private equity and the rapidly expanding Chinese market.

In August BlackRock won the first round of approvals to launch a wholly-owned fund management unit in China after authorities removed ownership limits in April — the first step in allowing BlackRock to sell funds to retail investors in China, in addition to the private funds it has been able to offer wealthy and institutional investors for the past two years. BlackRock was the first global fund manager to receive the approval. New York-based Neuberger Berman and Fidelity International have also lodged applications this year.

BlackRock also received the first round of approval to operate a wealth management joint venture in the country with Temasek, a Singaporean state fund, and China Construction Bank.

China is set to overtake the UK as the world’s second largest mutual fund market after the US in 2023, according to Deloitte forecasts, and BlackRock is hoping the next round of approvals could come as early as June, chief executive Larry Fink told the Financial Times.

“Hopefully in the second quarter of next year we will have the licences in both [asset and wealth management] categories to be operational and then we can sell products in the country,” he said.

The company is also hoping to accelerate what has so far been a limited push into alternative investments. With many investors sceptical about future returns from an equity market that looks overheated and bonds whose yields have never been so low, they have been looking for alternatives such as private equity, private lending, hedge funds, real estate and infrastructure — but BlackRock is still to find its niche in an area dominated by the likes of Blackstone and Apollo.

The margin benefits if it manages to do so could be significant: even now, when alternatives make up 2 per cent of BlackRock’s assets, they deliver 10 per cent of its fee revenue.

In September BlackRock completed its fourth round of fundraising for Long Term Private Capital, its first private equity vehicle that invests directly in companies, which was launched last year. The fund now has $2.76bn, which it expects to jump beyond $3bn in another round of fundraising in December, according to people briefed on the matter.

But the total is short of the $12bn the company initially had hoped to raise. “We are continuing to grow flows,” Mr Fink said of the fund. “We’ve done a second deal right around Covid and we’re looking at one or two companies right now.” “Alternatives are still relatively small compared to their overall business but there have been pockets of growth,” said Kyle Sanders, an analyst for Edward Jones. “China is more of a question mark — every global asset manager has aspirations in China so they are competing against a lot of top players.”

Greggory Warren, an analyst with Morningstar who has covered BlackRock for more than a decade, said that while other asset managers were focusing on defensive mergers, BlackRock was able to proactively pursue growth in new areas.

“They have done an impressive job of identifying trends and products they need to provide for clients,” he said. “They seem to be a couple of steps ahead of everyone else.” 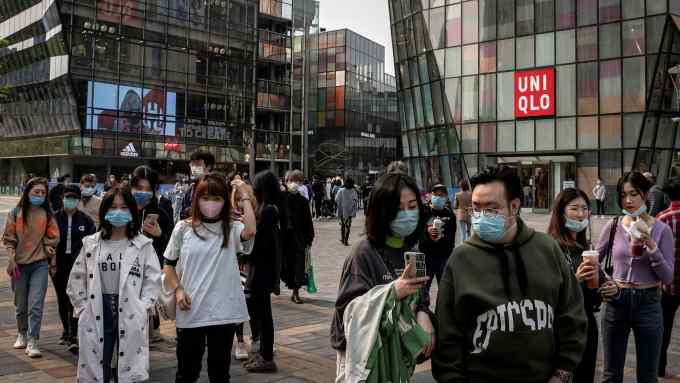