Murad Al-Katib has been named EY World Entrepreneur of the Year 2017, not only for his success in building a business empire focused on providing vegetable protein to the developing world, but also for helping to feed refugees.

Mr Al-Katib said he was very proud to be accepting the award in an audience of other country winners whom he admired, but also used his moment on stage to tell the audience that he believed that labels such as social entrepreneurship were out of date.

“There’s just entrepreneurship,” he said. “Social cause is not only important for business, it’s essential.”

“I’ve been given this platform now [by winning this award] and what I want to do is change the way that our businesses engage with their stakeholders around the world,” he added.

Jim Nixon, chief executive of Nixon Energy Investments and chairman of the independent judging panel, said: “Murad is an incredible entrepreneur who has demonstrated outstanding value creation, organisational reach and expansion. Through sustainable agricultural practices, he is making a positive impact on the global environment.”

The Canadian, born to immigrant parents, was picked from 59 individuals representing 49 countries. 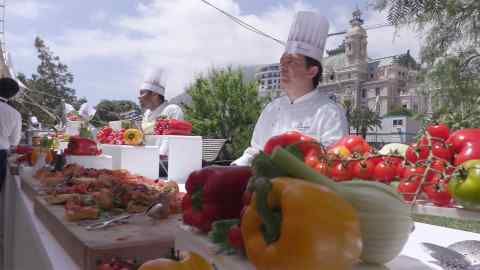 Mr Al-Katib enjoys telling the story of how when he gave up his job in 2001 and started writing the business plan for his lentil company, it was a particularly bad time for his wife, who was pregnant at the time and expecting twins. But he has turned that plan into a business empire supplying lentils, chickpeas and peas to more than 120 countries.

The company, AGT, went public in 2007 and has been increasing revenues by an average of more than $100m a year to $1.4bn in 2016. It has made 17 acquisitions in 15 years and now runs 46 manufacturing facilities and employs 2,000 people around the world. AGT produce accounts for more than 20 per cent of world trade in lentils, he says.

He has also used his manufacturing and distribution network to deliver more than 4m family ration packs to international agencies for Syrian refugees under the UN World Food Programme.

In 2016, he was named Global Citizen Laureate by the United Nations Association in Canada. In March this year he was one of four people (including Elon Musk the founder of Tesla electric carmaker and SpaceX) honoured with the Oslo Business for Peace Awards. Mr Al-Katib received the award for his contributions to sustainable agriculture and feeding refugees.

“When I look at the emerging markets of the world . . . you know a basic building block of civil society is actually available food. A baby is hungry, they cry. A young man is hungry, they actually get angry. It’s civil unrest. It’s war,” Mr Al-Katib told the FT in a video interview earlier this week.

He explained that he was particularly motivated to provide protein in vegetable form as opposed to meat because meat production takes a greater toll on the environment.

“Water is one of our scarcest resources,” he said, pointing out that lentils require far less water to grow than beef. “In order to meet our food targets in the future, we need to create 2bn vegetarians,” he said.