It was once seen as a symbol of colonial oppression. But as power passed from one distant capital to another, the colonial era is now looked on with a little more dispassion and Hong Kong’s old Central Police Station, once one of the territory’s more forbidding institutions, has been reimagined as an arts centre.

Colloquially known as Tai Kwun, “Big Station”, it was built on the edge of Hong Kong Island’s fast-growing downtown in the early 1860s, a one-stop shop for justice incorporating not only a police station and barracks but also a magistracy and the Victoria Prison. It is where Ho Chi Minh was imprisoned in the 1930s, where the Japanese army established a base during the second world war, where war crimes trials were subsequently held and where the military units that quashed the 1967 riots were stationed.

By the time it was decommissioned in 2006, the site was in the middle of a teeming city and probably one of the most valuable plots in the world. Yet somehow, this charged space survived. A non-profit joint venture between the Jockey Club and the Government of the Hong Kong Special Administrative Region was established to maintain the building and transform it into a cultural institution. Progress has been slow, but, after an interlude caused by the collapse of a wall a couple of years ago, the Tai Kwun Centre for Heritage and Arts is finally opening next month.

The problem for Herzog & de Meuron, the Swiss architects charged with the task of transforming Tai Kwun, has been how to open up a determinedly defensive structure. Working with conservation architects Purcell, they have treated the historic structures with almost surgical care, woven new public routes through the complex and, somehow, also carved out a collection of compelling, original and utterly surprising spaces.

Their most conspicuous intervention has been to add bulk to the building in the form of two perforated, aluminium-clad boxes, poking above the chunky walls. These are meant to evoke the solid brickwork of the prison architecture, to create a new layer of stacked solidity. But they are also quite clearly screens, their permeability subverting that solidity. Each three-dimensional cast panel has been cut back to a different degree creating a different sized and shaped oval opening and the effect is somewhere between op-art, a strange new machine and a Chinese palace screen.

The architects have exploited the site’s topography by jacking up a new auditorium building and setting a generous stair below it, which acts as a kind of amphitheatre. In some cities you’d worry that this was merely a gesture, a dark, leftover undercroft destined for neglect. But in Hong Kong, where public space is so rare and benches are like gold dust, where the heat makes shade so welcome and where even the escalator links are used as picnic spots, this space will surely thrive.

The public front of the building remains the 1919 Police Headquarters Block on Hollywood Road, executed in a kind of sub-Lutyens red brick municipal style, now opened out to accommodate restaurants and retail. Behind it, the rather more elegant and arcaded Edwardian Barrack Block exhibits a slightly Raffles-ish air of colonial/tropical urbanity. The new Arbuthnot Auditorium, clad in Herzog & de Meuron’s distinctive aluminium modules, is squeezed between the solid classical Central Magistracy and D Hall, a surviving wing of the prison. The cells have been conserved and retained, intact with their steel grated doors and the utilitarian paraphernalia of penitentiary design — the cell numbers, locks and conduits, the flaking paint and institutional claustrophobia.

The main new art gallery is in a new block facing Old Bailey Street. Set above a see-through level containing a restaurant and public terrace, which reconnects the interior to the city, the exhibition space itself is big and surprisingly neutral, a cool, column-free, top-lit box. The architectural expression is left to the connective tissue, the winding, sculptural concrete stairs, the surprising connections and bridges, the tight spaces between blocks, each giving a glimpse of almost Piranesian perspectives that seem totally in character with the nature of the former prison. Tai Kwun’s other new gallery is in F Hall, a similarly versatile space, though this time punctuated by the fragments of the historic structure (surprisingly, a former print workshop).

The whole ensemble revolves around two retained courtyards, the former prison yard and parade grounds. It is these open spaces that make this such a potentially public place. Destined to be heavily programmed with various types of event, these yards are what will embed this long-closed complex into the consciousness of the city.

For a territory with such a culture of construction, the construction of culture seems to take a long time in Hong Kong. This project might once have opened at the same time as the huge M+ museum for visual culture, over the water in Kowloon and currently also being built by Herzog & de Meuron, but that is now projected to open next year. (The Swiss architects will have a virtual monopoly on public art space in Hong Kong.) They couldn’t be more different structures — one a work of meticulous intervention in a historically freighted site, the other a work aiming to create an identity for a piece of emerging and still half-formed city.

Tai Kwun, despite the scale and ambition of M+, now has a head start, the potential to establish itself first at the centre of the city. It’s encouraging that, in a city where real estate values are arguably more obsessed over than anywhere else in the world, the most valuable site should be devoted to public culture. 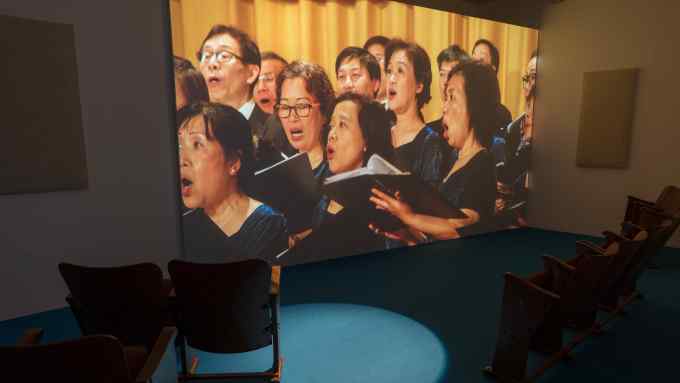