The UBS VIP lounge is the inner sanctum of Art Basel Miami Beach, accessible only to a select few approved by the Swiss financial services firm that is the art fair’s key sponsor. When it was seeking an artist to decorate one wall of this hallowed den, Sarah Morris was the perfect choice. For when she describes the lounge as a “network of layers and interfaces which is somehow engulfed in a larger system [from which] you don’t know how to get out”, she could also be talking about her own art.

Now 51, Morris, with her sleek dark bob, gold hoop earrings and vintage Chanel dress, looks quite at home in the exclusive surroundings. Born in the UK, she has spent most of her life in New York, where she constructed her career — which encompasses solo shows at the Palais de Tokyo in Paris and the Ullens Centre for Contemporary Art (UCCA) in Beijing — from a hybrid practice of painting and film-making.

Even before she moved there, Manhattan beckoned like a Utopia. As a very young child living in Rhode Island, she remembers the excitement of preparing for a trip with her parents. “I remember that I was really excited to know that I was going New York to see the Museum of Natural History,” she says with a grin. “I remember thinking ‘I’m going to my future’.”

As an adult, Morris has made films — about New York and other cities — that reveal a gift for glancing sideways at metropolitan living, as if people, buildings, traffic and the stories they inhabit are elements in a big picture only she can see.

Her paintings are devoid of figuration. Sleek, graphic, frontierless grids boasting the uncompromising chromatism only household gloss can provide, they are as smooth as prints and as silent as graves. It is as if Morris has machine-processed the building blocks of city life into geometries so inexpressive they make her abstract predecessors — Mondrian, Barnett Newman, Ellsworth Kelly — look as emotional and romantic as late Monet.

For the UBS Lounge, she has created a unique printed wallpaper in archival ink on paper entitled “War of the Roses (Sound Graph)”. Dominating one wall of the room, the vast image is a shuddering skin of multicoloured cylindrical bars, as if a digital graphic artist has been inspired by the pipes of an old-fashioned church organ.

A sound recording was indeed the basis for “War of the Roses”. Its origin was an interview Morris had with the German intellectual Alexander Kluge for Finite and Infinite Games, her 2017 film about the Elbphilharmonie, the eye-poppingly expensive concert hall — it cost €866m — built by architects Herzog & de Meuron in Hamburg in 2007-16.

To create the pattern of “War of the Roses” (and for the paintings in the sequence Sound Graphs to which the wallpaper is linked) Morris put the sound files of her conversation with Kluger though synthesisers, then used various computer programmes to plot the co-ordinates of the audio recording. She then used these co-ordinates as the basis for her compositions.

That tale becomes particularly intriguing when Morris explains that her film about the Elbphilharmonie is designed to act as a “manifesto or warning . . . against this level of hubris, this level of waste, of aspiration.”

Is this swipe at extravagance not contradictory, given that UBS, which is among the world’s leading wealth managers, is her stalwart client, with over 30 works by Morris in its collection?

“It’s an irony,” admits Morris. “But art is capital. It has always been used by various groups of people. This is not news . . . It’s not that interesting a subject.”

But it is surely relevant because Morris’s muse is, essentially, power: its architecture, its finance, its inner, abstract face. Her 1997 series Midtown emerged as she was thinking about the “rise of the global corporation and what exactly that means”. In 2000, she shot a film in Washington entitled Capital during the last days of the Clinton administration.

The illegibility of her work, particularly her paintings, is the safety net that allows her neither to bite the hand that feeds nor become its stooge. “My work annoys people because it is so open. They might think it is a celebration of capitalism . . . but that’s a misdiagnosis; just because it is open doesn’t make it affirmative or negative. It means it has that possibility, that ambivalence, that openness, that teetering on the edge.” 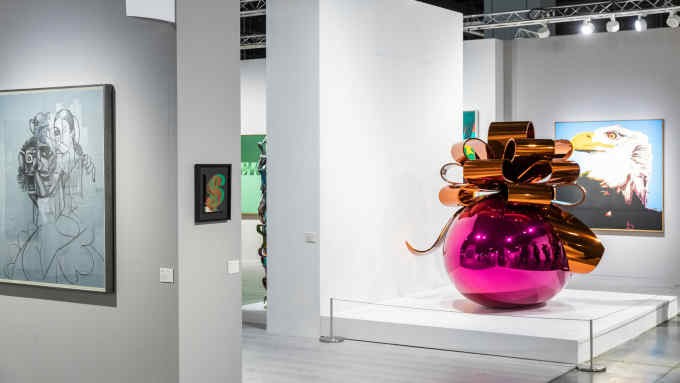