Let them Roar — the London matinee attended by 200 babies

Generally speaking, if you are in a West End theatre and the audience members around you are variously wailing, sleeping or blowing raspberries, it’s not a good sign. But at this week’s matinee for Emilia at London’s Vaudeville Theatre, this state of affairs was actively encouraged — by the playwright, cast and theatre management alike. This was the “Let them Roar” performance, to which parents were actively encouraged to bring tiny offspring (12 months and under), enabling both adults — and babies — to see the play. Tickets were pegged at between £25 and £35. As a result, the auditorium was host to some 200 babes in arms and their parents and carers.

“We’re the first,” said producer Nica Burns, beaming, as she and her fellow-producers took to the stage before the performance to outline the arrangements: baby changing facilities were in the first-floor bar; there were bottle warmers ready and waiting; audience members were free to come and go as they pleased; buggies had been hauled to a storage space five floors up by a group of volunteers.

The event came about because playwright Morgan Lloyd Malcolm responded on Twitter to a query by a mother who wanted to see the show but needed to fit it with breastfeeding her baby. Lloyd Malcolm offered to babysit for her throughout the performance, but the producers spotted the potential for a wider response.

The initiative builds on the improving attitudes towards accessibility for audiences — with many cinemas offering baby-friendly screenings, and theatres offering “relaxed”, captioned, BSL-signed and audio-described performances — but it also reflects the specific response to Emilia. Telling the story of Emilia Bassano, thought by many to be Shakespeare’s “Dark Lady”, but also a writer herself, the play makes a passionate and determined plea for equality and recognition for women.

Theatre videographer Ben Hewis was so impressed by the show’s empowering message that he mounted a crowdfunding campaign to enable young women to see it who might otherwise be unable to afford a ticket — it raised enough money to send 100 people. The actor Jade Anouka also enabled a group of young people to see the play, using leftover funds from a campaign to mount a special screening of the film Black Panther. Several individual theatregoers have spontaneously offered up tickets on Twitter, and a book club, passing the text around, has also sprung up.

Back in the stalls, the younger audience members may not have been quite up to speed on the play’s satirical depiction of Elizabethan society in general and Shakespeare in particular, but many of them liked the musical interludes — to the point of joining in — and a small theatregoer in front of me was transfixed at the sight of washerwomen stringing up a line of smalls across the auditorium. One of my neighbours fell asleep — but then you could say that of many an audience. The cast took the occasion — and the noise — in their stride, some of them improvising around the more vociferous interruptions. Meanwhile, the scenes in which Emilia gives birth got a particularly heartfelt laugh.

It was certainly loud — Lloyd Malcolm remarked afterwards that, if repeating the event, she would add captions to help audience members follow the quieter sections through the hubbub — but it was also an uplifting occasion. And, remarkably, the whole audience — babies and all — fell suddenly and completely silent for Emilia’s final rousing speech, which is surely among the finest critical accolades the show has received.

Explore the series
READ MORETheatre to watch in London and beyond
Young lovers are the beating heart of Noughts & Crosses at the Theatre Royal Stratford East, London 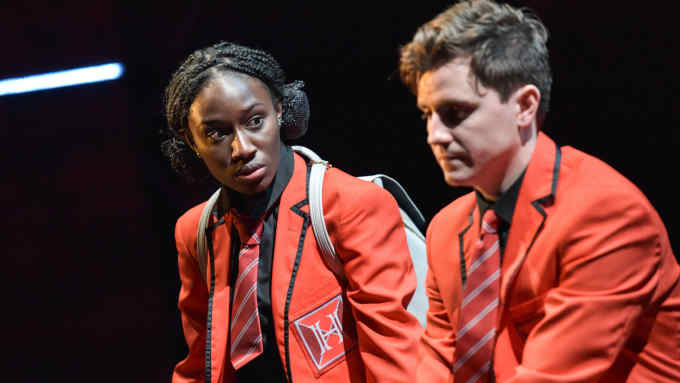