If you think the same, join us
How To Spend It Fashion accessories

How I Spend It… Paul Feig on walking sticks

The Bridesmaids director, actor and filmmaker needs no excuse to unleash his inner dandy

I’ve always been a lover of affectations for men. As guys, there’s so little we can do. We have a suit, and so you can play with your tie and your pocket silk and cufflinks and watches. But there’s not a lot to take it to the next level. I’m not necessarily a fan of heavy dandyism but it’s nice trying to find things that will set you apart.

I’ve always been fascinated by walking sticks. In London for the first time with my wife, 30 years ago, I heard about the famous umbrella store James Smith & Sons, near Covent Garden. I thought having a walking stick would be fun, but at that point I was in my late 20s and decided it was a bit much of a leap for people to take me seriously. So I thought, “Umbrellas, that’s the way to go.” Especially when you’re in London. Unlike in LA, you don’t need an excuse to carry an umbrella.

But when I walked into the store, I couldn’t resist the walking sticks and bought one – just to, you know, have it. In truth, it was more of a cane than a walking stick. And for those in the audience who don’t know the difference, I define a cane as something you need to support yourself with and a walking stick as something you don’t. Anyway, it had a faux-scrimshaw head on it that had a picture of Shakespeare’s Globe Theatre. At the time I said to myself, “I’m going to start collecting these, but I’m not going to allow myself to use them full‑time until I turn 50. And then when I turn 50, I’ll be old enough for people to say, ‘OK, that’s something he does and he’s a gentleman.’” When I turn 70 and actually need a cane, everybody will be used to seeing me with a walking stick and they’ll just say, “Oh, that’s him with his walking stick”, not realising I’m walking around with something that’s not just for show.

My wife thought I was nuts. But I was able to justify it because I’m a writer and back then especially I was obsessed with Shakespeare, so I could say, “It’s just a Shakespeare thing.” And then, whenever we went to London (because we started going a few times a year for her work), I would stop in James Smith. The real breakthrough for me was a smooth 1920s bamboo walking stick. It had an L-shaped top and a beautiful cap that was made of pounded gold. It was a proper what they call swagger stick. And at that moment, I thought, “I don’t know if I’m going to be able to make it to this 50-year mark. I might want to start doing this now.”

You have to own a walking stick. Like when a friend buys a guitar and he’s starting to learn and he goes, “I want to play you something,” and he’s all hunched over it. You go: “That guitar owns you, you have no say over that guitar.” Then you watch footage of Jimi Hendrix who’s flopping it around and you go, “That dude owns the guitar.”

That to me is how you have to be with style, with suiting, with everything – and especially with a walking stick. When I started venturing out with this walking stick, it felt great, and I got just enough compliments from people I respect. That’s catnip for any of us who are prone to dandyism.

The full-fledged addiction began when I went to Budapest to make the movie Spy, in 2014, and discovered Falk Miksa Street, with all its antique shops and places for old walking sticks that came out of Germany, Russia, Austria and eastern Europe. My wife wanted to murder me because I probably bought, over the course of the six months, 30 to 40 sticks. Of course, then they saw me coming, so they all jacked the prices up. Currently I own about 70 or 80 in my collection and they’re my pride and joy. When I write or I’m trying to think, I’ll walk around the room with a stick in my hand and twirl it around to help me.

My goal in life is to bring back every antiquated men’s affectation that I can. A friend and I always joke that the cape is the next thing we’re going to try to resuscitate. And if I could snap my fingers and have one thing that I could wear every day and nobody would ever give me a hard time about, I would wear a top hat.

There’s this guy in a basement apartment in Chelsea who collects and renovates old top hats. This past year I went to him and bought a hat from 1900. Sometimes I say, “Fuck it, I’m just going to wear it.” I wear it around the house. And trust me, one day you’ll see me walking around in a top hat.

Buy a ticket to watch Paul Feig perform cocktail hour at the 2020 Financial Times Weekend Festival, and have access to all the three-day festival’s content 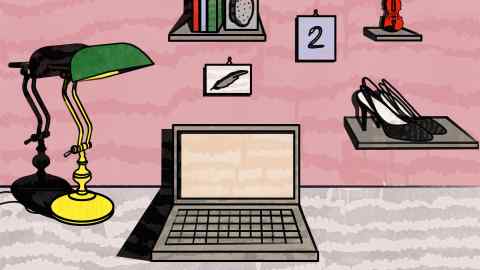 Get alerts on Fashion accessories when a new story is published