Richard Milne in Oslo and Andres Schipani in Nairobi

The Danish parliament approved a law on Thursday that will allow Denmark to process asylum seekers outside Europe, in a move that has drawn anger from human rights advocates.

Under the measure, Denmark can send asylum seekers to a third nation, most likely in Africa, to have their claims assessed.

The UN High Commissioner for Refugees has denounced the move as a “frightening race to the bottom” that is against the principles of international asylum co-operation.

Demark has gained a reputation for adopting one of the toughest stances on migration in the EU, under immigration minister Mattias Tesfaye, a Social Democrat who is himself the son of an Ethiopian immigrant.

Tesfaye said Denmark had “identified a handful of countries” that it was talking to about reception centres but stressed that any transfer of asylum seekers “must be in line with our international obligations”.

The country is the first in Europe to declare the area around the Syrian capital, Damascus, safe for refugees to return to. The government has also taken tough domestic measures, including forced evictions in migrant neighbourhoods to try to break up what it terms ghettos in several Danish cities.

“The current asylum system has failed. It is inefficient and unfair. Children, women and men are drowning in the Mediterranean or are abused along the migratory routes, while human traffickers earn fortunes,” Tesfaye told the Financial Times, adding that “a key aim” was to reduce the number of “spontaneous” asylum seekers to Denmark. 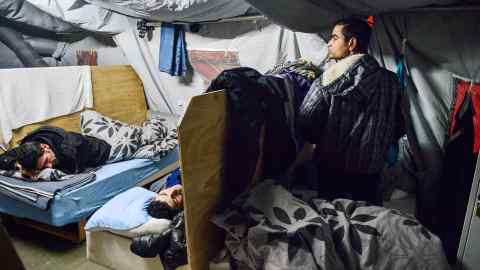 Denmark’s is only the latest attempt by European countries to set up asylum camps in Africa. In 2004, then UK prime minister Tony Blair tried to persuade Tanzania to process asylum claims but failed.

Some leftwing lawmakers criticised the government for not outlining which third country it would use, saying they refused to give it “carte blanche”. But attention has focused on Rwanda after Tesfaye and another Danish minister travelled to the capital Kigali in late April, and signed a memorandum of understanding on asylum and migration.

The agreement did not include anything on the processing of asylum claims and Kigali made it clear that “receiving asylum seekers from Denmark” was also not part of the deal. But Amnesty International warned that any attempt by Denmark to send asylum seekers to a third country would be “not only unconscionable, but potentially unlawful”.

Rwanda has a tradition of welcoming refugees, and hosts about 130,000 of them, mainly from neighbouring Burundi and the Democratic Republic of Congo. Although earlier plans to relocate African migrants from Israel to Rwanda fell through in 2018, a so-called Emergency Transit Mechanism centre, or ETM, was established the following year in Gashora.

The move came after the Rwandan government, the UNHCR, and the African Union signed a deal to shelter refugees and asylum seekers who had been held in detention centres in Libya. More than 500 refugees — mainly from Sudan, Eritrea, Ethiopia and Somalia — have been sent from Libya to Rwanda.

On Thursday, the European Commission said it shared the UNHCR’s concerns and that processing claims in a third country raised “fundamental questions about both the access to asylum procedures and effective access to protection”. It added that it would analyse the Danish law before deciding on any further steps.

Get alerts on EU immigration when a new story is published