Amy Kazmin in New Delhi and Farhan Bokhari in Islamabad

Pakistan and India were facing their worst conflict in almost half a century on Wednesday after an Indian military jet was shot down over disputed Kashmir territory and an Indian fighter pilot was captured by Pakistani forces.

Tension between the nuclear-armed neighbours has escalated sharply since India carried out a “pre-emptive strike” on a terrorist training camp in Pakistan on Tuesday, saying it had killed a “large number” of prospective jihadis. Islamabad denounced the strike and vowed to retaliate.

India confirmed that Pakistan had shot down one plane and captured its pilot after Islamabad yesterday released video footage of Wing Commander Abhinandan Varthaman. Pakistan said that it had downed two Indian aircraft.

India said it “strongly objected to Pakistan’s vulgar display of an injured personnel of the Indian Air Force”. It demanded his “immediate and safe return”, saying Islamabad would be “well advised to ensure no harm” comes to him.

Relations between India and Pakistan have plummeted since a suicide bombing on February 14 that killed 40 paramilitary police in India’s Kashmir region. The attack was claimed by the Pakistan-based Jaish-e-Mohammad (JEM) militant group. India accuses Pakistan of giving free rein to terror groups operating from its territory.

Can we afford miscalculation given the weapons you have and we have?

Imran Khan, Pakistan’s prime minister, called for dialogue between the two countries, recalling that “some of the world’s biggest wars were triggered through miscalculation”.

In a video message released yesterday the cricketer-turned-politician asked India: “Can we afford miscalculation given the weapons you have and we have?”

There was no immediate response on Wednesday from senior Indian politicians, who had been triumphant after Tuesday’s strike inside Pakistan.

As the conflict escalated, India sealed off several airports close to the border — including Jammu, Srinagar and Amritsar — to civilian air traffic, while Pakistan’s Civil Aviation Authority also said it had shut its airspace to all commercial flights.

Video: Why India-Pakistan tensions are escalating with airstrikes

China, the US and the EU all urged both countries to show restraint. The hostilities are the most serious between the nuclear-armed countries since 1971, one of three wars India and Pakistan have fought over Kashmir, a mountainous Muslim-majority region that both sides claim as their own.

A Pakistani official in Washington called on the US government to do more to broker peace between India and Pakistan.

“The US is an important player in managing the conflicts between Pakistan and India, we would like to see more involvement from the US”, the official said, adding that the conflict was a “serious threat to peace and security”.

Ajai Shukla, a former Indian army colonel, said the captured pilot could offer a way to de-escalate if Islamabad returned him unharmed. “Both sides have got a face saver,” he said. “Pakistan can make a big production of handing over the pilot, showing they displayed maturity and responsibility.” 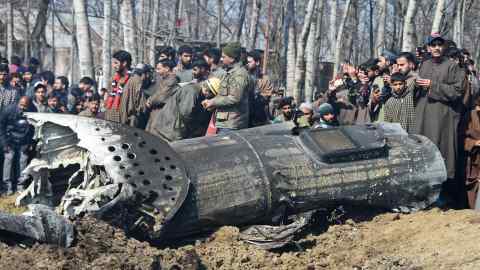 Pakistan on Wednesday said it carried out bombing raids along the Kashmir line of control and from within its airspace, adding it had avoided loss of life. It said the strike was “not a reaction to continued Indian belligerence” but to “demonstrate our will, our right, our capacity for self-defence. We have no intention of escalation but are fully prepared to do so if forced into that paradigm.”

This came 24 hours after India said its warplanes carried out the strike on the JEM terror camp in the Balakot region, after receiving “credible intelligence” that the group was planning further attacks in various parts of India.

Pakistan’s military said the Indian bombs had fallen in a wooded area where they did little damage and caused no casualties.

A senior Indian official on Wednesday said: “We will act responsibly with restraint and do not want to see a deterioration in the security situation in our region”. But he also urged the international community to press Pakistan to take “immediate, concrete and verifiable action to deal with terrorism emanating from their soil”.

A Pakistani foreign ministry spokesman said: “If Pakistan doesn’t stand up to defend itself, tomorrow the Indians will begin attacking other places.”